Between 1941 and 1957, South-Philly pool player Willie Mosconi won the World Straight Pool Championship 15 times. His trick, he claimed, was that he always thought five shots ahead.

That piece of history resonates with Rich Gorelick, both because of its historical significance and as an example he can learn from.

Years ago, long before receiving his law degree from the University of California, Berkeley, or becoming the senior attorney at Integra LifeSciences, a leading global provider of medical devices and technologies to orthopedic and neurosurgeons, he majored in history at Princeton. 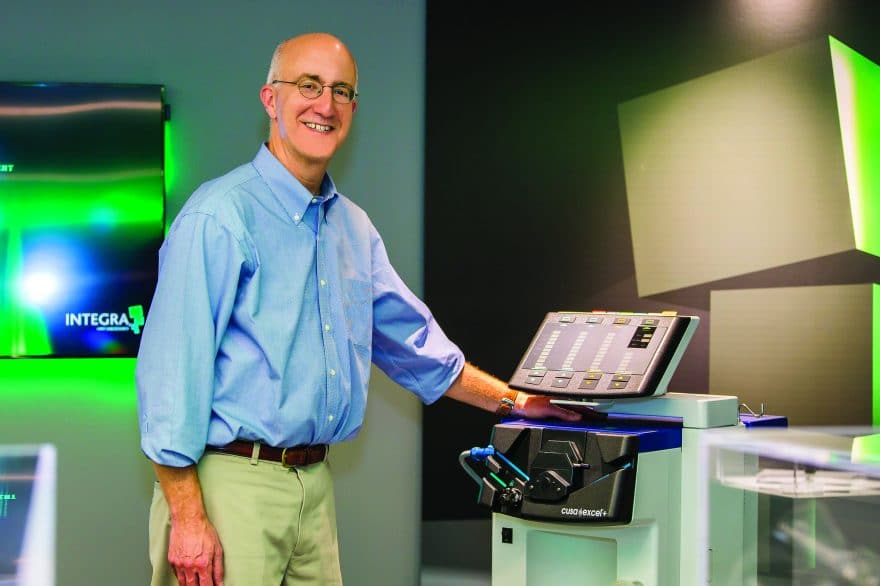 This background provides Gorelick with an endless supply of role models and lessons that have shaped his beliefs and work philosophies.

“The world’s constantly moving, so you have to embrace change,” he says. “You learn from the past; you have to work vigorously in the present, all the while planning for the future.”

Like Mosconi, Gorelick also thinks ahead, an essential skill for general counsel at a medical technology company that’s grown from $70 million to just shy of a billion dollars in revenues since Gorelick joined 16 years ago.

“I have found by having read a lot of history, there are always situations or biographies that can give you ideas about how to get something done,” Gorelick says. “If it’s your own success, that gives you confidence, but if it’s Omar Bradley’s success or the success of President Obama, you can examine how it was done and maybe take away lessons from it.”

Taking a cue from Mosconi, Gorelick thinks ahead.

“I say to my team, ‘Let’s think five steps ahead. If we can think of possible scenarios and anticipate possible outcomes, we may just avert another problem in the future,’” he says.

At the same time, Gorelick helps his 35-person legal team do this nimbly, so that they don’t get paralyzed. He knows that you can plan all you want, but some things don’t go according to plan. For that, you have to be flexible.

While Gorelick values history, he’s careful not to be the guy who sits down at lunch and talks about how things used to be done on carbon paper, before computers.

After all, if history has taught him one thing, it’s that the world changes, and as he says, “It’s better to be an agent of change than a victim of it.”

When Gorelick started with Integra, the company was small and he was on the front lines, negotiating and drafting deals. Today, he is more of a coach to the people who are on the front lines and an architect for the delivery of legal services. He helps them determine the best approach—when to aggressively pursue something and when to take a more moderate approach—and serves as a strategist.

“You have to evolve the practice constantly because the world evolves,” he says. “As a partner to the business, we need to have a strong understanding of changing market dynamics, while staying true to our mission to provide timely, wise, cost-effective and proportionate advice.”

Just as Gorelick uses history for perspective, he encourages the 15 attorneys he advises to have alternative ways of engaging at work, which is essential, he says, at a company with many different issues and many smart, talented people.

“We try to support our lawyers here so they become sought-out counselors and help lead, mentor, coach, teach and help us achieve the very broad business goals that we’re all united behind,” he says.

He emphasizes the importance of developing ‘executive presence’, presentation skills, professional reading on a wide variety of topics, learning the business, knowing the role that each department plays across the company and anticipating their issues. Because the legal team plays a critical role in helping each of Integra’s divisions achieve their business goals, its tasks can range from helping determine the best way to facilitate sales to assisting with product development agreements, responding to SEC comment letters during acquisitions or, as with Integra’s former spine division, supporting the spin-off of a division into its own entity.

“This is really about the team,” Gorelick says. “The company’s success is not because of the efforts of a handful. It’s because of the many people across the company around the world, working well together to accomplish great things. Just like other historical figures, my role is to encourage, inspire and bring the best out of my team to be strong partners working together in business.”

By playing this part, Gorelick can help his team contribute to the company’s history of success and help surgeons in their quest to give the patients the best care possible.