Matt Bell’s interests have always been oriented toward building businesses. As a student of modest means at Oklahoma Christian University, he ran a gutter cleaning operation and a snow cone stand on the side. Never one to shy away from a challenge, as a freshman he cajoled a fifth-year senior to go out with him and a few years later to agree to be his wife.

Businesslike and persuasive growing up, he had been encouraged to consider applying those attributes to law. One of his wife’s relatives was a professor at Faulkner University in Montgomery, Alabama, and encouraged him to consider the lesser-known school. Bell decided to attend Faulkner over his other options, garnering a full scholarship at Faulkner Law where he served as managing editor of the Law Review and won national awards for his moot court skills. Being relatively debt-free enabled Bell to pursue a Master of Laws from the John Marshall Law School where he would find his passion: international trade. 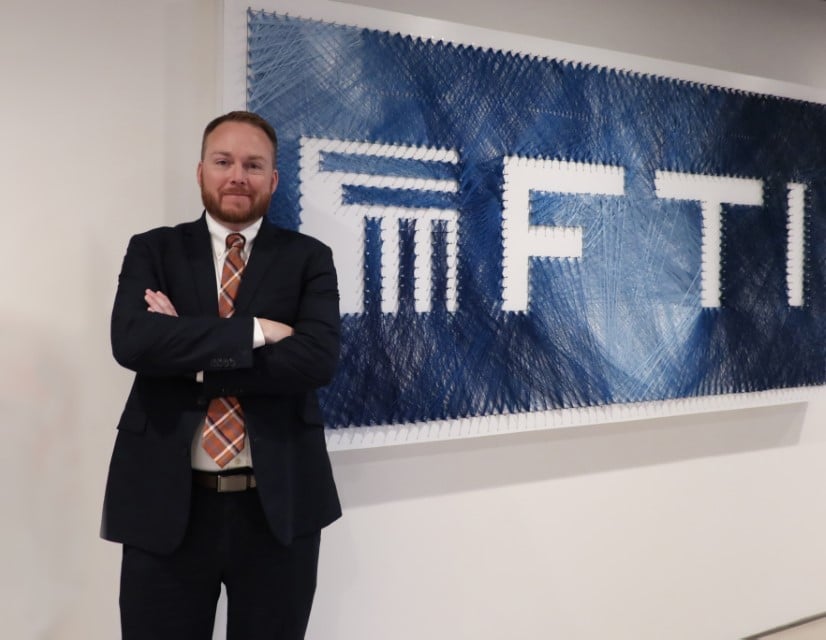 But his degree was no quick ticket anywhere, the economy having crashed in 2009, right around when Bell was graduating with the highest honors. It proved to be one of the many times when his persistence paid off.

“I applied to over 1,000 jobs using headhunters and search firms—we tailored cover letters, I networked like crazy and got one interview with U.S. Customs in Miami and did not get the job,” Bell recalls during a Vanguard interview.

Then a friendly lawyer and classmate at John Marshall encouraged Bell to apply for the same KPMG position he had wanted. Because U.S. citizenship is required when export controls are involved, he wasn’t eligible. Shortly after the interview, KPMG went on a hiring freeze.

“I was crushed, but we stayed in touch and, true to their word, they hired me six months later when the freeze was lifted,” Bell says.

He’d start his career in international trade in Mountain View, California—the heart of Silicon Valley—where he quickly became engrossed in encryption export controls and the technology and telecom industry. He’d then take his skills to Ernst & Young (EY), another Big 4 professional services firm, and move to Dallas.

“EY allowed me to really grow as a professional and help Fortune 100 companies build their compliance programs, sometimes from the ground up,” he says.

Since EY, Bell has built up an impressive resume of in-house experience with three multinationals, been a part of multiple settlements with various U.S. agencies, managed monitorships and government-mandated audits, and helped solve political and legal challenges at the highest levels—all by the age of 36.

Having come to FTI Consulting earlier this year, Bell is well positioned to bring his unique perspectives to any company seeking to build a compliance program, investigate potential violations, or make disclosures to authorities. While he is no longer practicing law, he hopes his legal background and experience will help him partner with law firms and their clients to marry the legal requirements with the practical realities of business.

A world of its own

FTI Consulting is a global firm offering a broad range of services, including one of the world’s top restructuring practices which helped pull Lehman Brothers and General Motors out of bankruptcy, made sense of Bernard Madoff’s fraudulent schemes, and even aided Major League Baseball’s steroid investigation of the 2000s. 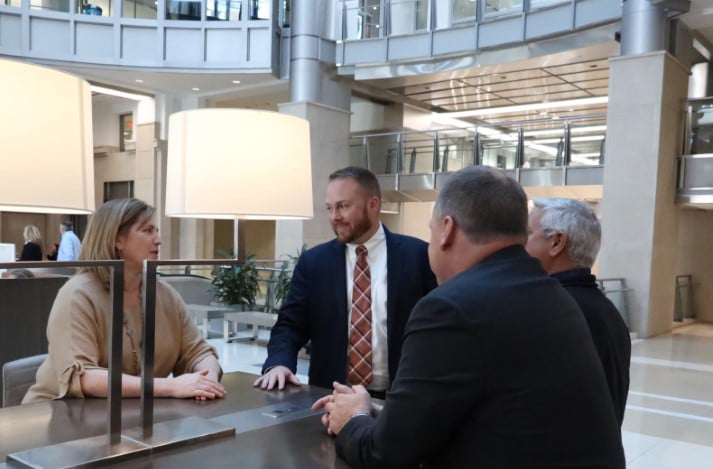 “FTI is full of exceptional professionals across the firm who are leading experts in their fields from cybersecurity, data and analytics, and strategic communications, to forensic investigations, and so many other areas,” he says. “The vision of the leadership and the chance to partner with such outstanding colleagues to bring holistic solutions to our clients really attracted me to FTI.”

Last March the company created a division to consult on matters that appear in just about every news cycle—export controls and sanctions— and it chose Bell to be the global practice leader and architect of this new offering.

“Now when I tell someone what I do, they know what I am talking about right away,” Bell says. “This used to be such a niche area of the law, but now it’s so intertwined with geopolitics and global economics.”

Sanctions are now an issue that every company around the world is dealing with given the U.S. government’s strong focus on both primary and secondary sanctions.

Many of FTI’s clients sell so-called dual-use technologies across borders—technologies that have both commercial and military uses—and understand this area well. 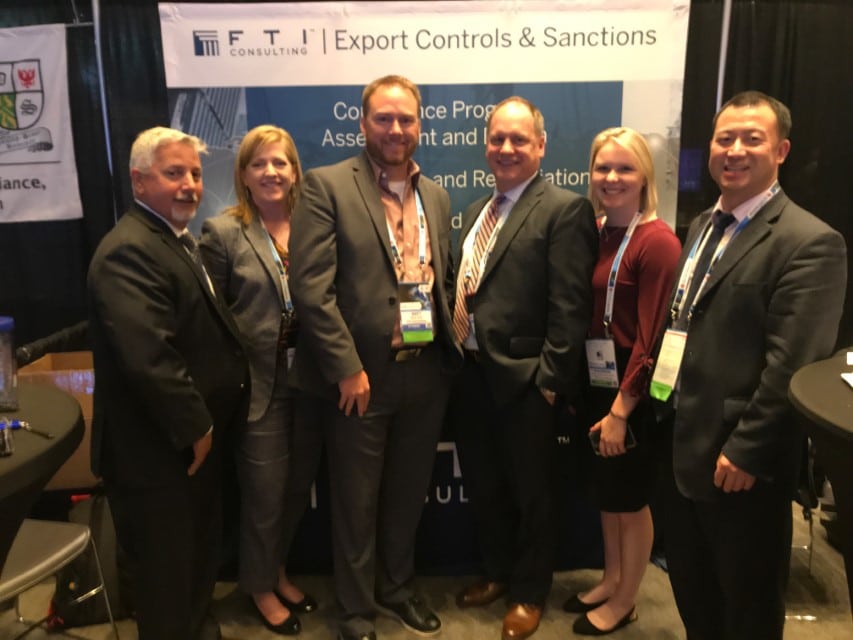 “Like any good adviser or consultant, you need to help your client implement practical solutions and prepare them for what is coming around the corner or down the road, or whatever analogy you choose to use,” Bell says. “You can’t just focus on what’s happened but what risks are coming in the future.”

Bell’s vision is to build a global practice that not only understands the extraterritorial laws imposed by the U.S., but also the local laws worldwide. He seeks team members from varied backgrounds including legal practice, law enforcement, and in-house experience. He is well on his way toward that vision, having hired six professionals in the United States, three in Asia, and is currently recruiting leadership for EMEA.

As he builds out the global team, Bell will also rely on expertise in many other FTI practices to solve clients’ problems in a practical way. Regarding the firm’s strengths, he says, “FTI literally has conducted highly complex and sensitive investigations and forensic services in some of the most challenging locations in the world.”

Having spent significant time in Asia, Bell sees that market as a strategic growth area, noting, “Many Asian companies are awakening to the risks related to non-compliance with export controls and sanctions, and governments in the region are implementing these laws at a rapid pace.”

He also notes, “Western companies are concerned about supply chain integrity and resilience and we are well positioned to assist on either side of that coin at FTI.”

For a kid from Oklahoma who thought the Caribbean was “seeing the world” to where he is now, Bell notes, “I never dreamed I would have a career that would take me around the world so many times—from Arctic Norway in search of the Northern Lights, to cage-diving with great white sharks in South Africa, seeing the sun rise over the Taj Mahal, multiple treks along the Great Wall in China, seeing the Blue Mountains of Australia, and so many amazing places in between. It has been an adventure.” 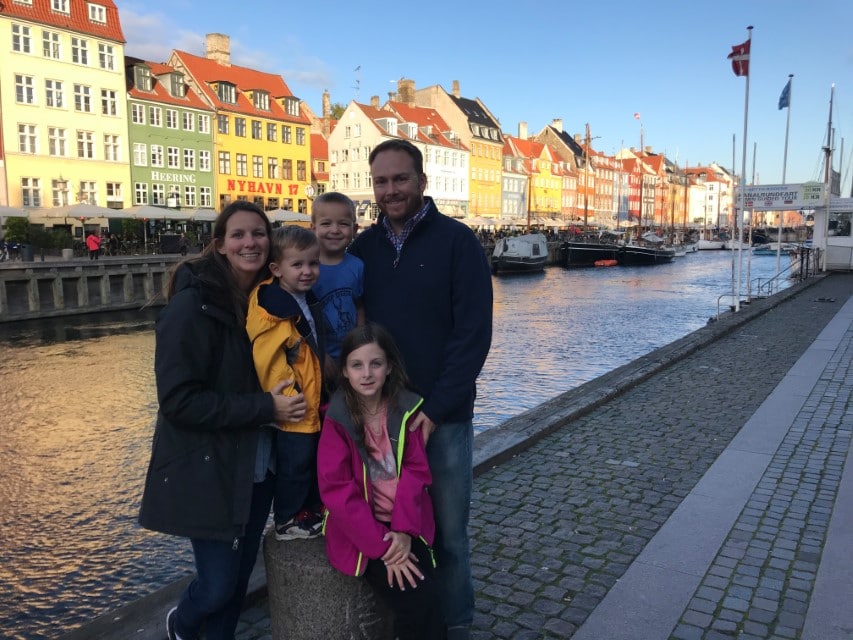 Just prior to FTI, Bell welcomed some long-overdue downtime with his wife and three kids, coaching T-ball, making school lunches, watching college football, cheering for their Houston Astros, and yes—using those 2 million plus United miles to travel with his family.

Now that he is back in the game, Bell is excited to build FTI Consulting’s Export Controls and Sanctions Practice into an industry-leading global practice. 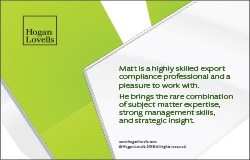 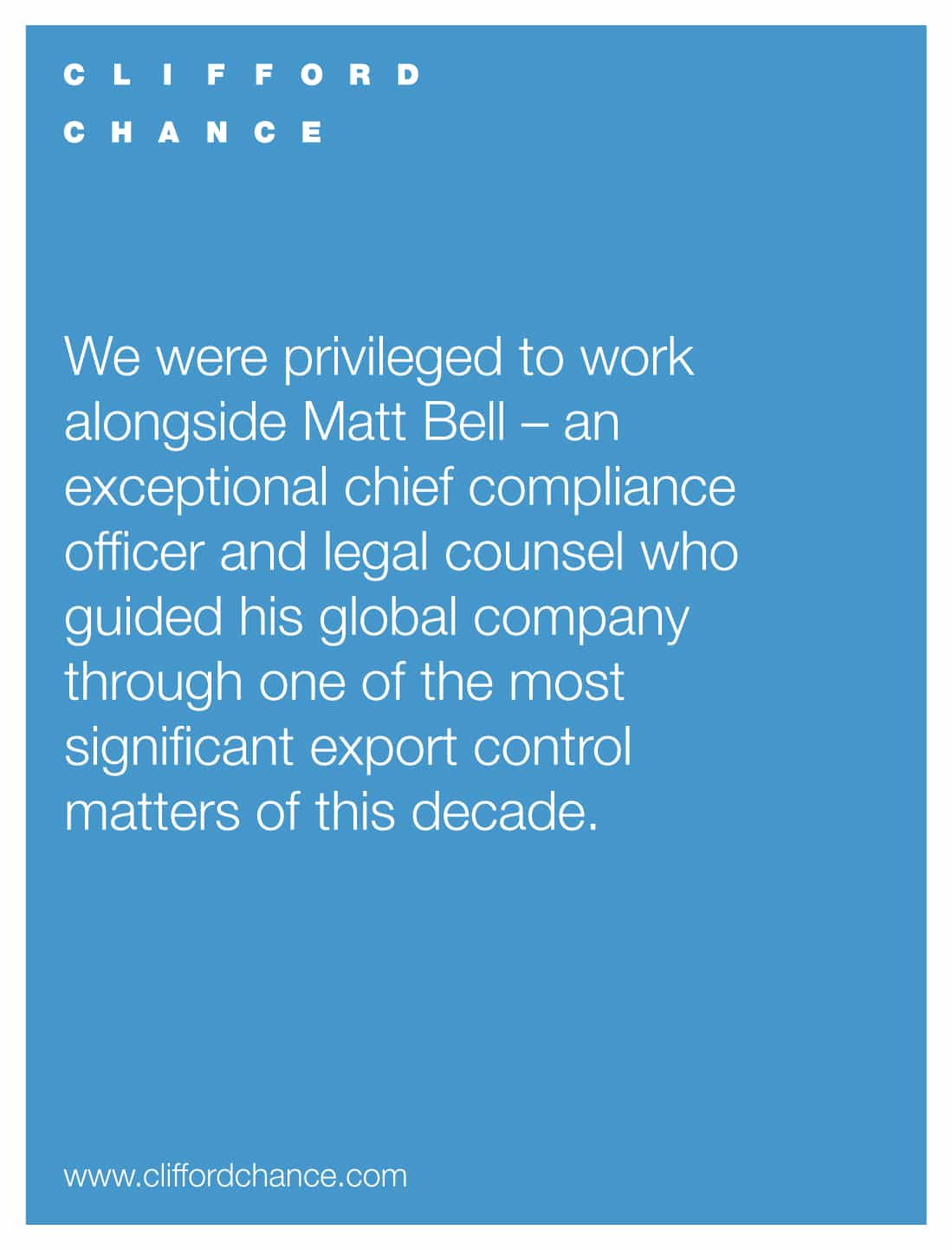 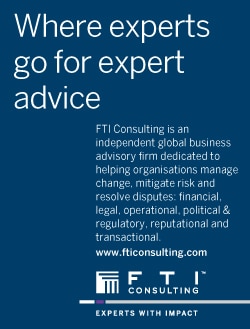