A calming voice on campus

It’s called the Okanagan Charter, a pact introduced in 2015 at the International Conference on Health Promoting Universities and Colleges. And this past October, the small and private Ursinus College became the first liberal arts institution of higher learning to sign on.

This simply reaffirmed the college’s existing commitment, says Robert C. Clothier, the college’s vice president and general counsel. Ursinus, he explains, had already created its own health and wellness division in 2021 incorporating many of the same principles in the charter.

Mindful of COVID-19’s effects on the mental well-being of so many of its 1,500 students, Clothier and the campus community have made the charter a pillar of the college’s new strategic plan. Every Student’s Success, the plan is called, and it unites sports and clinical services as well as overall mental and physical health promotion. 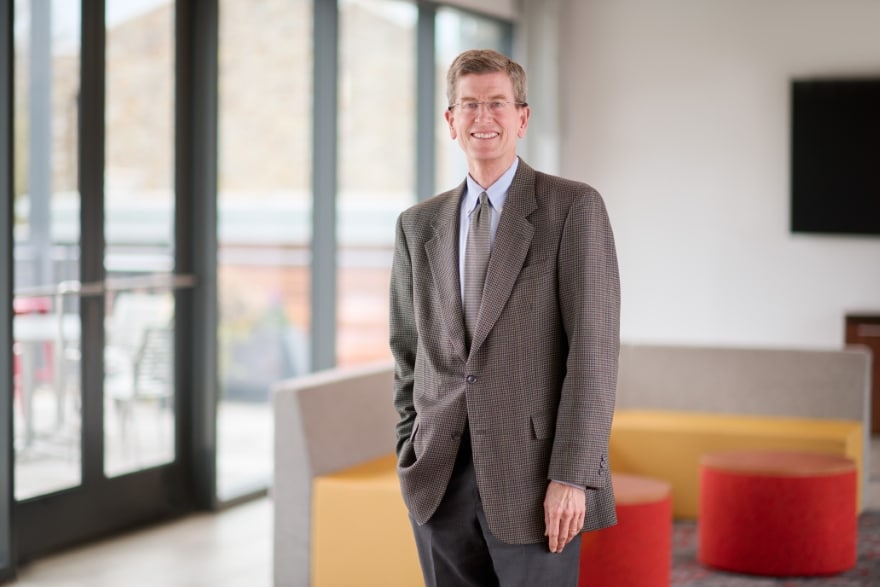 “Everybody’s still feeling so much anxiety,” Clothier tells Vanguard from the campus in Collegeville, Pennsylvania. “The pandemic put a spotlight on a lot of conditions—isolation, depression, burnout, anxiety—and though the worst might be over, we still have to be mindful of everyone’s mental and physical health.”

Students and staff continue to have access to counseling services, but the college is thinking differently about how to expand those services—and to recognize the evolving health needs of college employees, too. Should anyone need acute therapy, Clothier says they’ll get referrals. At the very least, everyone can take comfort that their initial needs will be met.

“With such a progressive approach, and the Okanagan affiliation, we’d like to set a national standard,” he says.

And not just on the health front.

Since becoming Ursinus’ only in-house lawyer in 2015, Clothier has sought to preempt issues. His input was instrumental in the college broadening its whistleblower policy, for instance, with Ursinus now welcoming and investigating complaints on financial as well as personnel issues.

Though this is a private college, it does accept federal funding and thus must abide by Title IX and its gender discrimination clauses that have been made more stringent by the Biden White House. Clothier having helped strengthen the school’s DEI policies—diversity, equity, inclusion—he says Title IX compliance hasn’t been insurmountable.

And any time the term “compliance” arises, Clothier must think about cybersecurity.

“We get our share of phishing attacks, and while we’ve addressed those risks, we also have to think about our vendors,” he says. “We can’t have their systems breached. Everyone here makes a high priority of data security.”

It’s all part of Clothier’s emphasis on risk management. He’s well prepared to do so, his Ursinus role of the past seven years being a logical progression to Clothier devoting much of his career to serving higher education in some manner.

He didn’t necessarily intend for such, the Princeton University undergrad and University of Chicago Law School alumnus initially interested in media law. Media law including First Amendment law, during his early years with firms, Clothier was retained by public universities to advise on campus free speech and expression. 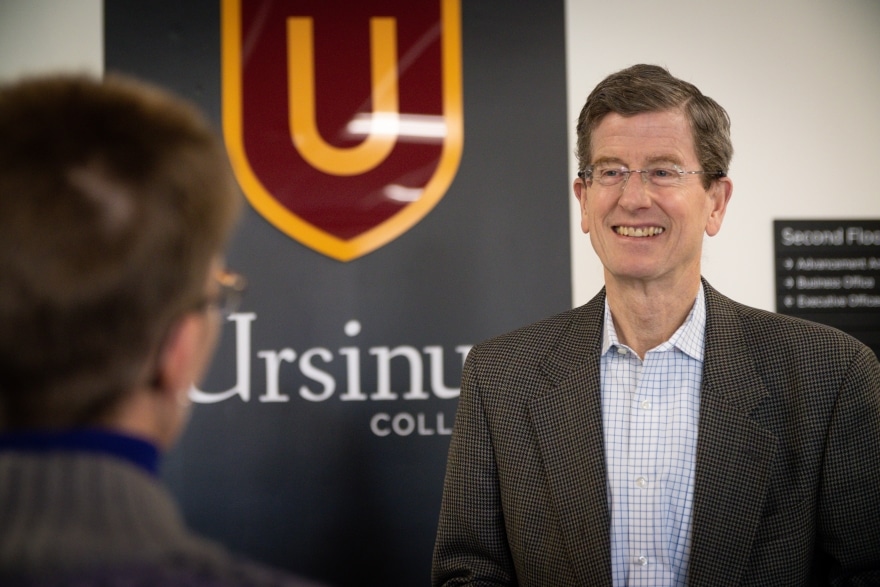 All told, Clothier logged around 25 years at firms, the last 20 months on the higher education practice group at the Philadelphia office of Saul Ewing. While Clothier had no connection with Ursinus when the college was looking for its first general counsel, they hit it off.

“It never was a tough sell getting me here,” he says. “I liked Saul Ewing a lot, but this seemed what I’d enjoy even more. I also wanted to go in-house.”

Seven years later, Ursinus still feels like home and Clothier finds something refreshing about being around so many smart young people. And everyone seems intent on fostering a better community, one that strengthens the town-gown relationship.

“We’ve got young faculty members raising families and wanting to sustain their career growth and we’re going to assist them in ways that go beyond what’s typical,” he says as another academic year proceeds in this scenic borough 30 miles northwest of Philadelphia. “We want to be as good a place as there is to work.”

Clothier aids the cause by sometimes stepping outside his everyday legal responsibilities. As an example, he recently helped expand parental leave so both men and women can access paid time off following the birth or adoption of a child. Before this change, only women enjoyed that privilege.

“We’re trying to be as inclusive as possible,” he says. “We don’t just want to do the minimum of what the law might require. There might be an added cost, but we see it as an investment.”

Asked for other examples, Clothier cites the remote work policy that grew from COVID-19 protocols. It kept students and instructors engaged during the pandemic and helps in recruiting or retaining employees who no longer must live in the area.

A voice to be heard

While he’s not always spearheading these initiatives, Clothier does his part to nurture positive relations with Mayor Aidsand F. Wright-Riggins and borough councilors in promoting Main Street as a community destination. Clothier envisions deals for coffee shops, cafes and music venues to lease college property downtown.

He might have special interest in the music venues. Clothier gifted with a deep bass voice, he sings the lower verses for an a cappella group called The Tonics. He’s got at least a little more time for singing these days, Clothier and his wife being empty-nesters, as their two college-grad children are on their own.

Similarities do abound between singing in a group and being a legal boss, Clothier musses. Got to be tuned to whatever’s the task at hand. Harmony doesn’t just apply to song. 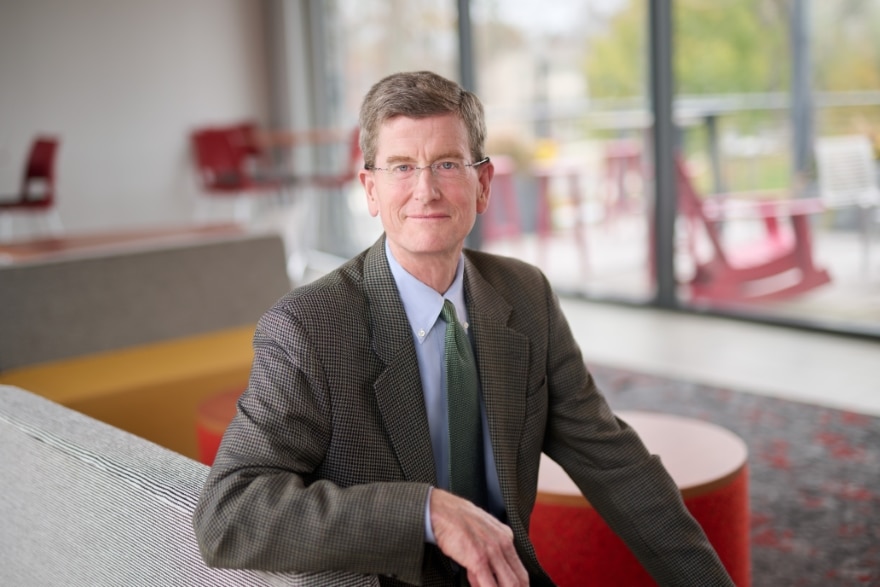 Meanwhile the daily tasks only get more exciting, Clothier noting there’s a new president, Robin E. Hannigan, whose previous position was provost at Clarkson University. She’s a go-getter with great ambition for the college, Clothier says. Even more reason to make Ursinus his first and forever in-house role.

“I’m not looking to go anywhere else in terms of my career,” Clothier says. “I love this job and the people. It’s a very good culture.” 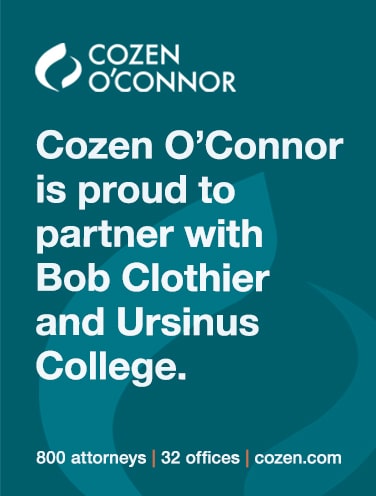 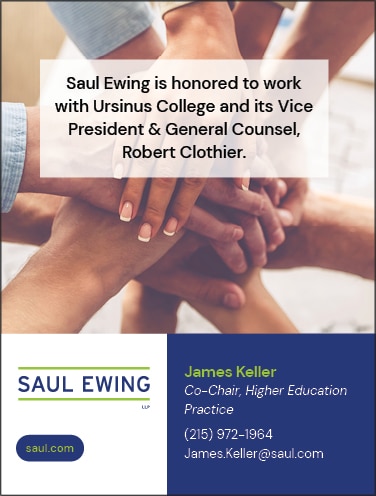 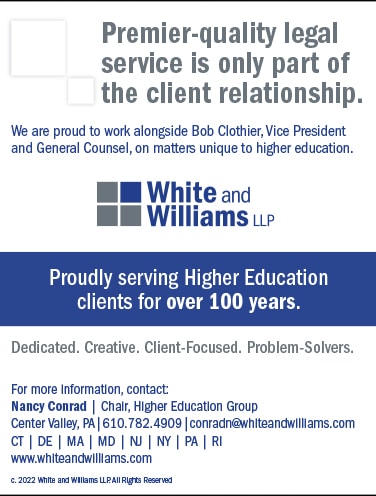