There are times when Bill Caruso might sigh at the regulations a private, for-profit college must adhere to. Case in point: No more than 90 percent of its revenue can come from federal financial aid.

DeVry University, where Caruso serves as chief legal officer, has little in common with, for example, the Berklee College of Music in Boston or Los Angeles Film School. 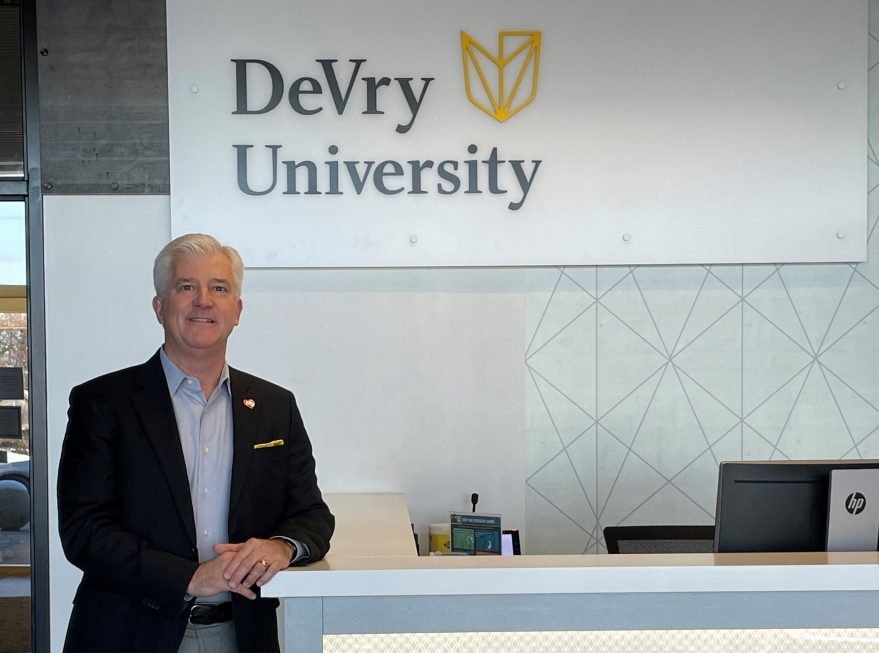 “We serve students who haven’t been well-served by traditional education,” Caruso tells Vanguard in October as another academic session proceeds at the suburban Chicago main campus and locations nationwide as well as online. “Seventy-five percent of our students have tried college before, and it didn’t work for them. We have the support infrastructure to help these students stay on track.”

And it’s a diverse student body of 27,000-plus that includes single parents, working adults of all ages, minorities and veterans. So many of these students coming from, to say the least, challenging economic situations, federal financial aid is their only means of acquiring the skills for a productive livelihood.

But rules are rules, and Caruso ensures DeVry complies while going the extra mile in other areas to better the odds of alumni success.

Come mid-2024, the U.S. Department of Education is expected to enforce its so-called gainful employment rule that the Trump administration had put on hold.

In a nutshell, the gainful employment rule is designed to ensure that programs at colleges and universities for which students can use federal aid provide their students with the skills necessary to be employable and get out of debt. Programs that fail to meet these standards could risk losing access to student aid.

While Caruso says this may be a well-intentioned rule, he finds it too narrowly tailored to the for-profit sector. He’s quick to add that DeVry’s programs should meet the new standards. The modern economy has three demands where the supply of young talent falls short, and all three are in DeVry’s wheelhouse: healthcare administration; technology with emphasis on cybersecurity; and business. 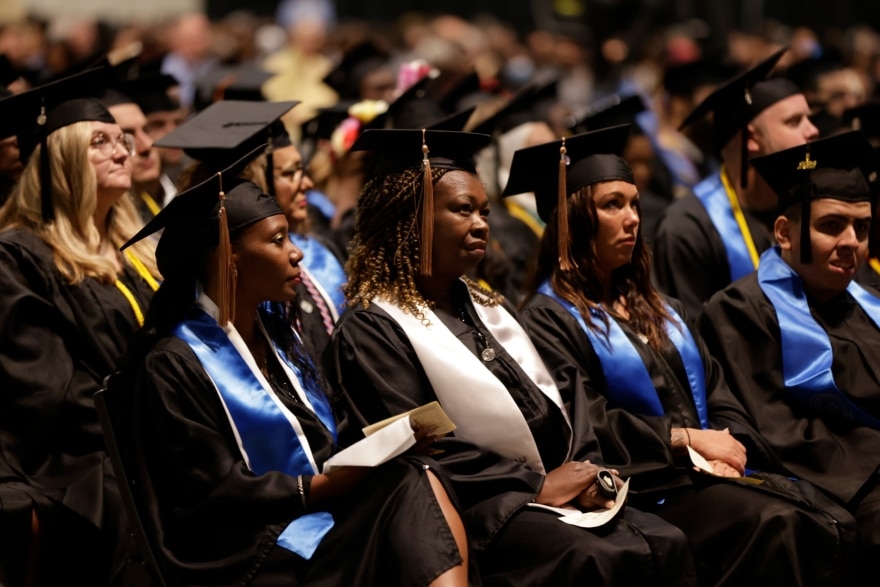 All these subjects are taught with the same mindset that goes into a traditional university degree, but with extra, even personalized, attention to the individual student and metrics that assess the effectiveness of curricula.

Generally speaking, Caruso says there are a few reasons why DeVry’s students didn’t succeed at other schools. Often-times their preparation in critical subjects, especially math and English, was substandard. Some just weren’t ready for what can be an overwhelming college experience. Others were dealing with family, personal or job-related hurdles.

“Our challenge is to do two things,” he says. “We’ve got to close the societal opportunity gap by providing the best possible return on their [students] investment of time and money. Layered on that is a focus on our graduates denting the diversity gap.”

Particularly so in tech careers, which might be the area of expertise most in demand. Caruso describes as abysmal the low percentage of women and minorities in IT. DeVry offering everything from an entry certificate in the subject to a graduate degree in IT management and cybersecurity, he says the school is poised to make a difference.

DeVry’s private, for-profit status notwithstanding, Caruso says his legal department tends to many of the same matters as most any institution of higher learning. Aside from financial aid audits, there’s Title IX compliance, governance, vendor contracting, personnel policies and adhering to the data privacy laws of all the jurisdictions where students are virtually enrolled.

“We’re not much different from a private nonprofit with an independent board of trustees,” Caruso says. “Even a nonprofit school has for-profit vendors. But we still have that unique set of regulations that only applies to our sector, which is such a small part of the educational landscape. In my view, the tax status of an organization should have nothing to do with how it’s viewed.” 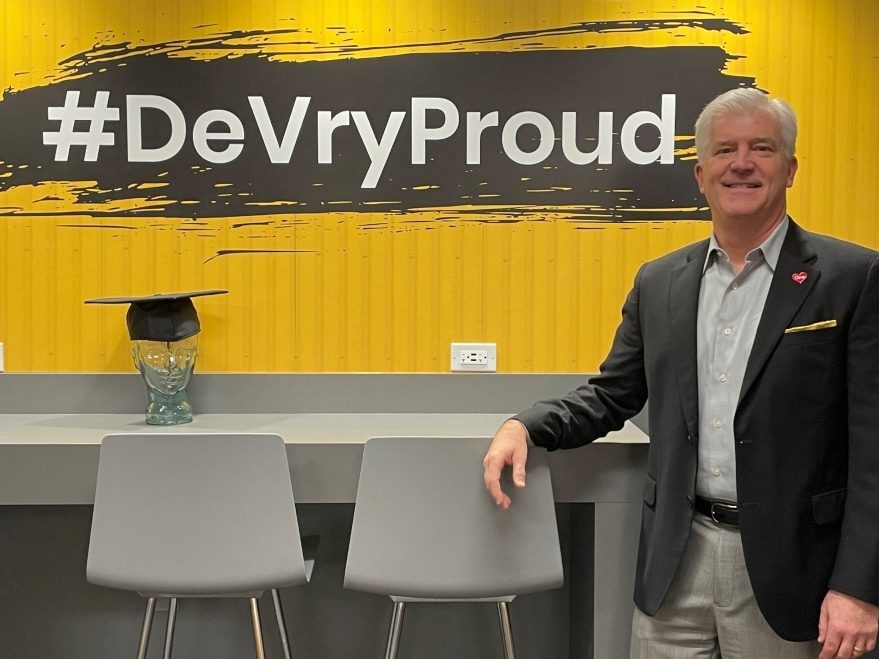 Minding those details as well as advising on strategic matters are all part of being DeVry’s legal boss, and Caruso is glad to again give it full attention. In January 2020—the start of a tumultuous year—he was handed a battlefield promotion of sorts, the interim presidency while the board searched for a successor who turned out to be Tom Monahan.

Caruso did more than keep the seat warm until August, with pandemic policies among his concerns. He’s proud to say DeVry never skipped a beat as the staff was well prepared for virtual work due to Chicago’s brutal winters.

“We were incredibly successful during COVID because we kept at center of our thought: How do we help our students?” Caruso says.

The demand for online education, which already had been strong, has only since intensified. While DeVry is pricier than most community colleges, Caruso says there’s much value in its extensive student services and support, with proof found in an 86 percent student retention rate since late 2020.

And Caruso feels he’s carrying on a family tradition by focusing his legal life on public service and education.

He speaks affectionately of his maternal grandmother who graduated Northwestern University School of Law in 1919 and during the Great Depression and directed Chicago’s Legal Aid Bureau, which assisted immigrants in finding housing and employment. Meanwhile his maternal grandfather and uncle had their own firm and advocated against segregation.

Inspired by Martin Luther King Jr., Caruso’s father was first general counsel of the Leadership Council for Metropolitan Open Communities and argued fair-housing cases before the Supreme Court. Caruso’s mother also is a lawyer, as are his siblings.

Yet there was a time when the younger Caruso thought his calling lay elsewhere. Math and science had early appeal, but a course in organic chemistry caused him to mull other careers. Upon graduating from the University of Wisconsin-Madison with a poli-sci degree in 1987, he too enrolled at Northwestern University Pritzker School of Law. 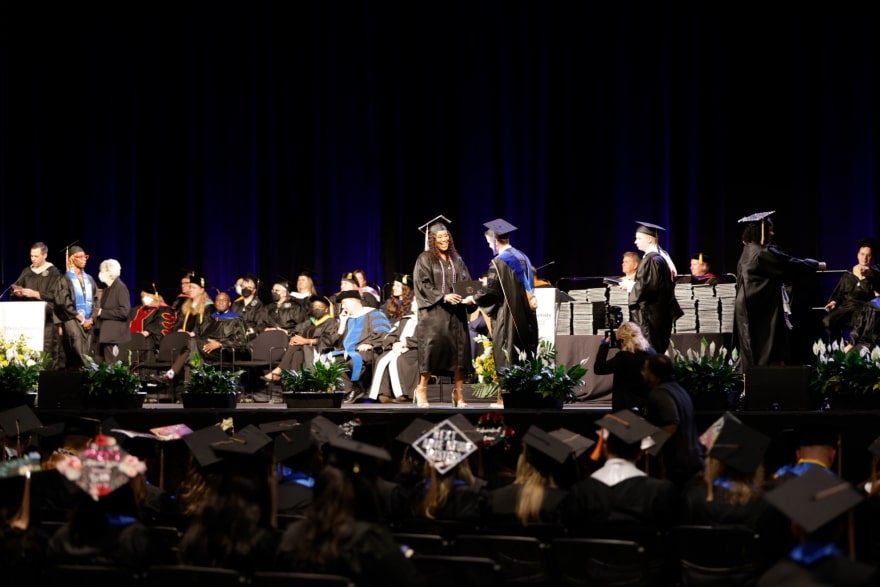 After honing his skills from 1990 to 1993 at Jones Day in Chicago, Caruso took his first in-house job at Caremark International Inc. He moved to AT&T from 1997 to 2006, CommScope for the next three years and to what then was called the DeVry Education Group in 2009.

DeVry Education Group changed its name to Adtalem Global Education in 2017, and when the rebranded entity divested DeVry University to Cogswell Education one year later, Caruso went along as general counsel and secretary and vice president of regulatory affairs.

This past September he celebrated his first anniversary as chief legal officer. Even with a team of over 75, Caruso says he’s sure to keep busy. For-profit education and for-profit healthcare both are subject to bias, and Caruso says he’s got much educating to do in the classroom of public opinion.

“Our education is the great equalizer,” says the married father of two grown children. “I’m very satisfied with our performance.” 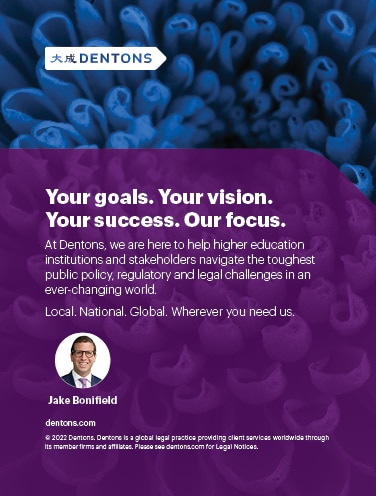 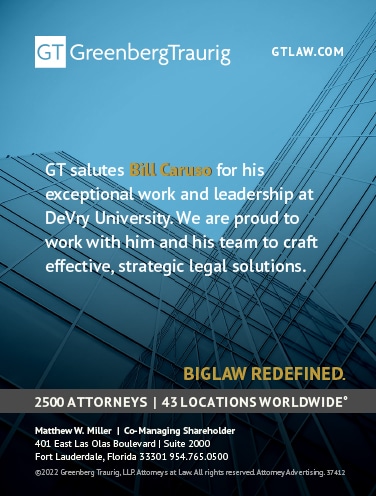 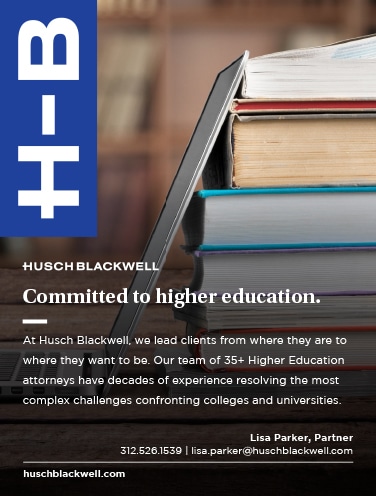 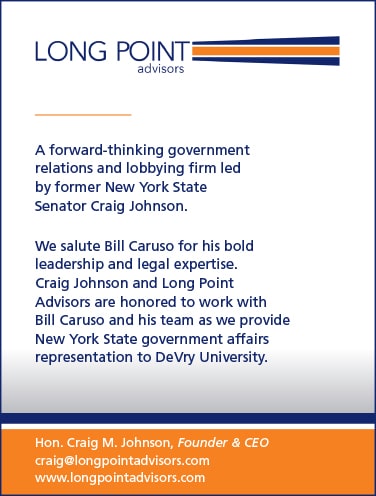 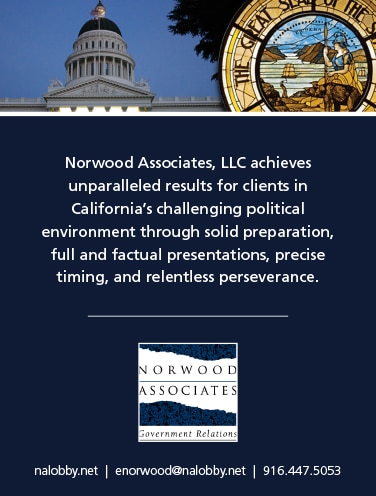