The GSD approach to legal

Todd Hanna is as good a salesman as he is a lawyer, and he’s a damn good lawyer.

When his company, Sovos Compliance, came to a roadblock while negotiating with a new customer, a large shoe company, Hanna went online and ordered a pair of their shoes. “After I made my pitch for them to agree to our proposal on the liability issue, I ended by mentioning that, as a token of good faith and a demonstration of how much we want to work with them, I had just bought a pair of shoes that day,” he says.

Everyone laughed, and when Hanna forwarded his order confirmation email to the company’s general counsel, he responded to the email saying that the company accepted Hanna’s proposal. 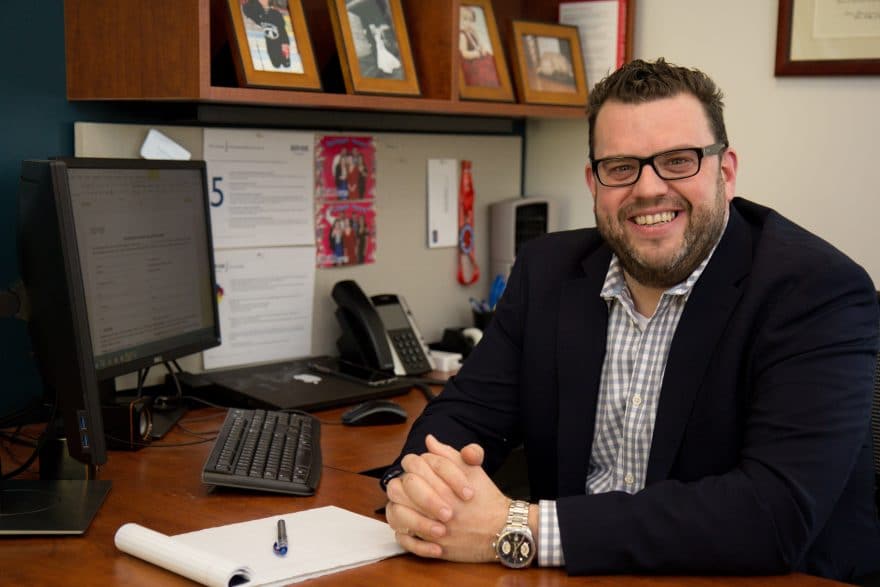 Hanna’s ability to lighten the mood and build congenial relationships with customers—tactics familiar to salespeople but not as common with attorneys—is part of the “particular philosophy” he has about his job as vice president and general counsel for Sovos Compliance.

Hanna advocates for legal departments that are embedded in the business. And contrary to popular belief, he holds that when attorneys work with the sales team, they can make deals easier for both customers and internal sales staff. Hanna’s motto “GSD”—short for “get shit done”—reflects that, and since Hanna joined Sovos Compliance, he’s been breaking down the walls between the legal and sales teams.

“The GSD mantra is an identity and a brand, one that gives legal a little swagger and also one that totally resonates with sales.” – Hanna

“The GSD mantra is an identity and a brand, one that gives legal a little swagger and also one that totally resonates with sales,” Hanna says.

Headquartered in the Boston area, Sovos provides tax, compliance and business-to-government reporting software to companies around the globe. That software automates burdensome reporting processes and is, like the GSD mantra, all about making life easier for end users.

“If you [ask] any of the sales leaders on my team, they would reinforce the idea that it’s been night and day since Todd came in,” says Chief Sales Officer Joe Healey. That’s especially impressive considering that Hanna joined the company in September 2016.

While Hanna certainly has his work cut out—Sovos Compliance is experiencing significant revenue growth, has spread to three continents and acquired five companies in three years—his tone is cool and collected.

When he accepted the job, he asked Healey to involve him in some of his “meatiest deals,” so Hanna could roll his sleeves up and prove himself. “He did get involved in a couple negotiations that were pretty nasty,” Healey says. “He’s good on client calls. He’s an excellent sales guy, who happens to be strong from a legal perspective.”

Hanna makes a point to have his lawyers get introduced to and involved with prospective customers early on in the sales process. “I want us to establish a friendly, partnering environment for the customer to feel comfortable going forward with us,” Hanna says. That way, when it comes time to negotiate the terms and conditions, engaging legal is not seen as a dreaded necessary evil.

Hanna also wants his lawyers to do their homework before speaking with customers. He encourages them to learn about each customer, each business, each product and what problems Sovos Compliance can solve for its customers.

He tries to foster a similar sense of trust with the sales team. He treats their objectives as if they’re his own, as if their outcomes have a direct impact on his livelihood. He recognizes that it’s a high-pressure sales environment, and he shares that sense of urgency.

Healey says Hanna is a strong leader, and the fact that the legal team Hanna inherited—five attorneys and two legal assistants—has remained intact speaks to that.

As soon as he arrived, Hanna asked that his team get to participate in the same trainings that the sales team receives. He wanted his team to learn about the company’s products, services and value proposition in order to understand how to qualify a deal and the cadence of deals.

“That kind of sales training is never given to attorneys,” Hanna says. “It’s not something that’s considered consistent with our job; but if you think about what commercial attorneys are doing, they’re taking a deal which has been prequalified and maybe there’s been somewhat of a verbal [agreement] around pricing, but we’re far from done. We now have to negotiate a whole contract.”

Hanna also had his team members take communications training, often reserved for managers, so each one understood his or her communication style and personality, as well as how they might be perceived by others.

“Todd brings a lot of energy and creativity to our department and helps change what can be a sometimes tedious and hostile negotiation process into a friendlier and more resolution-oriented meeting of the minds.” – Jillian Michaud-King, Sovos’ associate counsel

To earn the sales team’s trust, Hanna assigned attorneys to each sales division and brought attorneys into sales and forecasting meetings. “You need to feel engaged and not in a vacuum,” he says. “It brings more context and helps us feel the success when we win deals and disappointment when we lose a deal. It sets a tone that we run a functional group aligned with the other groups.”

“Todd brings a lot of energy and creativity to our department and helps change what can be a sometimes tedious and hostile negotiation process into a friendlier and more resolution-oriented meeting of the minds,” says Jillian Michaud-King, Sovos’ associate counsel.

Hanna’s emphasis on the sales cycle does take most of his time, so he’s grateful for outside advisors who help free him up to GSD. He often turns to White & Case LLP for outside legal counsel, Marsh for insurance questions and Colliers International for real estate assistance. “I can’t tell you how comforting it is to have external partners you totally trust, so you can pass off certain work to them and focus on other things,” Hanna says.

In addition to his general counsel duties and emphasis on supporting sales, Hanna oversees facilities management and the company’s real estate portfolio.

“It’s a bit nontraditional for a GC, for an attorney for that matter, but for me, managing the real estate portfolio, managing the insurance portfolio is a big interest,” he says. “I think it represents real opportunities for us to mitigate costs and, at the same time, from a contractual perspective, to make sure we have contracts that are right, that our customers appreciate, [that] we have insurance appropriate to what we do.”

Managing the real estate portfolio also gives Hanna’s legal assistants a break from the monotony of reviewing and assessing hundreds of orders. “If in the end, I improve their resume so much that they get a much bigger, better job than I would ever have for them, as sad as I would be, I’d take solace in the fact that I helped make that opportunity available.”

In return, the legal department has embraced Hanna’s efforts to bridge the sales and legal teams and adopted his friendly, sales-savvy approach. “To be able to see the lawyers on my team do that is tremendously impactful and rewarding to me” Hanna says. “To see sales people that fall madly in love with the support that they’re getting from the legal department … that’s why I like to get up in the morning and go to work. That’s what makes it so much fun.”