When companies give their employees flexibility, they get loyalty and productivity in return

On her birthday, Allison Nagelberg asked every employee at Monmouth Real Estate Investment Corporation to name a charity they wanted to support. Then she donated $100 to each charity.

She got the idea from her dad, who was an executive at Prudential Insurance Company for nearly his entire career. On his 60th birthday, he asked all employees to put the name of a favorite charity in a big wheel. He randomly selected 60 charities, to go with his 60th birthday, and donated $100 to each. Nagelberg loved that idea, but she didn’t want to wait until she was 60 to start the tradition.

“I think it’s important to cultivate that spirit throughout the organization that we believe in donating and in doing,” says Nagelberg, general counsel to Monmouth Real Estate Investment Corporation, a publicly traded industrial REIT (Real Estate Investment Trust) whose tenants include FedEx, Coca-Cola, Best Buy, Anheuser-Busch, General Electric Company and other well-known names. 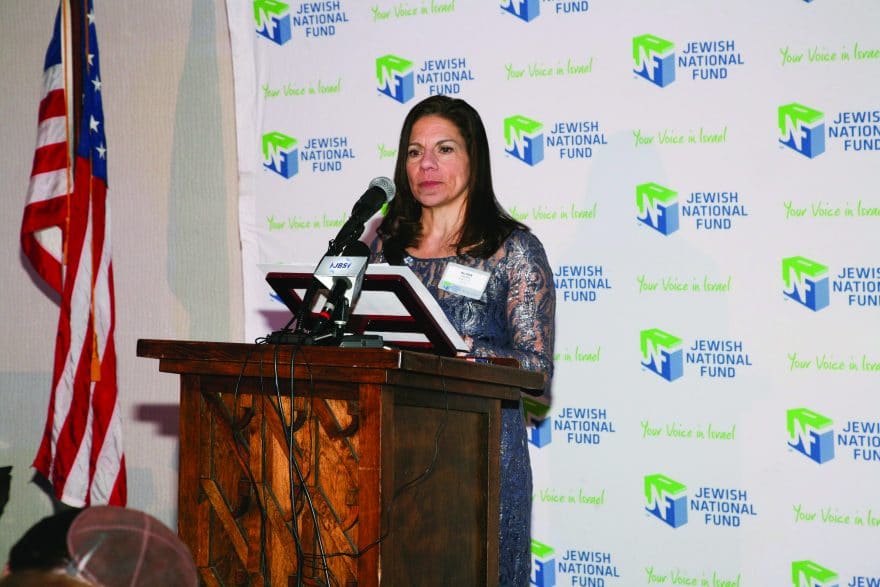 Stepping back and giving back

Nagelberg always knew she was destined for a law career and that philanthropy would be essential to her no matter what. What she didn’t know was that she would want to take time off to raise a family, or that during that time, she would dive deeper into the world of charitable work.
After attending Tufts University and the London School of Economics and earning her law degree at New York University School of Law, she had her first child and decided to leave the legal world.

“For me it was the right decision to stop working at that time,” she says. “Some people work right through, and I applaud those who do. There’s no one right way to do it.”

She calls herself the stay-at-home mom who was never home because she threw herself into nonprofit work, and she brought her kids along for the ride.

“I loved that they were learning philanthropy from birth,” she says. “They got to understand that giving back to the community is expected. It’s just something you do.”

Those lessons stuck. Nagelberg’s oldest son is supportive of veterans’ charities and the Jewish organization Chabad-Lubavitch. Her middle son is in Israel, about to start rabbinical school, and her youngest daughter, an advocate for Israel, has traveled the world—from Kenya to Bolivia, Laos and Thailand—in pursuit of opportunities to help children with the use of service animals.

Nagelberg’s own charitable work is just as impressive. She is co-president of her local synagogue’s board of directors. She lobbies members of Congress as a member of the New Jersey Council of the American Israel Public Affairs Committee. She is on the Jewish National Fund’s central New Jersey board and chairs Ramah Nyack Jewish day camp’s strategic planning committee. She’s also a director of Special Strides, Inc., a therapeutic horseback riding center for children with special needs, and runs marathons to raise money for the Weizmann Institute of Science. She has previously served on several other non-profit boards, as well.

In 2012, she earned an executive MBA in finance from Rutgers University, which enables her to bring both legal and financial skills to her charitable work. Each year she raises hundreds of thousands of dollars across the organizations she supports, and she believes it’s just as important to contribute financially herself.

When Nagelberg’s youngest child started school, she decided it was time to go back to work.

A friend put her in touch with Monmouth and its sister company, UMH Properties Inc. The two companies hired her as general counsel and allowed her to work 10 hours per week to start, which was unheard of flexibility for an attorney.

“Very few attorneys think that they can have a meaningful career at 10 hours a week,” she says. But she loved it because it gave her the flexibility to do all the things she’d been doing as a stay-at-home mom and continue her nonprofit work.

“I think it’s an important message for companies that when they’re flexible with their employees they get a lot of loyalty in return,” she says.

Sixteen years later, Nagelberg is still at Monmouth, but the company and the field are completely different. Nagelberg’s hours have increased to more than full-time, but she’s quick to say she’s not complaining. She loves her job.

Monmouth’s core business is still owning net-leased industrial properties on long-term leases to investment grade tenants: acquiring the properties, being a great landlord and having excellent relationships with tenants, builders and bankers. Both Monmouth and UMH Properties remain among the oldest and most successful publicly traded companies. Today, though, cyber security, compliance and corporate governance issues have taken a much bigger focus.

Today Monmouth owns 100 industrial properties and 16.3 million rentable square feet. Most properties are on the eastern half of the U.S., but it recently acquired a property in Seattle, Washington, and it has several properties in the Southwest.

The company has benefited from e-commerce, as FedEx is one of its largest tenants, and it is well-positioned to take advantage of the Panama Canal expansion, which will allow larger ships to pass from the Pacific to the Atlantic.

“We’re over a billion dollars in equity market cap, and we’ve reached so many important milestones,” Nagelberg says. “I like to think that I have some responsibility for that success.”

A few years ago, Nagelberg decided to focus exclusively on Monmouth, so the companies decided to hire a separate general counsel for UMH Properties.

A year-and-a-half ago, Nagelberg hired one attorney to join her in-house. The two-person legal team was named Best Legal Department in New Jersey by the New Jersey Law Journal in 2015 for keeping its legal budget stable, even as the company grew by more than 15 percent.

“We have an exceptional team of people, and we are all moving in the same direction and excited about the company’s growth and working together,” Nagelberg says. “It’s a nice feeling to come into work every day, and it’s an honor to look back over 16 years and see how much we’ve accomplished.”