Credit due for aiding the financially underserved

Consumers beware: COVID-19 has unleashed scam artists preying upon the most economically vulnerable. A couple of federal stimulus checks notwithstanding, many people of modest means remain hard-pressed to scrape together their next rent, car payment, credit card bill or whatever. 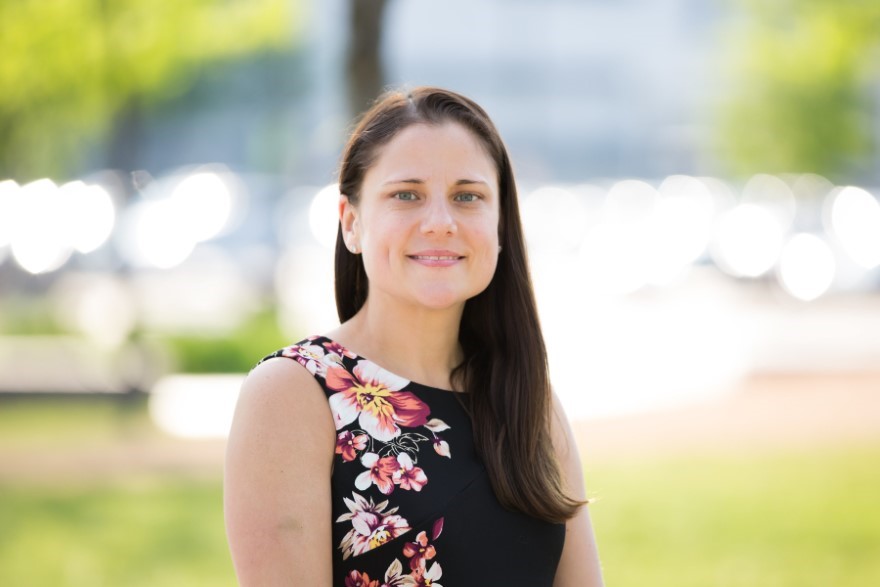 It’s all the more reason why Andrea Andre is so committed to uphold trust in Axcess Financial, whose clientele largely consists of the so-called credit invisible who’d be turned down for short-term installment loans at banks and credit unions.

For them, the pandemic has been the second half of a double whammy, Andre says, aggravating what had already been a situation of financial distress.

“There’s no question that COVID’s effects have been worse on the poor and subprime,” she tells Vanguard in early December when many of Axcess’ clients needed short-term loans just to provide a happy holiday for their families. “We’ve seen a demand for our services since March 2019. A lot of people don’t have $500 saved up for an emergency expense, and the pandemic has only made it harder with so many of them out of work or working reduced hours.”

With Andre’s help in her roles as compliance officer, general counsel and corporate secretary, Axcess has tried to ease such plight, the company’s short-term loans ranging from six to 24 months, and payday loans available in 12 of the 30 states in which it operates.

Based in Cincinnati, Axcess prides itself on a simplified loan process that began pre-pandemic with Andre’s assistance.

She joined the legal team as a corporate counsel in 2016 and was promoted to her present positions three years later. Along with her handpicked department of seven, she’s driven the firm’s user-friendly efforts that include the online account management tool POCKET 360. This provides customers with details on past loans and payments, what products they may be eligible for, such perks as cash-back rewards from retailers, and primers on financial education. 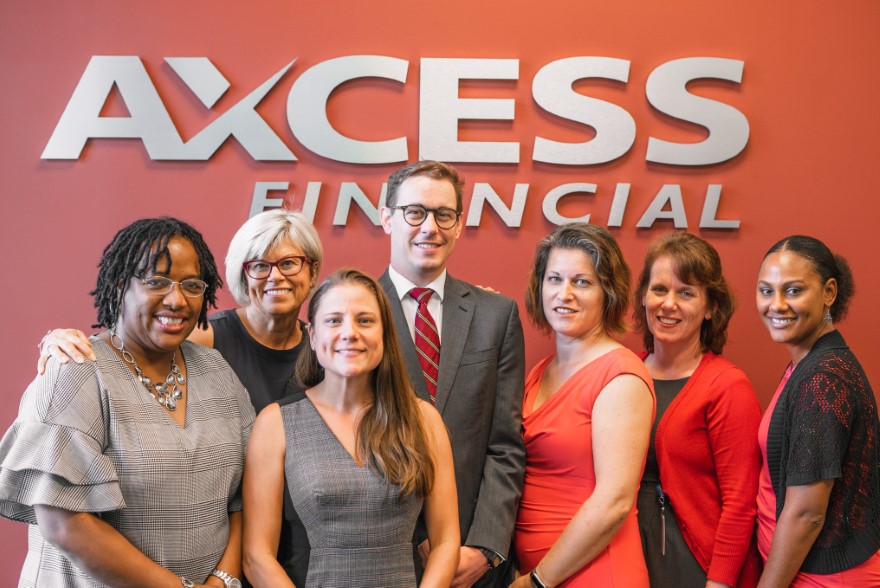 As an added benefit, POCKET 360 enables customers to check their credit scores at no cost through TransUnion, the American agency that collects and aggregates data on almost every credit-active consumer not only in the United States, but worldwide. It’s all the better, Andre says, that POCKET 360 allows them to access such information remotely, what with the need for continued cautions on the COVID-19 front.

Of course, that data must be secure, and she ensures the firm’s compliance with the privacy laws in all states where Axcess maintains operations. How much easier it might be, she muses, if there were a federal standard for data security along the lines of the European Union’s GDPR, but this remains a matter handled on a state-by-state basis. The same applies in other areas—the federal Consumer Financial Protection Bureau largely deferring to state regulation of such matters as loan range amounts, permitted charges, notifications and record-keeping.

“Though the laws can be similar, details vary with each state having its own little nuance,” Andre explains. “That includes how you’re examined.” 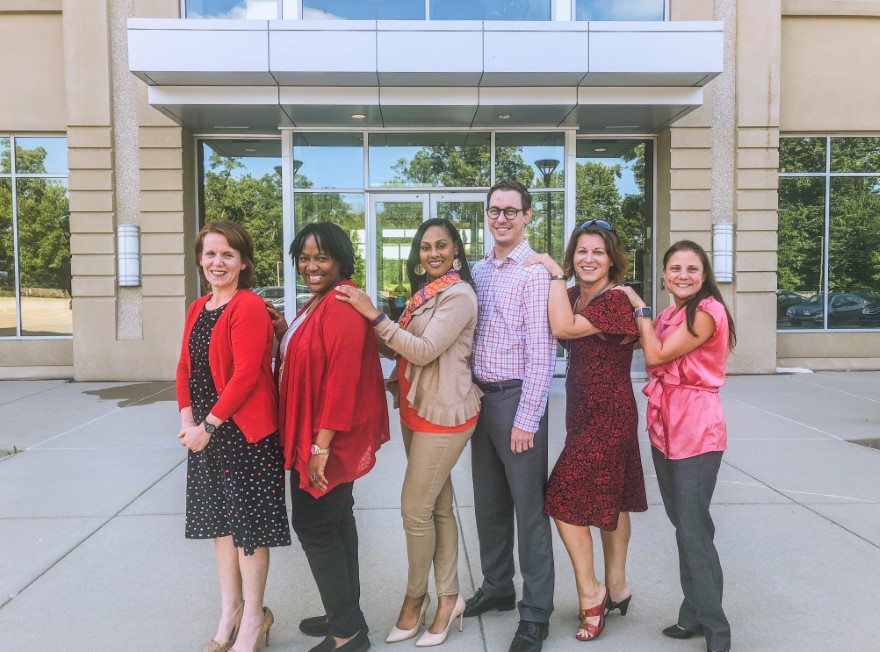 While most states notify in advance of a pending exam, Missouri and South Carolina can keep everyone on their toes with random, in-person checks. In both states, Axcess maintains an email inbox in order to alert Andre that an examiner is on premises and what documentation needs to be provided.

“One thing my team has done a great job on is our compliance management system,” she says. “They’ve updated SOP [standard operating practice] and the training manuals and keep up with the rules in every state.”

For Andre, it’s all part of fulfilling the responsibilities of her three roles, which she is grateful to have earned. 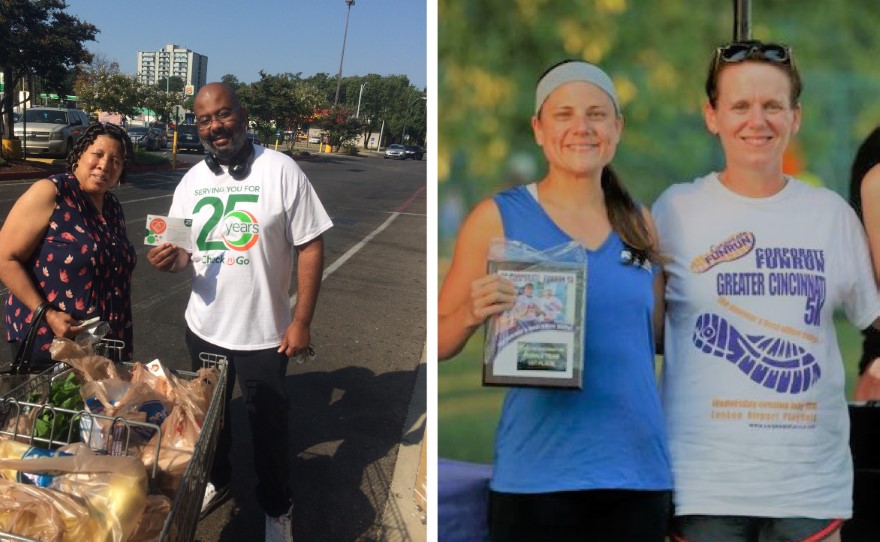 “They’ve accepted me as a business and thought leader, not just looking to me for legal advice and compliance, but welcoming me in strategic business meetings,” she says. “Not many attorneys get such an opportunity to do so much at a business.”

The pandemic has also brought out the best in Axcess Financial, she goes on to say, describing how the bosses sought to ensure the least disruption to customers. Even with the virus necessitating social distancing and other safety protocols, Andre says service didn’t suffer, one reason being that the push for remote operations had already gotten underway.

At times it’s been a little more challenging for her, often working at home with three young children vying for attention, but she’s learned how to manage time and compartmentalize. The Cincy area is a great place to raise a family, she says, there being rural recreational opportunities in and outside Ohio’s largest metropolitan area. 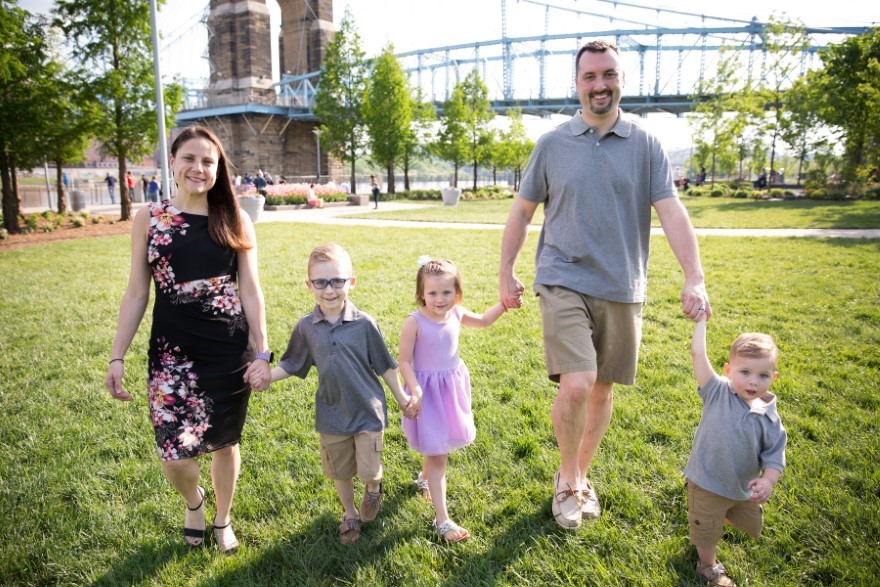 The Buckeye State has been home for a long time, Andre having graduated from the University of Cincinnati in 2002 prior to enrolling at Capital University Law School in Columbus. She cut her teeth as an associate just south of the border, with Pearson & Bernard in Edgewood, Kentucky, from 2005 to 2007, then went in-house with consumer finance company Cash America in Cincinnati until 2012, ascending to director of corporate legal counsel.

Afterward came almost four years as compliance manager of Security National Automotive Acceptance Co. in Mason, and then it was on to to Axcess, which she deems her most fulfilling role.

“Through various roles I really found myself interested in consumer finance and how it impacted our customers,” she recalls. “I saw there were a lot of middle-class people who needed our support. I was able to grow in that position, apply what I learned there and make a difference.” 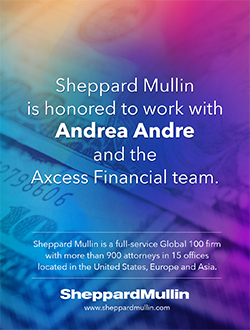 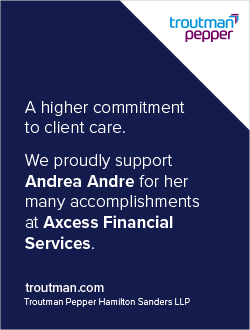