It can be difficult to get a credit card if you have bad credit or no credit at all.

Many banks don’t trust young people or people with low credit and deny them loans or cards. Lead Bank gives customers the benefit of the doubt, though, and works with them to build their credit responsibly, says Julie Pine. 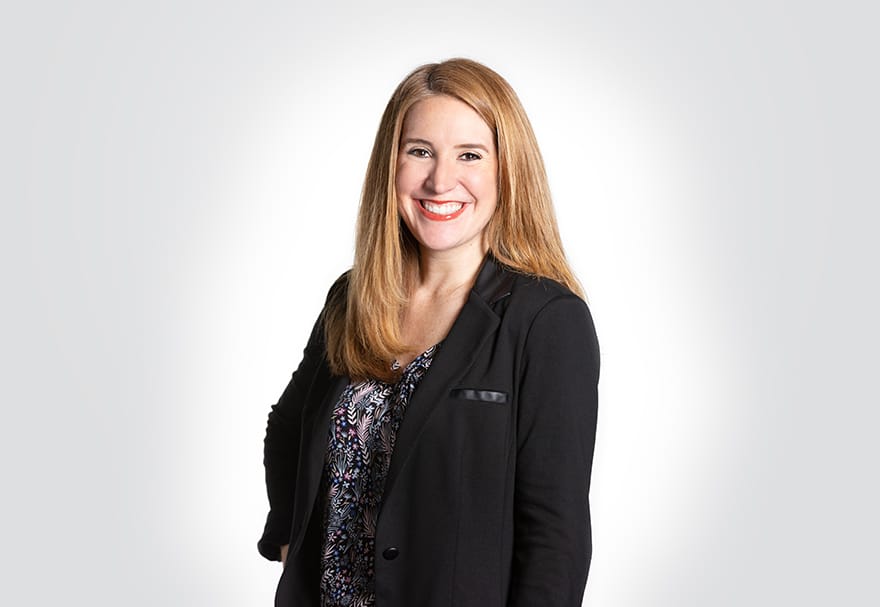 As the bank’s executive vice president, general counsel and chief risk officer, she helps cultivate partnerships with companies that create digital financial tools. She also oversees compliance and enterprise risk to ensure both the bank and its customers are protected.

“We strive to offer products that not all people have traditionally had access to,” she says. “The products and services we offer affect people’s lives and matter to their families and their well-being, so it’s satisfying knowing that the work I do impacts that.”

Building for the future

Lead Bank is a community bank with locations in Kansas City, and Lee’s Summit, Missouri. When Pine was hired in 2017 as its first general counsel, she built the legal, compliance and human resources departments. She also helped develop the bank’s growth strategy.

Part of this growth includes partnering with companies that allow Lead Bank to expand its services and offerings nationwide. Pine started with the bank just as its CEO was having conversations with Self, a financial technology company that helps people build credit. She helped negotiate the contract and finalize the deal.

The partnership, formalized in 2018, allows people to open a credit builder account at Lead Bank and eventually apply for a secured credit card, which works like a debit card in that people can only spend money they already have. As they build their credit, they can then move on to a partially secured card, which is more like a traditional credit card, but still requires having some money deposited to secure the available credit. 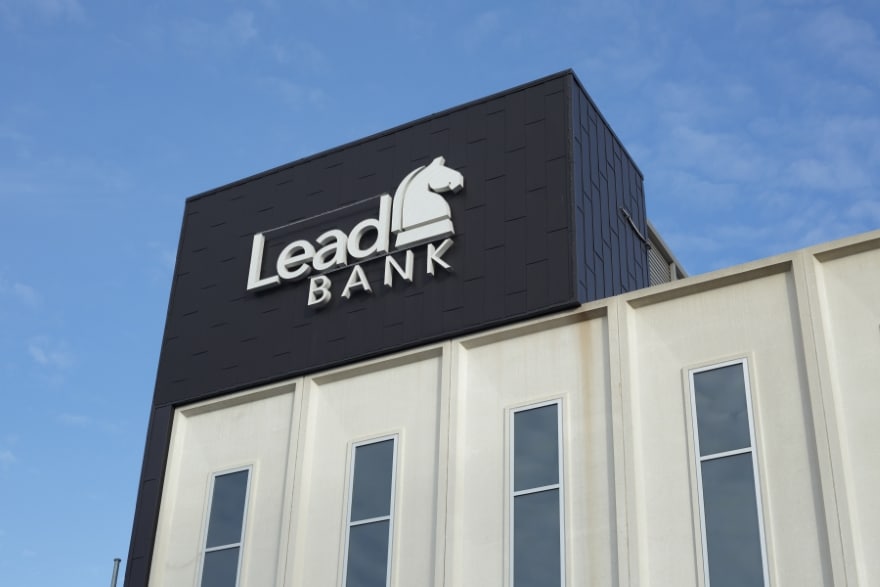 Pine says Lead Bank hopes to offer a traditional credit card with Self in the future. The goal, along with helping people build or improve credit, is to enable them to save and manage their finances and keep them as customers long after their credit is established.

Partnering with Self has allowed Lead Bank to expand its customer base outside of Missouri, as have its other digital offerings. In 2019, the bank partnered with Dama Financial to provide banking services, including a digital wallet, for cannabis companies.

“It may have seemed like a risky decision for a bank, but as we dug into it, our process enabled us to analyze and mitigate those risks so that we could find opportunities where others shied away,” Pine says. “The increasing pace of legalization and possible federal legislation indicate to us that this industry is here to stay, and that by innovating early, we have established expertise.”

Working with Dama Financial has been “a huge learning opportunity,” Pine says. It’s taught the bank how to innovate with technology and set itself apart.

The partnerships with Dama and Self have been part of Lead Bank’s new banking as a service platform. The platform, which continues to be developed by the bank’s new chief technology officer, supports financial technology companies that need banking services on the back end.

The platform brings in new partnerships, which require Pine and her teams to “vet each opportunity.” She does due diligence from a regulatory standpoint and examines the company’s IT, legal and financial functions. She also reviews and negotiates contractual points, such as revenue sharing, data and customer privacy. 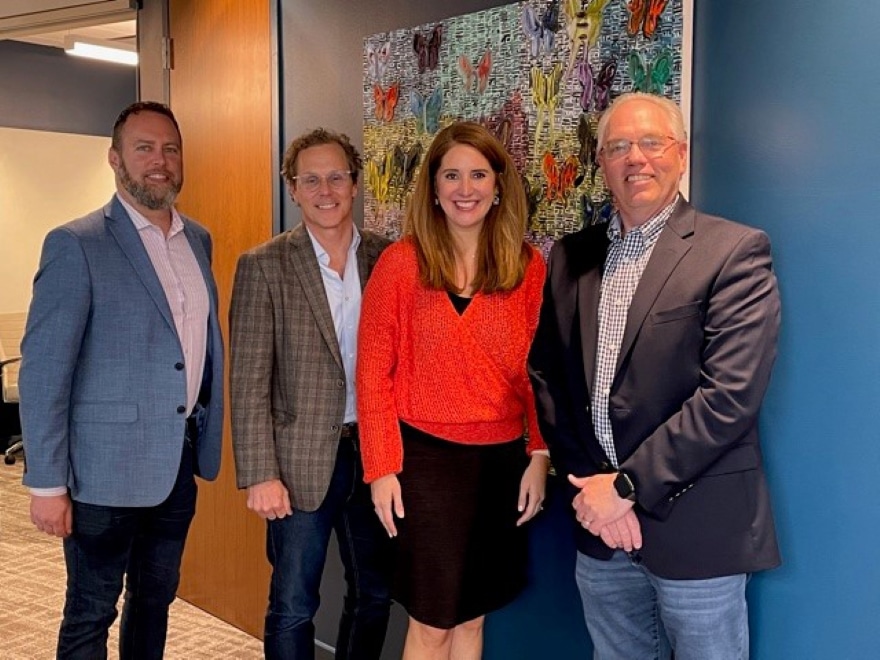 Pine works with outside counsel to ensure Lead Bank is compliant with state regulations, particularly in the area of consumer lending, and she works with the chief technology officer on digital strategy, including meeting the needs of “digital-first customers.”

Pine is a member of Lead Bank’s digital architecture task force, which is develops the technology and data strategy for the Bank’s ambitions.

“The intent is to create a technology and data infrastructure that can serve national consumers and businesses in a secure, flexible, digital environment,” she says. The task force also manages the bank’s relationship with Fiserv, a company that provides recordkeeping for financial services and banks.

“I never imagined that a primary focus of my work as general counsel would be thinking through the implementation of new business lines enabled by technology, but it’s been really interesting and so important to us as a bank, because it gives us a competitive edge and a way to better serve our customers,” Pine says.

While technology and banking are new focuses for Pine, they’re in line with the goals she made for herself when she left private practice.

The bulk of her career was spent as an equity shareholder and litigator at McDowell Rice Smith and Buchanan, a firm in Kansas City, where she started as an intern and rose through the ranks. After 7 1/2 years with the firm, she was seeking a new challenge and more time with her family, so she left to work in-house for Mariner Wealth Advisors, also in Kansas City. 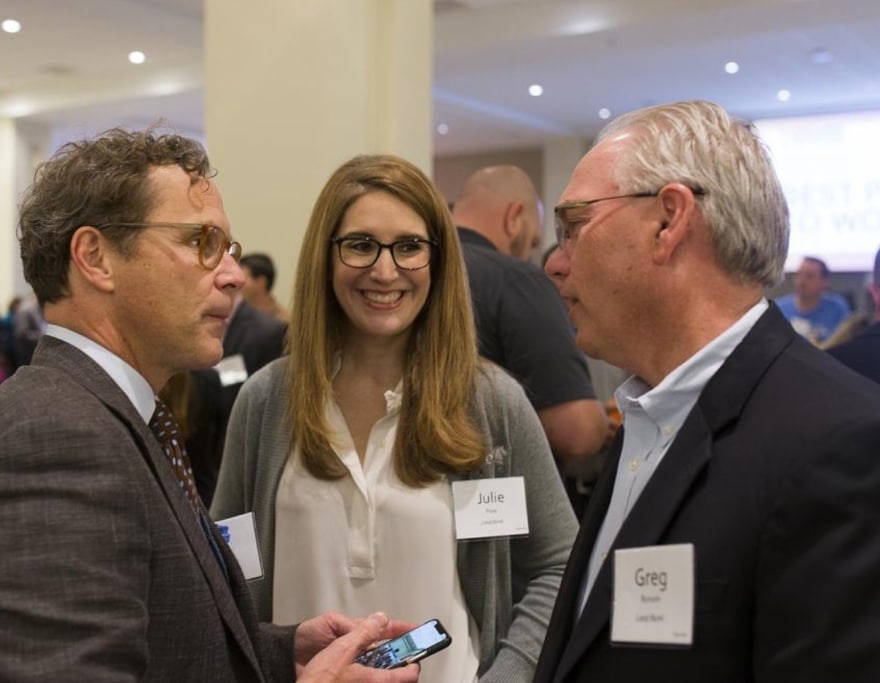 Pine was with the financial services company for over three years as a general counsel. She decided to join Lead Bank because she “felt I could make more of an impact by being involved in business development and strategy.”

She says she’s grateful to Lead Bank’s CEO Joshua Rowland, who also has a legal background, for seeing the value of hiring the bank’s first in-house attorney to create a legal and risk department. The position has allowed her to leverage her legal skills in the business world, and inadvertently, the technology world.

“In past jobs I’ve held, my role has been more about reacting when something’s gone wrong,” Pine says. “I prefer to be more proactive and forward thinking. I really enjoy managing my teams and impacting all different business lines—it’s extremely fulfilling.” 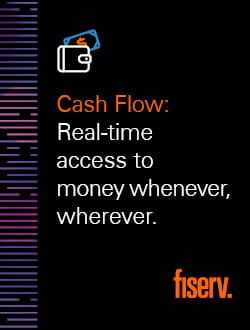 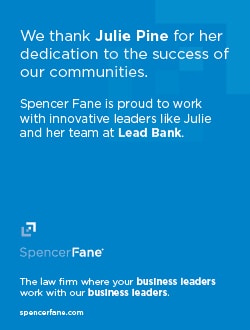