Formed in 2001 as the result of a merger between AmeriSource Health and Bergen Brunswig, AmerisourceBergen is a pharmaceutical services company that aims to reduce health care costs and improve patient outcomes through the distribution of affordable pharmaceuticals, over-the-counter (OTC) products and home health care supplies as well as innovative partnerships with global manufacturers, providers and pharmacies.

Serving hospitals, health systems, pharmacies, physicians and clinics, AmerisourceBergen is a leader in the wholesale drug market and handles nearly 35% of all pharmaceuticals sold and distributed throughout the country. The company also provides pharmaceuticals and pharmacy services to long-term care, workers’ compensation and specialty drug patients and ranks 12th on Fortune 500’s 2016 list.  In addition to its US operations, AmerisourceBergen through its affiliates operates in over 50 countries internationally. 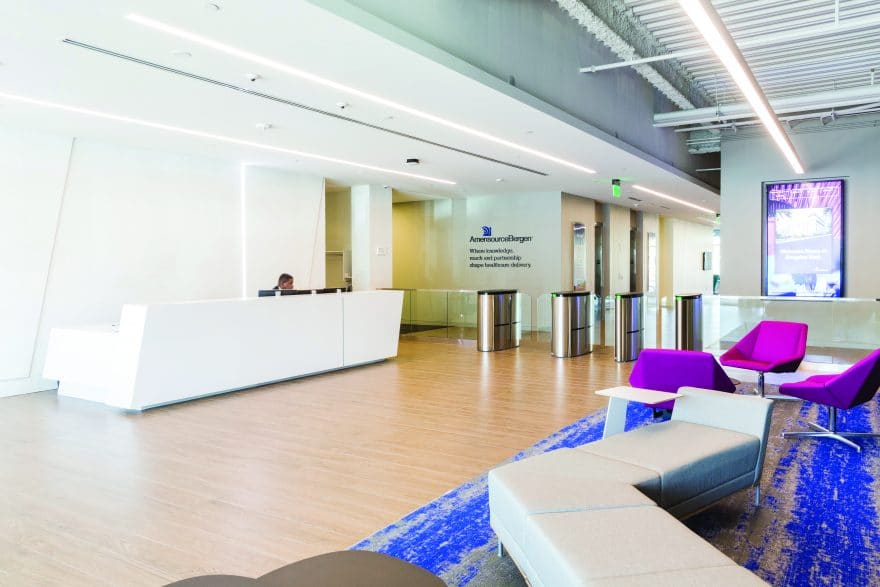 “What is extremely important is that each business unit feels that I am invested in their success, and I am. To me it’s one for all and all for one. I see myself as contributing to the whole and to each area’s individual success,” says Gibson.

While Gibson’s legal career began at a law firm, he has taken to the more business-facing aspects of life as an in-house counsel. “It’s not something that I was necessarily looking to do, but I’ve found that it’s an aspect of my job that I enjoy,” he says.

Gibson first experienced this mixed legal-business role during his nine-year stint as associate general counsel and director of global compliance at Southco Inc.  He also helped to run the company’s new global distribution program, giving the attorney a chance to gain some hands-on experience in the sales side of the business.

“They found that my discipline and critical thinking skills as a lawyer really helped them as a business,” he says. “And I’ve been able to bring some of the sales experience back into my legal role. Now when I’m on the phone with a customer I’m always thinking ‘how can I help close the deal and how do I best negotiate this deal?’ After all, we are all sales people, though sometimes it’s challenging for lawyers to see themselves in that role.”

Recently Gibson has been part of a team pushing to improve and standardized certain business practices in an effort to increase efficiency and improve customer service.

To that end, AmerisourceBergen recently introduced in one of its global business units a new central mailbox system designed to improve response time, clearly define accountability and reduce the burden on the company’s legal staff. Instead of tracking down an individual staff member, the company’s clients can send all their queries to a central repository, which are then directed to the appropriate individual.

Along with the mailbox the team helped design a delegation of authority.  “When a client sends along an agreement, it’s often up to legal to vet the contracts. By assisting the business in putting together an internal delegation of authority, the business knows where it needs to go internally to get these approvals, so it speeds up the process, takes work off our plate and clarifies when an agreement is OK for us to approve,” he says.

While this approach might not work for all companies, AmerisourceBergen’s considerable size and annual revenue — 18,000 employees and $135 billion, respectively — necessitates the use of such standardized processes. “It might be a little bureaucratic for some organizations, but if you structure it well it can be a great enabler to define roles and responsibilities,” says Gibson. “We’re continually moving toward creating systems that handle routine matters and as a result, freeing up resources to handle larger innovations and projects.  And it’s very much a team effort.  Everyone on the legal team needs to be rowing in the same direction and speaking with a common voice.”

By standardizing such tasks, Gibson and the other members of his team have been able to remain focused on the strategic initiatives that drive the company’s growth. “It’s very easy to get bogged down in the weeds. The challenge is to step back and look at what is most important at the time while meeting the daily needs of the business,” he says. “I understand that by focusing on and reminding myself to come back to the bigger picture, I will help create success.”

A stakeholder from the start

Gibson credits his success in the field to both his proactive nature and passion for problem-solving. By working closely with clients and understanding an issue, he is able to offer greater legal insight than those legal professionals who might only arrive on the scene after the fact. “You have to be in the game so to speak. It’s not about parachuting in and solving the problem, you have to be there to help in the early stages,” he says.

For this reason, Gibson likes to remain involved in key issues rather than simply relying on outside counsel to process work. While he is not completely averse to calling in additional attorneys, Gibson tries to ensure that as much of the groundwork as possible has been done before AmerisourceBergen turns to outside counsel. “Outside counsel is invaluable, but it can be too easy to rely too much on them. Many times, I like to be 80 to 90 percent there before calling outside counsel,” he says. “They are either confirmatory or I have gotten as far as I can go.”

To help reduce the company’s dependence on outside counsel in international markets, the international support team is also leading a charge to have more of AmerisourceBergen’s contracts written in English, thereby reducing the number of foreign language-speaking lawyers who must be called into draw up contracts in other languages. “By negotiating contracts in English they will get it done quicker, cheaper and ultimately it will be more efficient for the company,” he says.

As the associate general counsel at a pharmaceutical wholesale company, Gibson takes pride in the fact that AmerisourceBergen is working to improve health care outcomes while reducing cost. He is particularly proud of the company’s work with community pharmacies, which he sees as an essential part of the health care industry. “We target and support these and make sure the local pharmacies remain viable to serve the local communities,” he says.

Through promoting an increased emphasis on standardization, reducing the company’s dependence on outside counsel and supporting the business side of the operation whenever possible, associate general counsel David Gibson will continue to help AmerisourceBergen remain a market leader.