Some people approach life like a blank canvas. Paul Neumann approaches life like a fresh piece of copper.

Neumann is executive vice president and general counsel for Trinity Health, one of the largest multi-institutional Catholic health care delivery systems in the nation, serving more than 30 million people across 22 states, and headquartered in Livonia, Michigan. Neumann is also an artist. He specializes in etching, and copper is his medium of choice.

In a nutshell, etching goes something like this: scratch a design into a metal plate that’s been coated with a special substance. Then, when the plate is immersed in acid, the scratched areas react and become deeper grooves, and the coated areas are unchanged, which allows the plate to be used as the negative in an ink press. 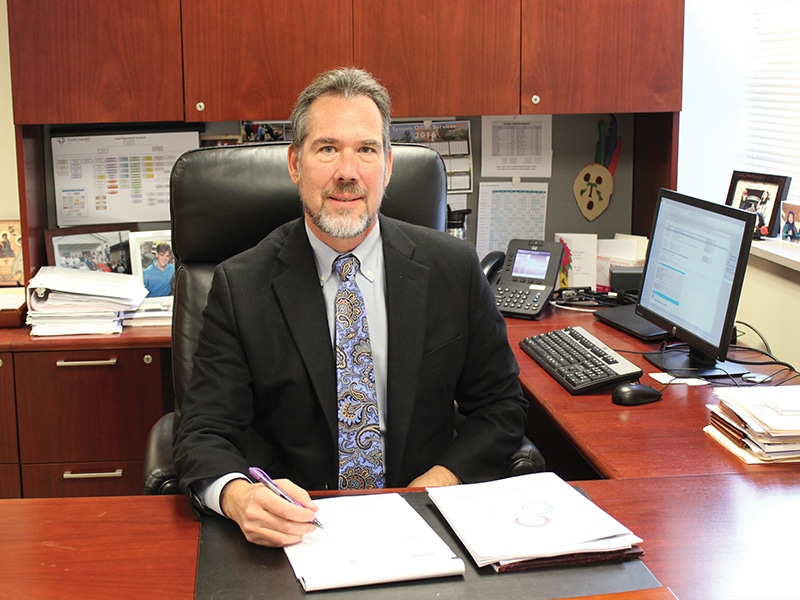 Like practicing law, the process of etching is very precise, requiring attention, and comes with serious risks (i.e. acid burns).

“My art and my work require many of the same skills,” Neumann says, “Deep concentration, precision, understanding, technique…it’s the idea that if you change one thing it affects other things.”

One fresh start after another

As general counsel for Trinity Health, Neumann oversees a legal team of 58 attorneys. Together they support 93 hospitals and 120 continuing care programs that include PACE (Program for All-Inclusive Care for the Elderly), senior living facilities, and home care and hospice services.

When Neumann joined Trinity Health in 2007, he was given a fresh piece of copper, so to speak. He was recruited out of retirement by Trinity Health’s president and given free rein to restructure the legal department.

At that time, most of the system’s attorneys reported to the CEOs of individual hospitals. Some had never met the general counsel. Some operated like counselors who attended board and business meetings, and others acted like scribers—“you throw a contract over the transom; they throw it back and never meet with you,” Neumann says.

Neumann essentially turned Trinity Health’s legal department into a virtual law firm. He required that every attorney based in the field report to him, periodically visit the home office and contribute to the system as a whole.

Gone are the days of having a legal department full of attorneys who just wanted to be lawyers. “We now have attorneys who are willing to be counselors who understand the industry and who can augment legal advice with business sense,” Neumann says.

He told the hospital CEOs that if they didn’t want to hear “no” as an answer, they had to bring attorneys in at the beginning of contracts or negotiations. To his surprise, within six months the approach won over the CEOs. The attorneys were happier. Legal costs were down. Things were done consistently from one attorney to the next.

It’s gone so well that when the legal department sent a client survey to its CEOs and department heads, it scored a 3.86 on a 4.0 scale. Neumann is proud of that but says it’s all thanks to the very dedicated attorneys of Trinity Health.

“I have not heard a ‘lawyer joke’ in years,” he says. “And, as you can imagine, that’s refreshing!”

Trinity Health wasn’t the first health system to give Neumann a blank slate.

Neumann worked in California with Foley & Lardner LLP for 10 years, first as an associate and then a partner. He practiced in health care business and corporate law, and dealt with issues including hospital operations and formations, managed care contracting and integrated delivery systems.

“It was almost like a master artist being [told], go paint whatever you want to paint, rather than do a portrait or do a landscape,” Neumann says. “I could do whatever I want with it.”

Life lessons and room to grow

Neumann has encountered that “take your vision and run with it” kind of freedom throughout his life. He was born in Austria to American parents—his father worked for the U.S. Foreign Service—and raised in Berlin and Nigeria. He attended Haverford College at a time when the Quaker school’s president encouraged students to spend time away from campus.

“He thought you get just as much education outside of school as you do inside,” Neumann says.

That gave Neumann the flexibility to spend a year working as a hospital orderly, doing everything from “tagging toes and taking people to the morgue” to cleaning them and getting them food. He also spent time with the Pennsylvania State Legislature’s judiciary committee in Harrisburg, Pennsylvania, where he drafted laws and worked on state bills.

When an Austrian etching professor found out Neumann was born in Austria, he encouraged Neumann to take his class. Neumann had the flexibility to do that, and fell in love with the art. He continued to study etching at the Corcoran School of the Arts & Design in Washington, D.C., after he graduated from Haverford. For a few postgrad years, he etched and worked as a freelance writer.

The time spent in Harrisburg taught Neumann he could go to law school and do a “myriad of different things,” so he decided to apply. First, though, he took an around-the-world-trip. When he got back, all of the law schools he applied to had accepted him, and the University of Virginia Law School was so impressed by his travels it gave him a full scholarship. Because Neumann had worked in hospitals, he found himself gravitating toward healthcare law.

Today Neumann takes pride in working for an organization that makes a difference in people’s lives and helps the underserved and disadvantaged.

What really keeps Neumann going, though, is his art. His etchings have been sold in galleries in Washington, D.C., and Colorado, and he looks forward to retirement, when he’ll spend more time etching.

“That’s still very, very important to Trinity, and it tends to attract those types of people,” he says.

While at CHI, Neumann helped start a corporation that linked CHI hospitals to hospitals overseas to help them with finances and training. He traveled to countries like Ethiopia, Tunisia and Vietnam to sort out visas and legal details. At one point, CHI sold a hospital in Albuquerque, New Mexico, and left $80 million to the community for non-institutional healthcare initiatives, like breast cancer screenings and work on Native American Indian reservations. Neumann helped oversee that too.

What really keeps Neumann going, though, is his art. His etchings have been sold in galleries in Washington, D.C., and Colorado, and he looks forward to retirement, when he’ll spend more time etching.