Beginning as a startup company nearly 20 years ago, Applied Optoelectronics Inc. (AOI), specializes in manufacturing fiber optic networking products and technologies used in cable television broadband, internet data centers and fiber to the home markets. After the company acquired subsidiaries and operations in Asia in 2006, AOI’s general counsel at the time was looking for an assistant who could not only help handle the workload, but one who could also speak the language. David Kuo was brought on board to fill that role while still attending law school at the South Texas School of Law. At the beginning of his career with AOI, Kuo’s primary role with the company was managing and integrating the legal operation of the newly acquired Asia operations with the company’s headquarters. Upon graduation, Kuo was offered a position as a full-time corporate counsel and manager of Asia legal. 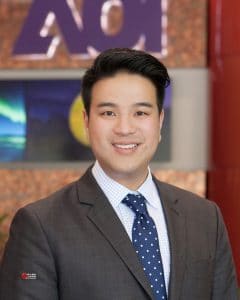 Knowing that he wanted to be an attorney since he was a child, Kuo entered law school with the intention of becoming a litigation attorney. While in law school, he found that he preferred the business side of law rather than being in court. “What appealed to me is how law can actually play itself out in the real world,” says Kuo. “The position I’m in allows me to witness how certain laws are drafted to safeguard certain transactions.”

An additional aspect that Kuo enjoys about his job is that he considers himself and his department part of a bigger business team. “At the end of the day, we all share the same goal and that is to grow this company,” he says. “I also get to indulge in my interest in business, which is what my undergraduate degree is in.”

While Kuo has watched AOI grow from a private startup to a public company, his initial plan was not to go into the startup world of business. “When you get out of college you’re looking for job security and financial stability,” says Kuo. “I was very fortunate in the fact that AOI has done well and after we took the company public, the CEO and the board offered me the position as general counsel of the company.”

Since taking on the general counsel role, Kuo has advised and managed the legal aspects and risks that AOI faces. During the recession, AOI went through several rounds of private placement fundraising, which consumed a fair amount of Kuo’s time. When the company decided to go public in 2013, Kuo focused on conducting necessary due diligence and preparing the company for its initial public offering.

Since AOI went public, Kuo has been focused on regulatory compliance. As AOI continues its growth momentum, Kuo now operates with a full legal staff with teams in the U.S., Taiwan and China. “Now I can make sure that all legal matters small and large are handled properly,” says Kuo. “It used to be very challenging to ensure that all legal matters receive proper attention when you have to manage the legal affairs of three operations with just one attorney located in the U.S.”

AOI began with just 12 employees when it was founded by Dr. Chih-Hsiang (Thompson) Lin, who is also the company’s president, CEO and chairman of the board. Dr. Lin founded AOI while working as a research associate professor at the University of Houston. The company began in a lab with Dr. Lin and his group of Ph.D. students until it privatized in 1997. The mission of AOI is to develop breakthrough technology and to bring life-changing products that affect people’s lives.

AOI is currently a leading provider of optical components and has delivered industry-leading revenue growth at a compound annual rate of approximately 40 percent over the past three years. As of today, Applied Optoelectronics Inc. employs over 2,700 employees worldwide. “Our core is still in fiber optics manufacturing,” says Kuo. “The growth this company has seen in such a relatively short time, and for me to be a part of this journey, has made this an amazing experience.”

The three main markets of AOI are internet data centers, cable television and fiber to the home. Some major customers of the company within these markets are Cisco, Arris, Microsoft and Amazon. “We’re the people behind the scenes who provide some of the key technology that drives higher bandwidth to home” says Kuo. “And we also produce the transceivers and optical components, which increase the speed in which data are transmitted and received.”

The fact that AOI develops technology and products that have an effect on the everyday lives of people is an aspect of Kuo’s job that he finds rewarding. “For example, for a consumer to utilize 4K television, you need to have the bandwidth to download the 4k content,” Kuo explains. “This company focuses on innovation that drives the increase to that bandwidth so data can be transferred a lot quicker.”