Baptism under fire. Drinking from the firehose. A battlefield promotion.

Giovanni M. Insana rattles off the cliches with a chuckle while acknowledging how matters have become much more manageable since January 2021. That was when he joined the Petco legal staff as the company went public for the third time.

“It was all of that and more,” Insana recalls. “But I’ve had a lot of experience in high-stakes deals at law firms and that helped me succeed in getting our initial public offering through the finish line.” 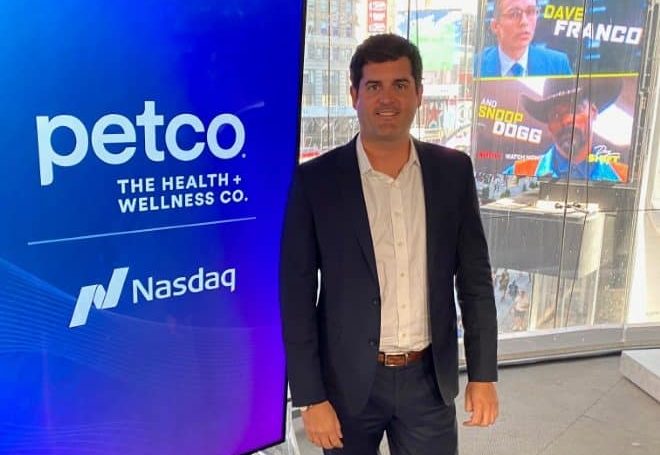 Indeed, there were many details to tend to as the national retailer returned to Nasdaq—this time under a new ticker (WOOF, naturally). According to Insana, the move was a logical one for Petco to raise capital and have wider access to the public markets with its private equity sponsors CVC Capital Partners and Canada Pension Plan Investment Board retaining majority ownership post-IPO.

Having come to Petco well-versed on securities and corporate finance, Insana was tasked with quickly assembling the company’s securities function and ensuring compliance with SEC and Nasdaq rules. He also helped establish governance protocols, including the company’s insider trading program, external communications training, internal policies and the board’s compliance roadmap. Then there was a debt refinancing completed in March 2021, followed by a secondary stock offering by Petco’s sponsors later that year.

“You don’t have to worry as much about many of these things when the company’s private,” says Insana, who recently was promoted from associate general counsel to vice president of legal, securities and M&A. “When you’re public, you’re navigating a robust regulatory landscape with numerous stakeholders to consider, many times with conflicting expectations. But it’s been an incredible experience.”

Lots in a name

With Insana fine-tuning the details, this past May the company closed the acquisition of Thrive Pet Healthcare’s half-stake in the parties’ joint venture that since 2017 had run nearly 100 veterinary hospitals at Petco stores under the THRIVE brand. Now with more than 200 full-service hospitals under Petco’s brand, Vetco Total Care, Insana expects that number to more than quadruple while he assists the company in acquiring stand-alone practices as well as pursuing organic growth.

He’s also working on Petco’s investments in product brands, including an expanded relationship with JustFoodforDogs, a provider of premium fresh and frozen food and treats. While the two companies have had ties since 2018, Petco has extended its brick-and-mortar exclusivity with JustFoodforDogs, broadened online distribution of its products and could acquire an equity stake. They’re co-developing a human-grade fresh and frozen brand food for Petco’s Wholehearted Line as well as a custom-food program at Petco’s pet care centers. 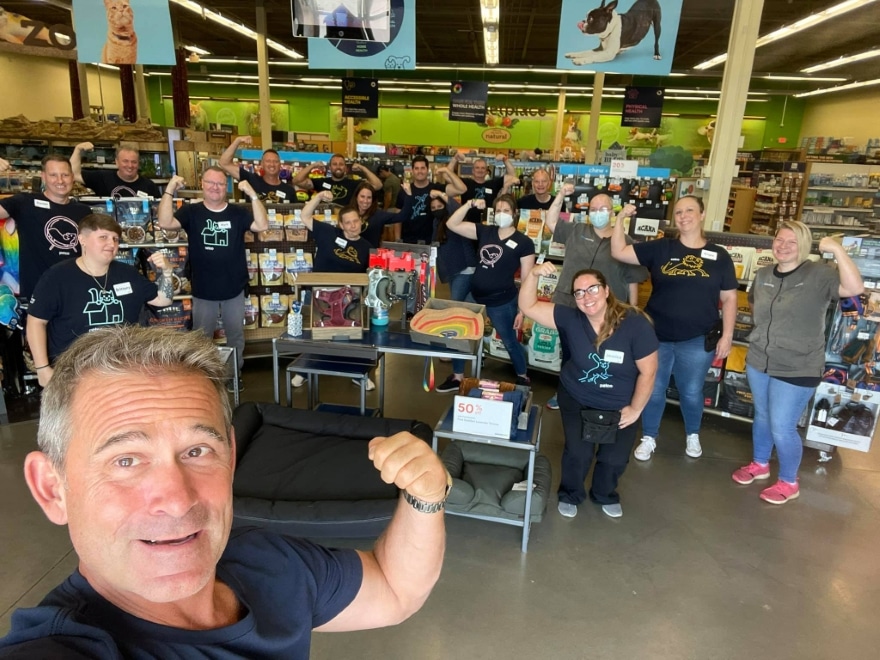 Then there’s been Insana’s role in modernizing a legacy investment in Rover.com, the world’s largest online marketplace for pet care. He oversaw Petco’s interests as Rover went public, followed by the monetization of Petco’s investment through a secondary offering. Petco’s customers can also now access Rover’s services through Petco’s e-commerce platform.

“During the pandemic, pet ownership skyrocketed,” Insana says. “Millions of incremental pets were adopted—everyone wanted a puppy or kitten. Petco was a big beneficiary of this pet ownership and related humanization trends that we’re seeing.”

Its independent nonprofit Petco Love works with outside groups in finding homes for 6.5 million animals to date and providing 1 million free vaccines. All of which makes Insana feel like a good fit. 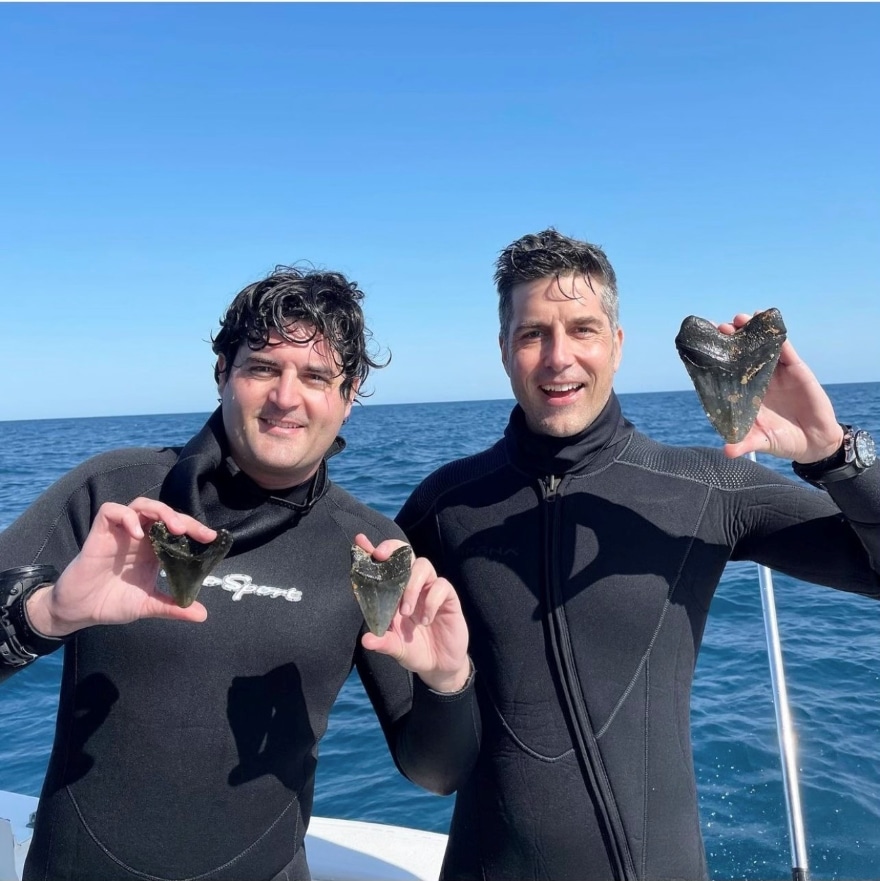 A chemistry minor as an undergrad, he mulled being a veterinarian as a child though that gave way to University of Pennsylvania Law School and transactional law as his main interest, supplemented by pro bono work.

At international law firm White & Case in New York City, he was immersed in complex public and private cross-border M&A while teaching the basics of law at underprivileged schools and representing women in cases involving domestic violence, child custody and spousal support.

At Dechert in Philadelphia, it was M&A, venture capital and securities work, as well as assuming a leadership role in the firm’s landlord-tenant pro bono practice group. Insana chose his first in-house position at Delaware-based technology company InterDigital, where he could practice securities and M&A law.

All those positions prepped him for Petco, a San Diego-headquartered company that he primarily serves remotely from his Philadelphia home.

It’s still a pet-free home, but that might change soon, what with Insana’s two small children nearing the “Can we get a puppy?” age. His own youth having been enhanced by a beagle-collie mix, a yellow lab and a couple cats, there’ll soon be furry friends in his household. Aside from previously volunteering at the Adventure Aquarium in nearby Camden, New Jersey, Insana is a scuba diver. Over the years he’s developed a particular affinity for diving in North Carolina’s coastal waters, where he hunts for the dental remains of the megalodon shark, the 50-foot predecessor of the great white shark that’s been extinct for over 3 million years.

And Insana might have more opportunity to dive now that Petco’s status as a public company is up and running with much help from him.

“I’m a pragmatic, business-minded lawyer providing legal advice from a business perspective as opposed to textbook,” Insana says. “So far, that mindset and approach has helped me succeed and earn a great deal of trust from my clients, both in-house and external.” 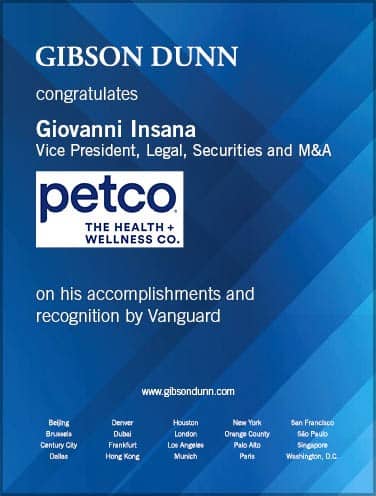