Leading the legal and environmental function at a major uniform provider

G&K Services is one of North America’s leading uniform companies. Based in Minnetonka, Minnesota, G&K has been providing custom uniforms, facility products and services for more than 100 years. Since 2006, general counsel, vice president and corporate secretary Jeff Cotter has been helping the company maintain its stellar reputation for company culture and sustainable business practices.

Cotter draws on his considerable experience in the private practice realm to help meet the myriad legal needs of G&K Services, which has approximately 8,000 employees in the U.S. and Canada. As an attorney with a long-held interest in the world of business, Cotter sees his role at G&K as one of advocacy and support, not overcautious pessimism. 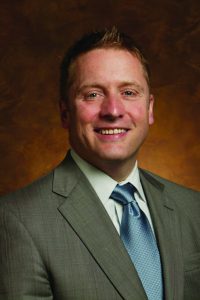 “I have built the legal function here to be nimble counselors and advisors to the entirety of the business,” he says.

Founded in 1902, G&K Services began as a Minneapolis family-owned dye house that also offered door-to-door laundry and diaper service. The company introduced a chain of drive-in cleaners in the 1960s, expanded into Canada in the 1990s and launched its direct-purchase division, GKDirect, in 1996.

In part, G&K’s growth has been driven by acquisition, with the company completing more than 15 such transactions since 1991. G&K is now facing an acquisition itself as the company agreed to be purchased by its largest competitor, Cintas Corporation, in the late summer of 2016.

The company specializes in providing branded uniforms for companies in a range of industries, from automotive and transportation to energy, manufacturing, food processing, health care, retail, security and hospitality.

G&K Services offers a line of shirts, pants, shorts, outerwear and coveralls for rental or purchase, as well as specialty products designed for laboratories and food service environments. The company also carries a full line of fire-resistant and arc-rated clothing as well as high-visibility safety clothing.

“Ours is a very personal, almost intimate business because the uniforms we provide are going to be on you and your body all day, so they’ve got to feel good and be comfortable,” says Cotter.

While the company is focused on helping employers ensure professional, safe workwear for their employees, G&K Services also provides a wide range of workplace essentials and facility services that include restroom supplies and floor mats, process control services, cleaning supplies and employee lockers.

In many ways, it’s G&K Services’ commitment to environmental stewardship that truly sets the company apart. As a leading uniform supplier, the company uses considerable amounts of water, energy and chemicals as it launders millions of uniforms each week. Given the potential environmental impact of these resources, G&K Services does all it can to employ the most sustainable practices.

“G&K’s is an industry leader in the area of environmental practices. It’s part of our core values and a key focus area for the entire organization,” says Cotter, who took on the role of sustainability steward in 2008. “At the time, our then-current CEO was looking for somebody to really dig into it and reorganize and reenergize the function and lead it to a place where we felt like it deserved to be,” he says.

As a role distinct in almost every way from his regular job as the company’s leading legal mind, the environmental function has been a welcome addition to Cotter’s toolkit.

The sustainable initiatives are focused largely on the company’s laundering practices and range from reducing water use and recapturing heat to reducing the use of chemicals and overall energy consumption.

The company launched a wash floor optimization and recycling program that has helped to reduce freshwater use by as much as 60 percent, with a water reuse program accounting for 25 percent of that reduction.

“We use a considerable amount of water and have gone out of our way to reuse water. We’ve also figured out a way to reclaim heat from the water so we don’t have to use as much energy,” he says.

The company has also voluntarily switched to an innovative wash formula that eliminates the use of nonylphenol ethoxylates (NPE), chemical compounds known to impact estrogen levels. Overall, wash floor chemical use has been reduced by up to 30 percent, while wastewater treatment has allowed G&K Services to cut its wastewater sludge generation by half.

“There are a lot of areas where we’ve gone out of our way to ensure our environmental footprint is appropriate,” Cotter says.

A commitment to diversity and inclusion

Company culture has been another central focus of Cotter’s time with G&K Services, which was named one of Canada’s best employers for 11 consecutive years based on the results of a study conducted by Aon Hewitt, and, for the second straight year, one of the “50 Best Companies to Sell For” by Selling Power magazine. The company was also recently recognized for being named to the Honor Roll of the 2015 Minnesota Census of Women in Corporate Leadership. The Honor Roll is an elite group of Minnesota Companies that have 20 percent or more gender diversity in their executive ranks and on their Boards of Directors.

“We’re working to keep G&K the great place it is by working to develop people and help them reach their full potential,” he says.

Looking to the future, Cotter says these inclusion efforts will become more vital than ever as the next generation of employees begin to enter the workforce and bring with them a very different set of expectations. “In less than four years about 40 percent of the workforces are going to be millennials. They are different, so we’re thinking about ways to make G&K a more attractive place for them,” says Cotter.

As general counsel, it’s also Cotter’s responsibility to draw on his experience in the legal field when it comes time to hire outside counsel. Having worked as outside counsel during his time with law firms, Cotter is well-familiar with what it takes for outside counsel to be successful.

An impressive record of growth

G&K Services has experienced considerable growth the last decade, more than doubling its share price over a 10-year period. Cotter credits this growth to the team’s ability to focus on and achieve the ambitious goals it has set for itself.

“We launched the initial game plan, and achieved those metrics in the timeframe we set forth,” he says. “We were in the distinct minority of similarly-situated companies that publish time-bound goals, which really speaks to the level of focus and discipline with which we’ve approached the business, as does our successive achievement of additional goals.”

While leading the legal department at one of the country’s largest uniform providers takes up a considerable amount of Cotter’s waking life, the general counsel still finds time to spend with his wife and four children.

Serving as the company’s top legal adviser while maintaining the company’s commitment to environmental sustainability, diversity and inclusion, Jeff Cotter’s tireless efforts as general counsel, corporate secretary and vice president have helped G&K Services lay the groundwork to become one of the best performing companies in the industry.