Never too much on her plate

Jennifer McConnell remembers how she worked her way through college and law school waiting tables. Cheerful and eager to please, she reflected well on every restaurant where she’d greet customers, take their orders and make sure their drinks stayed full.

While being a career waitress wasn’t in the cards, McConnell learned early how the skills of restaurant work could be applied to any customer-driven business. More so, if those skills could be enhanced by business savvy and a law degree. 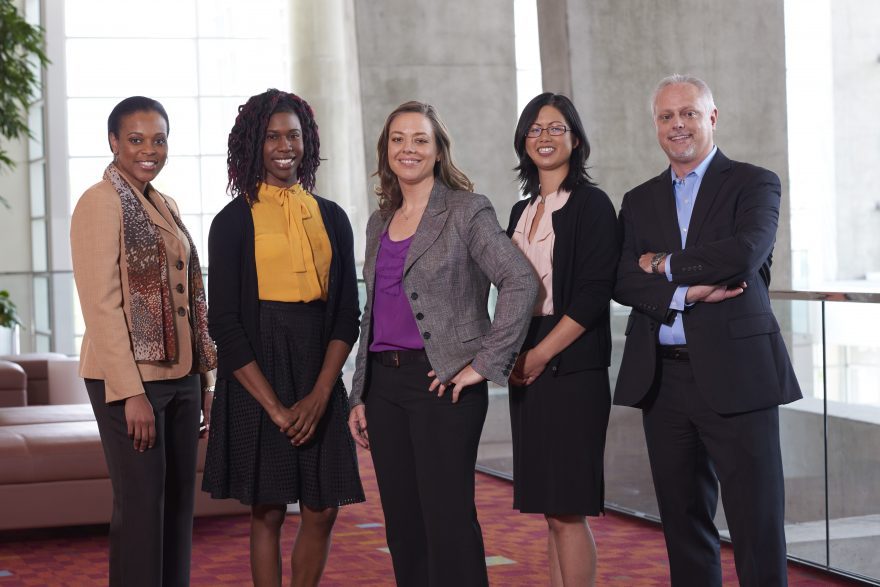 That said, it’s unlikely that while a student at Loyola University School of Law in New Orleans 20 years ago, McConnell ever envisioned she’d be taking her lessons to this level.

In 2002, just two years after earning her juris doctorate and working short stints for McGuireWoods and Kilpatrick Stockton, McConnell came aboard as a junior lawyer for the North American operation of the British-based food and support services heavyweight, Compass Group, ascending to general counsel a dozen years later and supervising a team of about 40 lawyers and an equal number of support staff.

And sometimes seeing a need for clearing the tables.

As Compass Group grew in North America throughout the early 2000s, about 100 lawyers among 65 firms had been entrusted with handling the company’s growing auto and general liability litigation docket. Capable as they might have been, there were just too many lawyers in the mix to be managed efficiently, and not a consistent enough approach to defending the many claims that can confront a company that provides food and beverage services at a variety of venues all over the United States and Canada.

“I didn’t see such a scattered approach as an efficient way to manage such a sizeable caseload,” McConnell tells Vanguard from her office in Charlotte, North Carolina. “We had to find a better and more effective way to handle these claims.”

So in July 2015, she brought in an assistant general counsel, Mike Roberts, who had distinguished himself in a similar role for nearly five years at ADT, a home-security company. The University of Kansas law grad had also logged a decade at Kansas City-based Shook, Hardy & Bacon. After extensive review of the legal outsourcing, McConnell and Roberts opted to put that firm in charge of all liability claims.

“An arrow approach,” in McConnell’s words. On target, and cost- and time-efficient. “The antithesis of the scattered approach.”

She’s just as direct on other aspects of running the legal team.

With several law schools in proximity to Compass Group’s headquarters, the area is teeming with young legal talent that McConnell helps nurture as well as harness for the company’s future needs. Under McConnell and her management team, Compass Group has been running an extensive internship program, giving the students meaningful work and sometimes bringing them aboard once they’ve graduated and passed the bar exam. 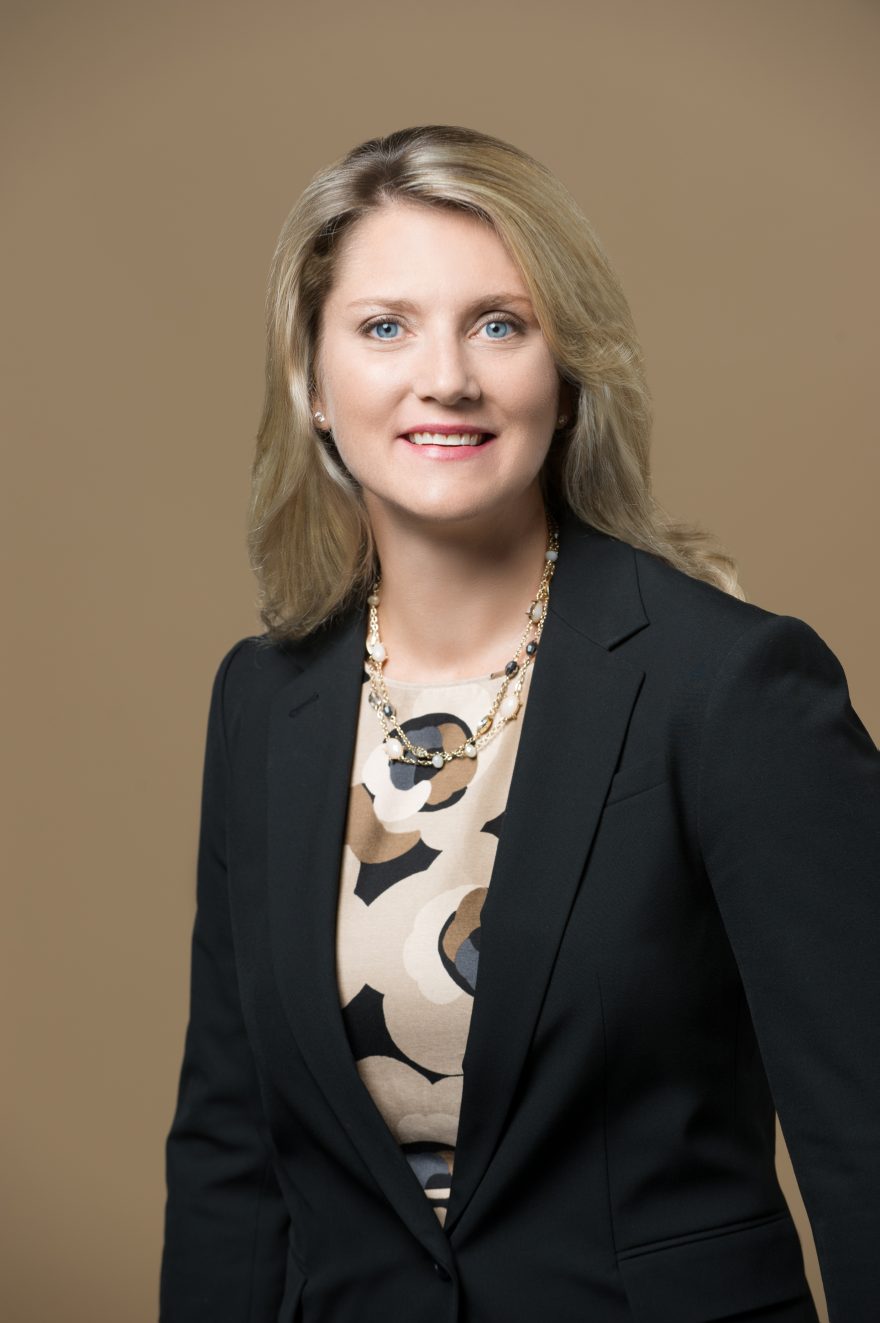 “It’s a very efficient way to bring on additional resources that we can train from the ground up,” says McConnell, adding that law interns are mentored while being allowed the liberty to show what they’re capable of doing. “We’ve hired eight former interns into our attorney ranks, and they have done very well here, with seamless transitions.”

Some have already received promotions. There’s Kelly Creech, a 2013 grad who handled herself well enough as associate counsel to earn a promotion to corporate counsel, weighing in on employment and compliance issues. Her classmate, Jeff Henry, has ascended from associate to corporate counsel for the litigation and matter management team. Then there’s Erich Johnston, a 2015 grad and a former associate editor of his law school’s Law Review, who has shown his versatility by moving around various legal departments and now serves on the healthcare contracting team as senior associate counsel.

“We look for adaptability, multitasking, commercial acumen and personality fit,” McConnell says. “We’ve found those traits in these young lawyers.”

They won’t be hungry for work. Or for opportunities to engage in the company’s support of progressive causes, such as sustainable agriculture and seafood, and humane treatment of farm animals. Compass Group is an attractive place to build a career.

A company to count on

Compass Group is in growth mode, with revenues soaring from $5 billion when McConnell came aboard in 2002, to $17 billion last year, giving her team ways to weigh in on a host of legal and business matters.

The North American division of Compass Group is a family of companies with more than 20 operating sectors and sub-sectors in the food and support services markets. McConnell says, “We are built and continue to grow in this way in order to tailor our service offerings to the specific needs of our client institutions, which include hospitals, higher education institutions and K-12 schools, 98 of the Fortune 100 companies, sports arenas, senior living facilities, and even oil rigs in the Gulf of Mexico and Alaska. In essence, our team supports the legal needs of more than 20 different companies, each with its own distinct personality, culture and leadership team, all collectively providing food and support services to most all industry verticals.”

The growing variety of work makes McConnell glad she opted for an in-house role after early work at the firms, and she wants the members of her legal team to similarly immerse themselves in the opportunity that Compass Group offers.

“From the time I was a young lawyer, Compass Group provided me with the opportunity to be part of the company’s strategic vision and the implementation of business decisions,” says the now-married mother of three. “My responsibilities include balancing the level of risk tolerance across all of our 20-plus operating sectors on a daily basis. It’s a challenge I’m very happy to pursue with the support of a fantastic legal team.”

A go-getter from the start

McConnell has always been one to answer challenges. And looking back on her career, she’s quick to identify some role models, including her grandmother, Leona Hodges, who was office manager of a law firm in Baton Rouge. The way McConnell describes her, the venerable woman was as valued as any lawyer.

“When I’d visit her at the firm, I experienced first-hand the respect others had for her,” McConnell says. “I also met other female attorneys, and they helped draw me into the idea of becoming one myself.” 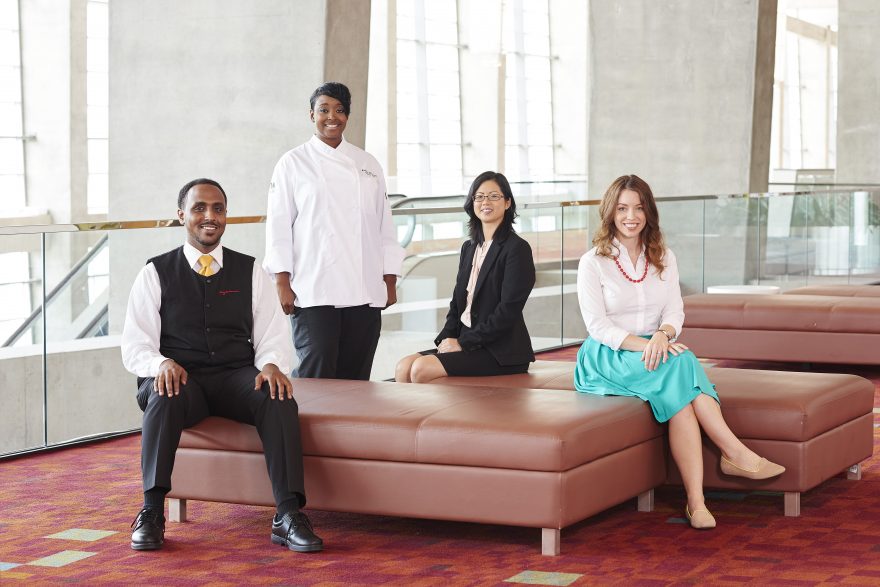 While an undergrad at Louisiana State University, McConnell got to work as a runner of sorts at the firm—a job that is in less demand these days with wired gadgets making information immediately. She so relished her runner duty that upon graduating LSU, she became a document clerk in a large law firm for a couple of years.

“I fell in love with the idea of being in a courtroom, working with lawyers and poring over the detail in documents,” she says.

But there’s a lot to love about practicing law from the inside, McConnell says. It just might mean a different approach when you blend the legal with the business.

“And, of course,” McConnell says, “remember where you’re from and stay humble.”

“I started out as a server for many years in restaurants before being lulled into law,” she says. “My hospitality and restaurant past and lawyer present have come full circle, and I am fortunate to practice law in-house for not just any company, but the North American division of the world’s largest food and support services company.” 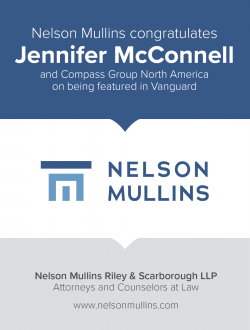 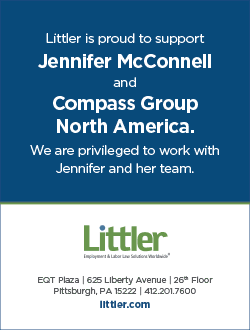 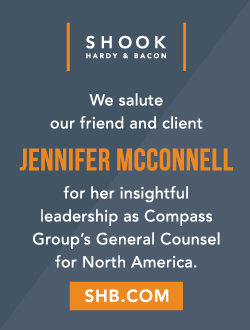