A starring role off the field

You could say that Kelvin Smith got into the game at a crucial moment that’s only intensified.

For it was last September when the now 32-year-old Harvard Law grad left his position as vice president of business and legal affairs of Learfield, a sports marketing company in Dallas, to assume the newly created position of senior associate commissioner and general counsel for the NCAA’s elite Big 12 Conference.

To say the least, a slew of game-changing matters were already making life interesting at the Irving, Texas headquarters. Perhaps the most sensitive were the health and safety of student-athletes, and whether they should be compensated beyond scholarships. Then there were the ever-growing transactional matters, borne from a shift in fans’ consumption habits from just watching games on network and cable television to online and mobile devices, as well.

But when Vanguard finally caught up with the very busy Smith for a lively chat in mid-May, his attention had shifted to the most recent audible that was the U.S. Supreme Court’s takedown of the Professional and Amateur Sports Protection Act, which limited sports betting—well at least the legal kind—to a handful of states, including Nevada.

As to what effect the august justices will have on the Big 12, well that largely depends on whether the states in which it operates—Texas, Oklahoma, Kansas, West Virginia and Iowa—opt to grab a segment of the $150 billion that Americans were said to wager on games last year.

Should any or all get into the game, there will be consequences aplenty that could be double-downed, depending on how another court matter is settled, possibly later this year.

“College athletics have never been more popular and have never generated as much revenue as they do now, and that’s already brought on a lot of scrutiny,” Smith says. “Now, the pie’s only going to grow bigger and put even more of a spotlight on the NCAA and student-athletes. Proponents of a pay-for-play system argue that there is a great disparity between what the NCAA takes in and the value of the scholarships student-athletes receive, a position I, of course, disagree with.”

That disparity could only grow if collegiate sports leagues demand a cut of what’s being wagered on their games. The National Basketball Association is tossing about the idea of a so-called “integrity fee”—a 1 percent charge of what’s bet on its games, the proceeds of which would supposedly go toward ensuring the integrity of the system.

If it goes without saying that the other sports leagues would follow suit, could the NCAA really be expected to stand on the sidelines?

Smith also reminds of another question that may not have garnered sufficient thought.

“Several proposed bills speak to sports governing bodies being allowed to retain a percentage of the bets,” he points out. “But it’s interesting to consider who would qualify as a governing body. Universities? Conferences? The NCAA?”

So it’s possible there could be some high-stakes competition between the NCAA and the member-schools for a bigger jackpot.

Meanwhile an ongoing court case is set to go to trial in Oakland this fall, and the plaintiffs would seem likely to use the Supreme Court’s verdict to bolster their argument for paying college athletes. After all, the value of a college conference’s broadcasting revenue would seem enhanced by the extra fan interest that would be generated through betting.

Ed O’Bannon, a standout on the UCLA basketball teams of the 1990s, initially sued the NCAA in 2014, claiming that it used his unmistakable digital likeness in a video game without due compensation. Ultimately, the Ninth Circuit Court of Appeals concluded that the NCAA was in violation of antitrust laws, and universities may provide student-athletes with scholarships up to the full cost of attendance beyond tuition, room and board, and books.

However the many legal and legislative matters are resolved, business opportunities abound for the Big 12. Smith’s acumen as a businessman figured heavily in the conference taking him aboard last year, and he seems to be acquitting himself just fine.

Smith’s youth is among his assets, as he’s able to relate to the new demographic that’s so indispensable to any enterprise. It’s a segment that sometimes needs to be approached differently. 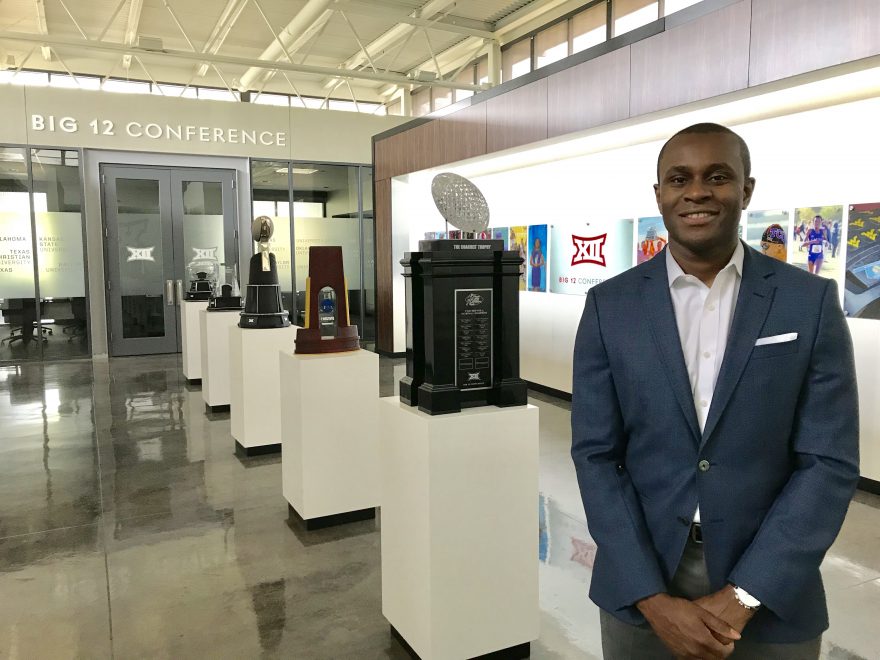 “One of the biggest issues that sports face—collegiate and professional—is that younger fans tend to gravitate to digital content rather than linear content,” says Smith. “We’ve got to harness that affection for mobility.”

Which seems to be in motion: Last year, Smith negotiated with Facebook the first ever distribution of a Big 12 game on the platform, with Texas Christian University trumping William & Mary on Dec. 22.

“We had people watching worldwide, as they could log in from anywhere,” Smith says. “Fans of each university were commenting on the show page in real-time about how they were watching from places on the other side of the world like Asia and Europe.”

While the ability to reach viewers worldwide—including military troops—is “extraordinary,” Smith says the flip side could be fewer fans at the turnstiles. But it’s a situation that can be dealt with through the marketing of the game experience, he says, mentioning how decades ago, the National Football League overcame lower attendance resulting from broadcasts of home games, eventually having no need for the 48-hour blackout policy.

Then there’s the growing popularity of women’s sports, particularly basketball. Furthering interest there dovetails well into Smith’s overall hopes of opening up opportunities for all young people—especially women and minorities—into what can be an insular sports world.

“It’s a difficult industry for anyone to break into, regardless of ethnicity or gender,” he says. “Especially in leadership positions. There aren’t nearly as many minorities and women as I’d like to see. It’s important for me to show that it’s possible for them to get in and to advance.”

Still new to the job and recently married, Smith has to be prudent with his time, but is active with Sponsors for Educational Opportunity, a nonprofit that provides educational and career programs to students from underserved communities. Smith, himself an alum of SEO’s corporate law program, counts himself lucky to have had mentors and friends such as former Learfield Chief Operating Officer Marc Jenkins, new XFL Commissioner Oliver Luck and Big 12 Commissioner Bob Bowlsby, who have each provided him invaluable guidance.

“My playing days ended a long time ago,” he says. “But I was always interested in sports, not just on the field, but on the business side as well. I was intrigued by what went on behind the scenes and wanted to pursue it.”

He’s now behind the scenes, knows the score and would like to help others get in the game. 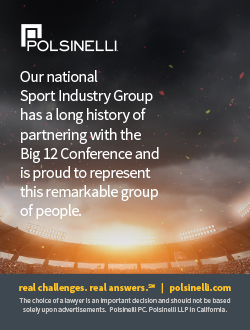