For Blue Bell, he could go home again

In retrospect, Doug Martin wonders why it took some persuasion for him to accept the position. Texas-born and bred, Martin so craved the locally produced Blue Bell Creameries ice cream that he’d arrange for half-gallons to be sent to the faraway places where life and career took him. Besides, its headquarters is in Brenham, the epitome of a small Texas town; one iconic Blue Bell commercial reminds that “even the cows think Brenham is Heaven.” 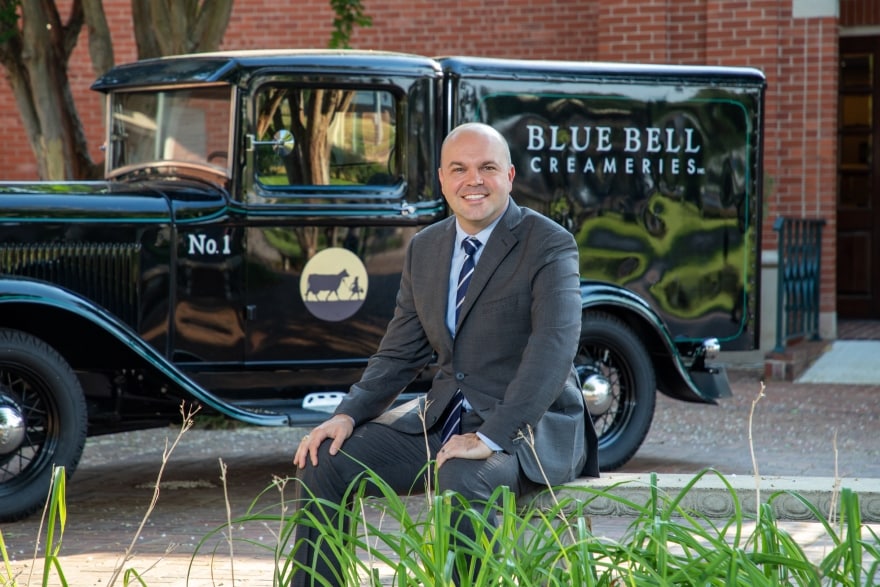 So why wouldn’t Martin jump at the chance in late 2020 to be its general counsel and vice president of compliance?

“It was just such a big move,” he tells Vanguard in March after a year and couple months into the job. “Besides, everything was going so well for my wife and me in D.C.”

Yes, the Martins seemed blessed on all counts in the nation’s capital, he investigating and litigating white collar and fraud as a senior associate at Hogan Lovells while Elyse—a non-Texan whom he met at New York University School of Law—immersed in sanctions and regulatory affairs at Treasury. At home was a 4-year-old daughter and a 1-year-old son.

But Ricky Dickson, Blue Bell Creameries’ president and chief executive officer, is a persistent sort. To Dickson, Martin’s rather limited time in private law—he had only been at the firm since 2016—was a non-factor. After all, Martin’s prior lawyering was on behalf of the U.S. Marine Corps and that meant something. So did his years before going into the service.

Between his 2005 graduation from Texas A&M University and his 2008 enrolling in law school, Martin had taught English and social studies at an under-resourced middle school in Los Angeles. A couple years later, as a law student, he had spent a summer in Kathmandu advocating for constitutional issues and drafting language for the Nepali constitution.

Such a varied background made Martin a fit for Blue Bell culture, Dickson assured, and there’d never be a boring day.

For whom the Blue Bell tolls

“It has been interesting because it’s been so diverse,” Martin says from Brenham, about 70 miles northwest of Houston. “Everything from helping negotiate sponsorships with sports teams, like AT&T stadium where the Dallas Cowboys play, to construction contracts related to our expansion and resolving—amicably—disputes with our business partners and personnel.”

There’s also been the re-establishing of Blue Bell products in the Las Vegas market. 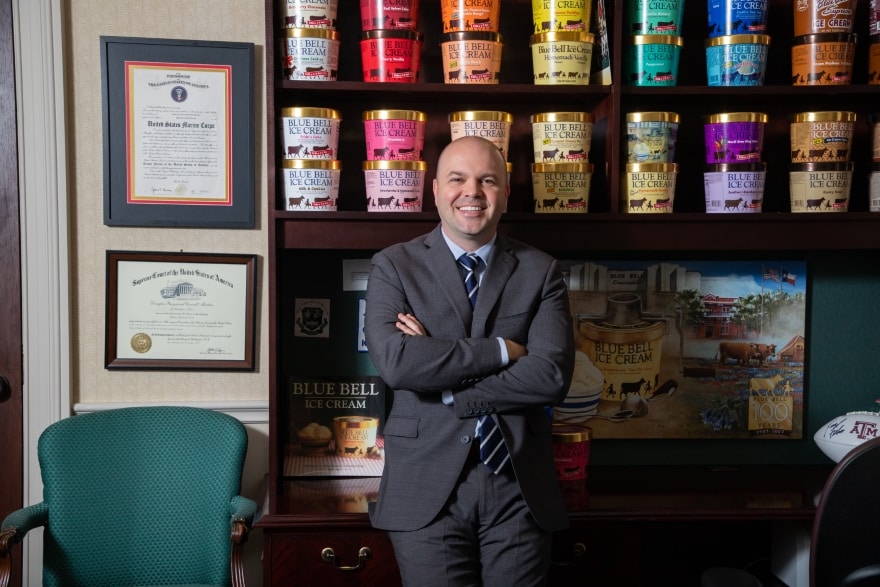 In March, a 14,000-square-foot distribution facility opened in the Las Vegas suburb of Henderson, with Martin fine-tuning contracting with the builders and weighing in on permitting. The bulk of manufacturing, however, is still done in Brenham with the rest in Broken Arrow, Oklahoma, and Sylacauga, Alabama. Thus, the frozen treats must be transported via refrigerated trucks and often through sun-scorched terrain.

Safety is all important at Blue Bell, with Martin overseeing a department specifically for that purpose, as well as others for quality control and quality assurance. He’s also vice president of compliance, too.

“We have a very dedicated view of compliance and food and worker safety,” he says. “We also use outside counsel to bolster our legal and compliance programs.”

While he’s a legal department of one, Martin doesn’t expect it to stay that way. Blue Bell prefers to handle as many matters in-house as is practically possible, but does call upon some outside firms. His former colleagues at Hogan Lovells occasionally assist on food regulatory issues while another firm, Kelly Hart, handles corporate matters, employment and intellectual properties. Blue Bell not wanting its creative flavors to be copies, IP obviously is of much concern. The goal is to have seamless communication between Blue Bell and its outside partners.

“As a lawyer speaking to lawyers, I can translate their counsel better than someone who doesn’t speak legalese,” he says. “It also reduces the legal bills.”

Still, Martin is under no pressure from Dickson to focus just on legal and compliance. No stay-in-your-lane culture here, he says.

And as for the CEO and president, he worked over four decades at Blue Bell, Dickson having begun his tenure as a sales rep before the now 39-year-old Martin was born. According to Martin, not only is Dickson young at heart, he also has a knack for identifying talent and character. Apparently he saw it in Martin, whose Marine service took him to places like Quantico, Guantanamo and Latvia.

“Serving my country has been a great honor and the Marine Corps ethos and values are very important to me,” Martin says.

Not quite on the job for a year and a half when he spoke with Vanguard, Martin seems to have enough of a grasp on the Blue Bell operations. The rest of the family also has taken well to Texas, with Elyse settling into a senior counsel’s role at the Houston affiliate of Akin Gump Strauss Hauer & Feld, an international firm co-founded by the late Washington power broker Robert Strauss.

But inquiring minds want to know: What is Martin’s favorite Blue Bell flavor?

“It was Pecan Pralines ‘n Cream but I’m not sure it still is,” he says. “It might be Peachy Peach or Chocolate Peanut Butter Overload. We debut new flavors every year so my answer might change.” 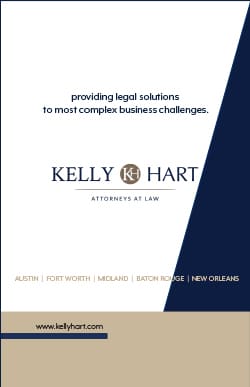