When overseeing compliance for a tech-centric financial firm—one with technology forward processes that have yet to be specifically addressed in the rulebooks—understanding the regulatory landscape is paramount.

Luckily, Michael Sanocki has scaled that terrain many times before, having served in the Office of Compliance Inspections and Examinations Chief Counsel’s Office at the U.S. Securities and Exchange Commission (SEC) and the International Securities Exchange’s (ISE) Legal Department. Now, as chief compliance officer and general counsel for Volant Trading, Sanocki is leveraging that knowledge to keep his employer on the cutting edge—and in the good graces of regulators.

“Many of the rules promulgated by the SEC and Financial Industry Regulatory Authority (FINRA) were written years ago, before a lot of this technology came out,” Sanocki explains. “So compliance is extremely important. You can be ahead of the curve, but every step forward has to be careful and accounted for.”

Founded in 2006, Volant quickly emerged as a leader in financial technology (better known as fintech): programs and platforms that use big data; hardware; and algorithms to create a faster, more dynamic trading of stocks, options, futures, and so on. Since joining the New York-based firm in 2016, Sanocki has worked to ensure those tools pass regulatory muster.

“We have to make sure we have an appropriate justification for moving forward with certain trading strategies or systems that don’t fall clearly into a single regulatory framework,” Sanocki explains. “So it’s really important that compliance works closely with the traders and developers and has everyone on the same page.”

For example, the rules are somewhat nebulous when it comes to a new system’s functionality, particularly with respect to the exchange’s own system. Often, the firm will become aware of unusual events based simply on the firm’s trading on an exchange.

When the firm believes it may have found an aberration in exchange microstructure, Sanocki will reach out to the exchange directly to discuss the firm’s observations, ensuring they’re aware of potential abnormalities, which can affect market participants.

“I think these inquiries put us in the regulator’s good graces. The call gets the exchange thinking about how to improve its own systems or rules,” Sanocki says. “There have been times where my calls result in a published regulatory notice to all exchange members, which goes to show that you can’t take anything for granted. If you have a question or concern, you have to make it known.”

In some cases, Sanocki will be asked—usually by FINRA—to provide documentation describing what procedures Volant has in place to prevent certain rule violations, including those pertaining to the market access rule, market manipulation rules, as well as more nebulous catch-all provisions.

In addition, Volant must submit to annual exams by FINRA (or its designated examination authority), wherein regulators take a deep dive into the firm’s procedures to ensure full compliance with their regulations—a process Sanocki oversees.

“Having been on the other side of that equation, when I was with the SEC and the ISE, I knew what to expect,” Sanocki reflects. “But I also knew that there was no margin for error when protecting the public. Today the repercussions hit closer to home because they can include large monetary fines for Volant or even personal liability for another employee or me.” 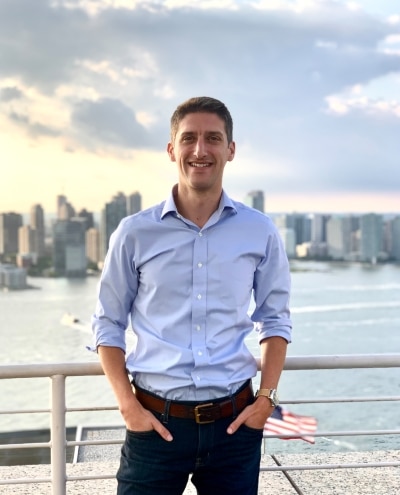 “More broadly,” Sanocki says, “navigating foreign markets is challenging because the rules are in their infancy compared to those in the U.S. where the laws have been more rigorously interpreted by the judiciary system and the regulators.”

His solution: Use the same, stricter standards of compliance Volant uses at home to ensure the firm is on the safe side.

“There are always growing pains when you’re dealing with a new market, because the culture of compliance can be so much different,” Sanocki says. “But we’re getting there, and it’s only helping us maintain a strong compliance posture here at home.”

It’s a posture that Sanocki has worked hard to strengthen since joining Volant in 2016.

About 10 years ago, before the most recent regulatory ramp-up, Volant’s regulatory procedures covered just 10 pages. By 2017, Sanocki and his team had fleshed it out to more than 500 across Volant’s different business lines and entities. The team added everything from detailed test cases and procedures to specific, step-by-step instructions on how to report potential wrongdoing on the part of customers using the firm’s execution platform.

According to Sanocki, the new procedures also serve as an accompanying instruction for reviewing Volant’s surveillance system and other daily, monthly or annual reviews. Whenever a supervisory review is required, an email is automatically sent to the relevant trader or operations personnel complete with an ID number that corresponds to specific passages in the manual.

Sanocki has also built a dashboard to track down any employee who has outstanding reviews to complete. Now, whenever FINRA requests confirmation that the firm is conducting regular reviews, he can be confident all supervisory reviews have been completed.

In addition, Sanocki implemented more restrictive confidentiality agreements to better protect Volant’s intellectual property portfolio. He also works closely with the company’s CIO to create more robust development, IP and cybersecurity policies. The firm can identify anyone who’s touched an individual area of code and is better protected from internal or external threats.

“None of this would’ve been possible without a great internal team and a lot of collaboration, both within the company and with our trusted outside counsel,” Sanocki says. “Compliance isn’t just a buzzword for us. It’s part of our culture. And that culture is made up of a lot of incredibly smart and responsible people.” 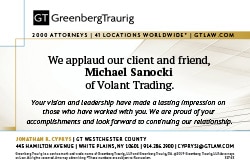