When Otis Carter, general counsel for TriMark USA LLC, made plans to have dinner with friends in Chicago, they asked if he might be able to get a reservation at Duck Duck Goat, a new restaurant opened by Stephanie Izard—the first female chef to win the Bravo television show Top Chef. As it turned out, Izard was a long-time customer of one of TriMark’s largest divisions, TriMark Marlinn, and getting a table on short notice was no problem.

“One of the really interesting aspects of this job is going out to a restaurant that’s a customer and seeing all of the work that went into the design of the restaurant, and seeing how we contributed to it,” Carter says. 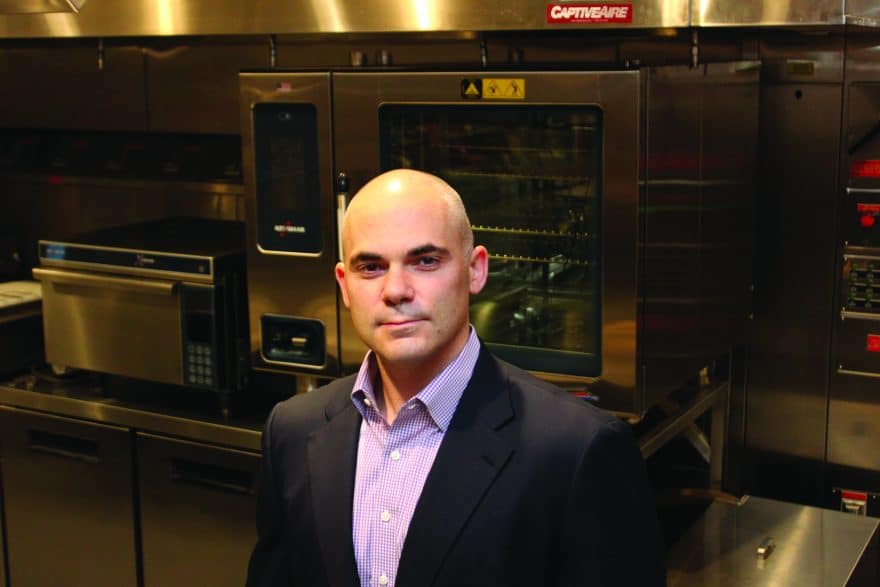 Founded in 1947, TriMark has grown from a small, Rhode Island-based foodservice equipment distributor into the world’s largest provider of foodservice equipment, supplies and design services, with revenue approaching $1.5 billion. TriMark distributes all of the non-food products required to open and run a foodservice operation, along with services ranging from kitchen design and project management to equipment leasing and service.

It serves chain and independent restaurants, as well as healthcare, education and government customers.

What’s equally impressive is that Carter is the company’s first and only in-house counsel. That’s generally unheard of for a company of TriMark’s size—2,400 employees—and global reach—43 locations, with customers around the globe.

From law firm to general counsel

Prior to joining TriMark as General Counsel in 2014, Carter spent 10 years as a private equity lawyer with firms like Kirkland & Ellis LLP and Ropes & Gray LLP, representing private equity funds such as Bain Capital, TPG Capital and TriMark’s former owner Audax Group on mergers and acquisitions and other strategic transactions.

“TriMark has been private equity-owned since 1998, and since that time the company has grown dramatically, both organically and through acquisition, which fit my background nicely,” Carter says. “Under our current ownership, Warburg Pincus, that growth has only accelerated.”

In his new role, Carter’s responsibilities have also grown and now include corporate governance, executive compensation, labor and employment, litigation and commercial contracts.

“It was like drinking out of a fire hose when I first started,” Carter says. “My role hadn’t previously existed, so there was no real blue print, but it allowed me some freedom to define the role.”

“One of the initial challenges was getting buy-in from the business teams and helping them to understand that I’m on their team; I’m not here to tell them they can’t do things,” he says. “I’m here to be a resource for improving the way they do business.”

While he’s currently a one-person legal department, he is not without good counsel.

“Littler Mendelson P.C. is our outside counsel for labor and employment matters. With facilities in 15 different states, we’re lucky in that Littler has an office and an assigned partner relationship in each one, which helps us stay on top of changes in state laws. They do a fantastic job,” Carter says.

“For M&A work, we’ve used Ken Chow at Ropes & Gray and Jai Agrawal and Chuck Fellers at Kirkland & Ellis, two firms that I have tremendous respect for and who played very important roles in my development as a lawyer,” Carter says. “We have also relied on Mike Mano at Proskauer Rose LLP, most recently in connection with Warburg’s acquisition of TriMark. Mike is an excellent young private equity and M&A lawyer.”

For litigation, TriMark turns to Kyle Reeb at Porter Hedges LLP in Houston. “Kyle is my go-to for litigation. He’s tenacious and high energy, but very practical,” Carter says.

Finally, TriMark relies on Morgan, Lewis & Bockius for union and pension plan issues. “Amy Kelly, Ross Freedman and Randy McGeorge—they’re great,” he says. “I’ve worked with them on a number of transactions and am constantly impressed by their knowledge of the issues and responsiveness.”

An affinity for acquisitions

What keeps Carter energized is his affinity for mergers and acquisitions, and TriMark has completed a number of them— 12 in the past 15 years.

“We’re very active on the acquisitions side, which allows me to use a lot of the skills I developed at Kirkland and Ropes,” he says. “And because we have a small executive team, I take a very active role in the negotiation, execution and integration of new acquisitions.”

“We acquired two very well-respected, well-run companies who were the leaders in their respective regions—Adams-Burch in the Mid-Atlantic and R.W. Smith in Southern California—further expanding TriMark’s national footprint,” Carter says.

When Carter isn’t working, he’s helping shuttle his three sons—all under the age of nine— between Cub Scouts, hockey, baseball, lacrosse or soccer.

“We spend a significant amount of time freezing our faces off in hockey rinks, even during the summer,” Carter says.

Remarkably, he still finds time to train for endurance and adventure races, such as GoRuck and Tough Mudder, as well as experiment in the kitchen.

“I like to go to restaurants with open kitchens, which allows us to see chefs in action. Seeing chefs flying around like that—those guys are pros,” he says. “It’s a good reminder of how difficult the restaurant business is and how much our customers depend on us. We have to deliver.”