Thaíza Cançado was just 24 years old when she took on her first leadership role as a lawyer and ombudsman for Brazil’s Banco Bonsucesso in 2009.

“It was challenge because at the law university they don’t teach you leadership and management,” Cançado says. “So, I trained myself on leadership issues and governance developing those skills.”

Flash forward to 2022, and she’s now executive manager of compliance and regulatory affairs for Inter, a Brazilian company offering both financial and nonfinancial products and services.

Since joining Inter in November 2020, Cançado has spent much of her time helping develop its compliance and integrity program and managing regulatory risks. She’s also worked focused on complying with U.S. Securities and Exchange Commission compliance regulations as it’s traded on the Nasdaq stock exchange.

“In my career, I have taken on leadership roles in legal and compliance while creating processes from scratch,” Cançado says. “The challenge is to support a company in legal, regulatory and compliance matters with a strategic vision while adding real value to the business.”

Inter was founded in 1994 and became the first digital bank in Brazil in 2015.

The company’s “super app” offers customers a free digital account, investment platform, banking services (including debit and credit cards), real estate financing and insurance services. Owing to a partnership with retailers throughout Brazil, the app also provides e-commerce, allowing customers to shop for everything from airline tickets to food and beverages, appliances and pet supplies.

As the company grows, Cançado and her team of about 15 have guided Inter’s compliance through several changes in Brazilian finance and banking laws and regulations. Those have been enacted in the last two years by regulators and self-regulators such as the Brazil Central Bank and Brazil Securities and Exchange Commission.

Ensuring compliance with the financial and banking regulations is right in Cançado’s wheelhouse, owing to years of legal leadership in the banking industry.

She says that transparency, partnership and assertive communication are crucial in ensuring that Inter’s leadership and employees understand the need—and value—of compliance. She and her team use a variety of tools including “simple communication,” visual aids and compliance podcasts to engage and train people.

Still, it’s more than just dictating what compliance measures will be. Cançado’s aim is to work throughout the company’s business areas to find solutions and ensure new products can be introduced compliantly.

“The big challenge for a compliance team is engaging the company and ensuring regulations are followed,” she says. “It is very important that the compliance department is included in the most relevant debates of the company. You make a difference when you engage people to do the right thing, at the same time that you bring value to the business.”

Though Cançado was assigned her first leadership role at a young age, she says she didn’t have a career aspiration until attending college. A native of Belo Horizonte in Brazil, she earned her law degree from Centro Universitário Newton Paiva in 2007.

She built the role by defining the strategy and scope of work and creating processes and procedures to help the bank comply with regulations. Doing so also helped reduce litigation and improve customer relations, she says.

Cançado also earned a postgraduate degree in business management from Fundação Dom Cabral in 2011 before leaving Brazil to study English at the International Language Academy in Vancouver. After earning her certification, she returned to Brazil and Banco Bonsucesso as legal coordinator in 2012.

Cançado also served as president of the strategic legal committee for Amcham-Brazil, the largest American Chamber of Commerce outside the U.S. She currently serves as coordinator of committees at ABBC, the Brazilian Association of Banks and the Order of Attorneys of Brazil, which is the Brazilian bar association.

Away from work, Cançado and her husband are raising two children and she has run two half-marathons.

“I fell in love with my work when I went in-house and had different areas to interact with,” Cançado says. “It is super-important to be an ethical and integrated company. We believe that it guarantees our sustainable growth. It is important for our clients to do business with a company with these values.” 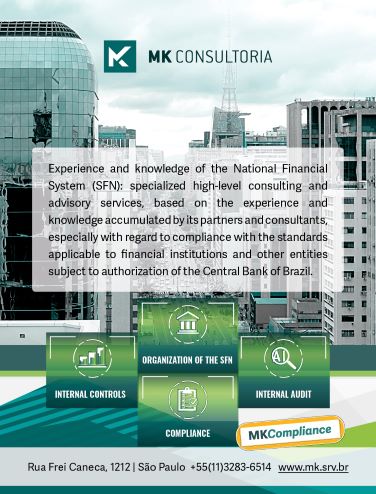