An essential business under any circumstance, the French-headquartered animal health company, Ceva Santé Animale, couldn’t allow COVID-19 to slow its operations two years ago. Whatever direction the pandemic took, people would still be taking care of pets, poultry and livestock.

For Associate General Counsel Tony Strait, it was business as usual at what’s known as Ceva Animal Health on this side of the Atlantic. The same day in March 2020 when a stay-at-home order went into effect at Ceva’s U.S. headquarters in Lenexa, Kansas, he helped finalize his employer’s acquisition of a state-of-the-art veterinary vaccine manufacturing facility in Verona, Wisconsin. 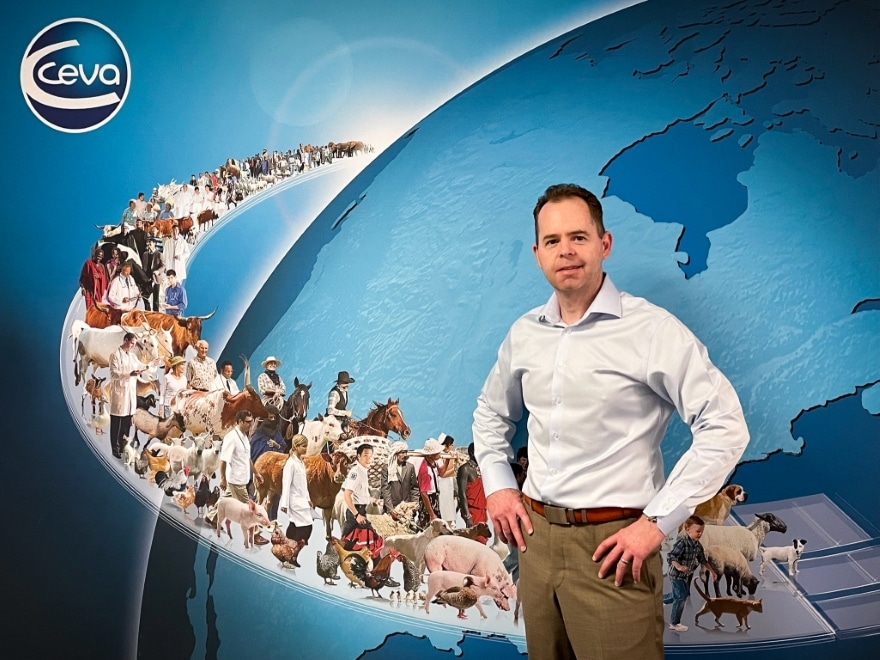 That asset expanding Ceva’s production capacity for swine and poultry custom vaccines, Strait moved on with due diligence of other possible acquisitions, working remotely with the rest of the legal department with scarcely a hiccup.

“Our legal team was able to quickly relocate and continue working uninterrupted from our home offices,” he tells Vanguard in January. “We’ve kept responding to COVID-related legal challenges and have been monitoring changes in legislation, regulations and protocols across our jurisdictions to ensure that Ceva could continue providing essential animal health products uninterrupted.”

Such adjustments have characterized much of Strait’s tenure with Ceva since 2011 and even before when he enabled the company’s Atlantic crossing as a young transactional lawyer and partner with the Kansas City firm of Shook, Hardy & Bacon.

In 2005 Ceva had retained the law firm and Strait’s services for its purchase of Biomune Co. Also based in Lenexa, in the heart of what’s known as the Animal Health Corridor, Biomune expanded Ceva’s vaccine offerings for poultry and created a platform to develop swine vaccines. It also established the company as a livestock industry player in the United States. 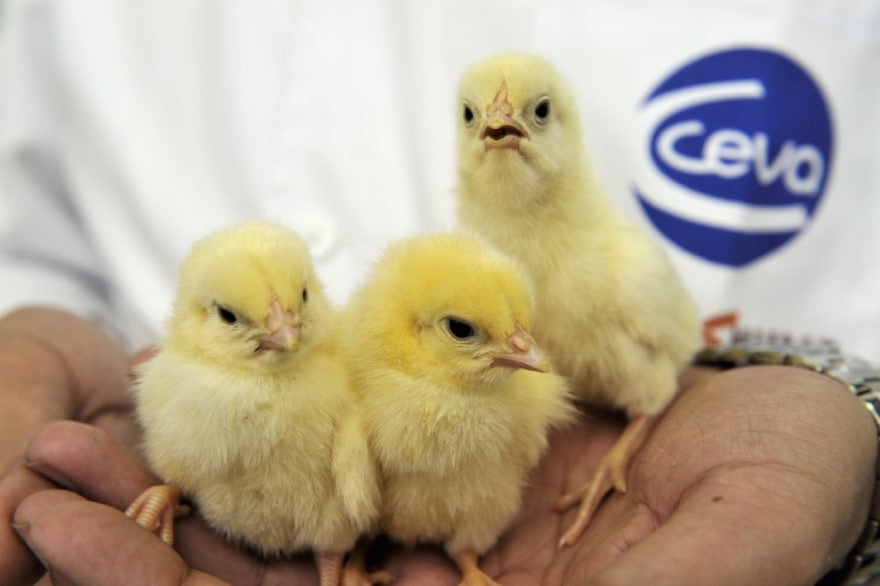 “I was the first Ceva lawyer based outside of France, and I’ve used my skills and experience to build not only the U.S. legal team but also the company’s American operations through acquisitions and licensing deals both in the U.S. and Canada,” he explains.

Among the more recent scores has been the 2019 purchase of Thunderworks, makers of the Thundershirt that, according to the company, has a calming effect on dogs and cats vexed by separation anxiety. Thundershirt’s line of pet-calming products complimented nicely Ceva’s existing line of pheromone products for cats and dogs.

Other transactions may be in play, but Ceva being a private company, Strait keeps the details confidential. It could be a vaccine maker, he says, and there’s likelihood of more licensing agreements. And while transactional law is where he’s made his mark, he has much to do in other areas.

Ceva, with commercial operations in 46 countries and 110 markets, has separated its business into five geographic regions. Initially entrusted with legal and compliance oversight for Ceva’s North America Pacific Region, comprised of the United States, Canada, Australia and New Zealand, Strait was given the additional task in 2020 of providing legal support for commercial operations across all Ceva’s geographic zones.

With this new assignment, he expanded his team to include French and Brazilian lawyers. It’s a complex business model, he says about Ceva selling its products directly and through third-party distributors to protein producers, veterinary clinics and hospitals, and pet owners. The company also supplies vaccines and veterinary pharmaceuticals to government agencies through its veterinary public health initiatives. 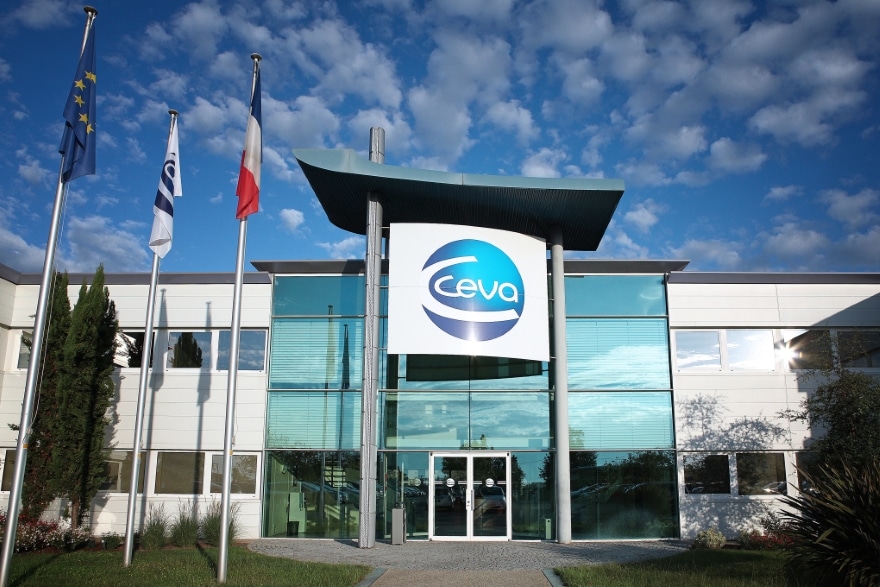 Ceva also operates in a highly regulated industry, one in which animal vaccines and therapies undergo reviews just as stringent as those for people. The U.S. Food and Drug Administration, the U.S. Department of Agriculture and the Environmental Protection Agency are just three of the agencies Ceva must satisfy, and every country where the company operates has its regulatory equivalent.

“We do have a regulatory function separate from legal, but we work with them in ensuring that products are approved and licensed for sale,” Strait says.

Strait is also a member of Ceva’s Ethics and Compliance Committee, having worked closely with Ceva’s global Legal Director, Valérie Mazeaud, on the development and implementation of Ceva’s global ethics and compliance program.

It’s all part of being an in-house lawyer, which is where the University of Iowa College of Law graduate had long thought he’d best be suited. First, however, came that 1998-2006 stretch with Shook, Hardy & Bacon and then nearly five years with Stinson Morrison Hecker, another Kansas City heavyweight where his practice focused on mergers and acquisitions and private equity transactions.

“I always saw myself as a business lawyer or a businessman who specialized in the area of law,” the 49-year-old Strait says. “I greatly enjoy being an integral part of the management decision making that drives the company forward. As in-house counsel, I’m also able to see how these decisions play out over time and contribute to Ceva’s long-term growth.” 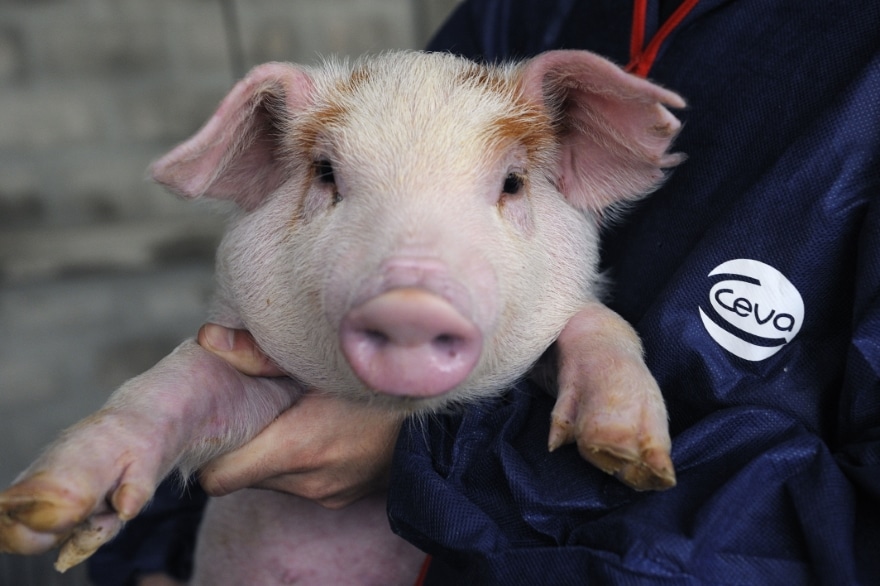 And it’s a most exciting business for which to be part, maybe especially so with a pandemic reminding of the link between human and animal health. The Ceva website explains that around 75 percent of human infectious diseases originate from animals and birds. Zoonoses, as these diseases are called, know no boundaries and Ceva has worked with welfare and social programs worldwide to further its vision of “Together, beyond animal health.”

So, it’s as much a mission as it is a job, says Strait, noting the company’s well-being is so intertwined with the well-being of animals and the people who rely on them. Challenging as that may be, “it’s a very rewarding business in which to play a role.” Strait notes. “People do need their animals.  Our objective is to help satisfy that need.” 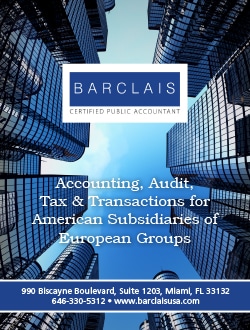 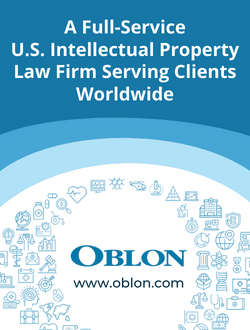