The power of how

Those who know Virginia MacSuibhne understand that she always finds a way—personally or professionally—to get something done.

Despite suffering from endometriosis and Hashimoto’s Disease for years—undergoing seven abdominal surgeries in recent memory, missing a kidney and living with chronic pelvic pain—this high-powered attorney at Roche Molecular Solutions says she’s all about finding a solution—and the right people—when the going gets tough. 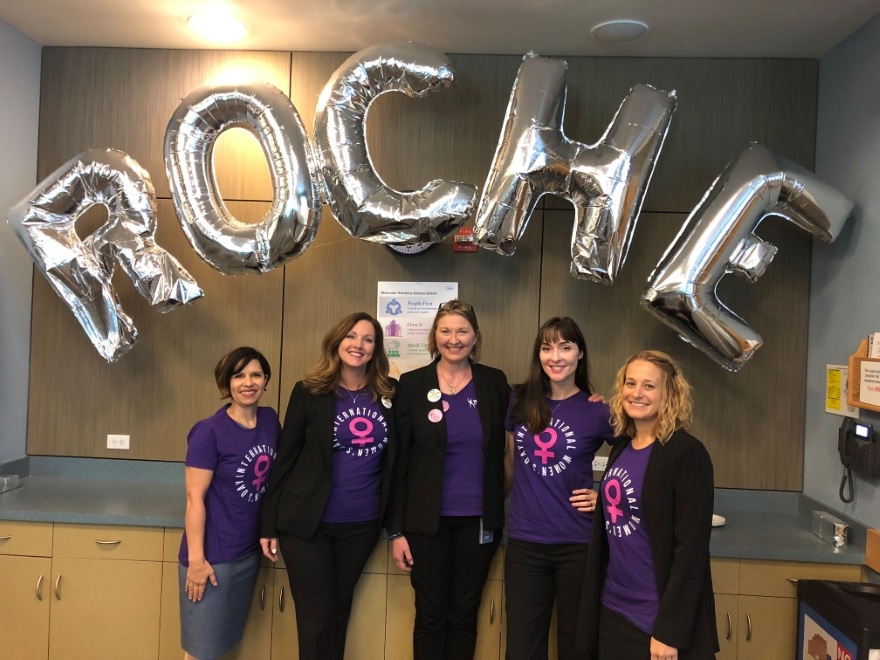 Having been part of Roche in various divisions since 2008, MacSuibhne joined the Pleasanton, California, Roche team in 2017 as chief compliance officer.

She says it was a godsend that she landed in a company with a focus not just on pharmaceuticals and diagnostics, but also on the importance of a supportive environment.

“I feel lucky to work at company with a team that will rally around any team member, pick up the workload and run with it. It is a very powerful experience,” she says of working in a company that has a portfolio in and focus on women’s health initiatives like HPV, cervical, ovarian and breast cancer. “It’s part of the reason I am so passionate about what I do here.”

Compliance, and then some

As MacSuibhne explains, Roche also acquires companies with technologies that are unique compared to those Roche has typically engaged in. 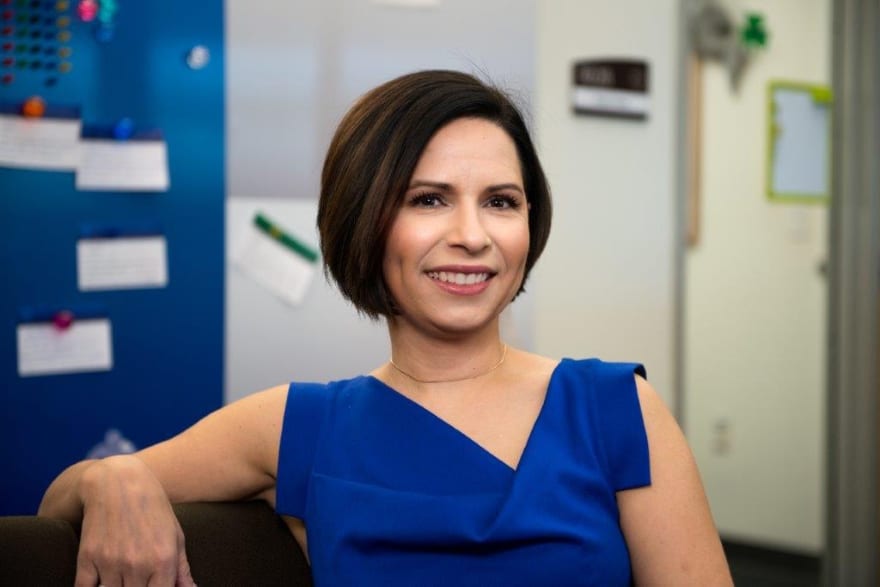 “Often these companies don’t have a compliance program, so the challenge is understanding the scope of the business, applicable regulations and how that differs or aligns with the business we normally conduct,” she says.

Additional compliance complexities also surface with such companies when Roche uses new technologies, like applications, which have a much faster development cycle. She jokes that some seem like they are “created over a weekend” as opposed to Roche’s usual five- to 10-year development cycle.

“My team is particularly interested in ensuring privacy and security are implemented from clinical trials and to testing and beyond,” she says.

When problems do land on her desk, MacSuibhne says she doesn’t come to the situation with an adversarial stance; she hates to say “no” and likes to replace it with the word “how.”

“We’re the flight attendants; if we panic, everyone does. It’s all about problem-solving and setting the tone,” she says.

Team is the tone

An implicit part of that approach is teamwork, which MacSuibhne says often involves people stepping outside their comfort zones to get the work done.

In one instance, a team member had an opportunity to do a year-long rotation with the privacy office in the Basel, Switzerland, headquarters in the midst of the rollout of Europe’s strict data security law, the GDPR, while another team member was on maternity leave. Employees—including those who did not necessarily have a deep privacy background—came together to ensure privacy by design in Roche’s products, and rolled out in-person training to more than 500 people.

“We are all on the same page. I don’t have to come to the table at any meeting here and explain why compliance is important, they know that,” she says. “My job is not to police people, but to make sure they have the tools they need to succeed.”

Her team also responds and reacts to the news at hand.

As an example, she points to the California Consumer Protection Act (CCPA) that was passed in just a week, leaving many businesses to decipher the goals and intentions of the law which has numerous pending amendments.

“We immediately started digging in and comparing and contrasting it with regulations like HIPAA and GDPR and trying to determine implications of the law as written, and then started working with our law firms and industry groups–AdvaMed and IPMPC in particular–for CCPA to create clarity,” MacSuibhne says

Sandee Magliozzi, associate dean for experiential and competency-based learning at Santa Clara University School of Law, says MacSuibhne’s problem-solving ability, dynamic leadership, expertise in compliance and her accessible approach were exactly what they were looking for in an inaugural faculty member for Santa Clara Law’s Master of Legal Studies in Corporate Compliance. This new online program for non-lawyers launched in April and the course, designed by MacSuibhne, will be a fully-fledged offering this fall.

“We wanted the program to be designed and taught by industry experts and she is one of the faculty members who will offer unparalleled insight,” Magliozzi says. “Virginia understands the need for a competency-based, contextualized, collaborative program and we are thrilled to have her working with us to create this innovative program.”

In cultivating her leadership background, MacSuibhne says she was lucky to grow up in a household with philanthropic parents; giving back was second nature to her. As an adult, some of her greatest satisfaction comes from serving on nonprofit boards like Rebuilding Together Peninsula, working with Junior Achievement and the Girl Scouts, and talking to local schools about cybersecurity as part of STEM education.

Practicing law intrigued her, however, from her early days as a trial lawyer before gravitating toward securities and white collar crime, and ultimately compliance. 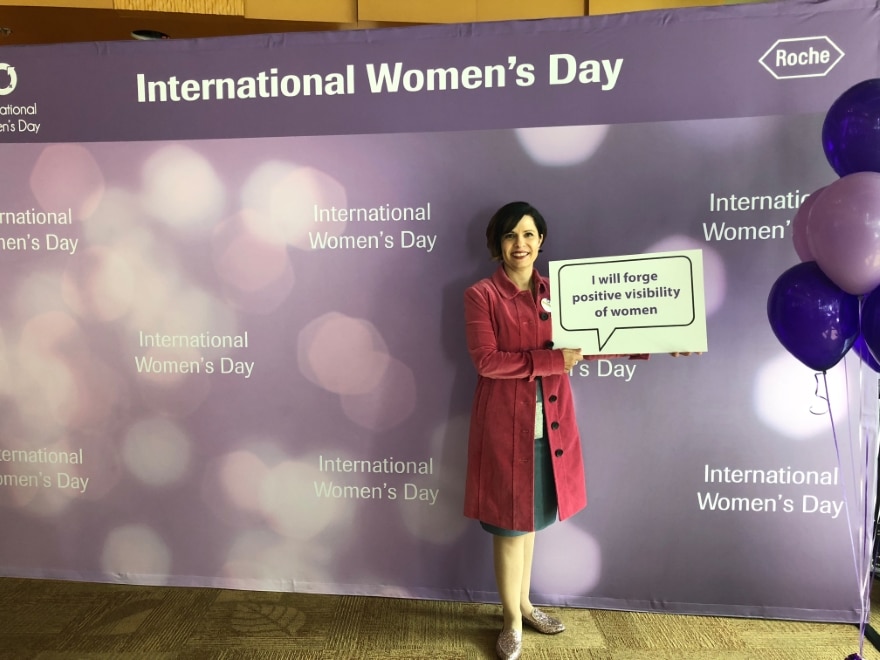 In 2008 MacSuibhne joined the Roche Palo Alto and Roche Molecular Systems Inc. team, working for both entities until closure of the Palo Alto office. She worked as a senior corporate counsel until 2009, moving up to senior director, legal in ethics & compliance at Roche Molecular Systems until 2013 before becoming the chief compliance officer until 2015. While working at Roche she was a consulting expert from 2010 to 2012 and an ethics and compliance consultant at LRN from 2012 to 2016. She then took a job as vice president and general counsel at Ventana Medical Systems, a member of the Roche group, from 2015 to 2017 before landing in her current position in 2017.

Roche, she says, is an organization with people who she knows are there for her, even when she’s not feeling her best. Also comforting to her is relaxing with her English and French bulldogs, or practicing hot yoga to relieve stress.

“I feel lucky to work at company that regularly talks about women’s health. If I am having a flare—which is an invisible aspect of this disease to all—there is really power in sharing the experience and learning to live through the process for me,” MacSuibhne says. 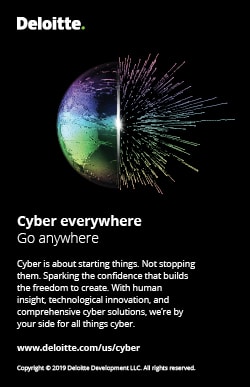 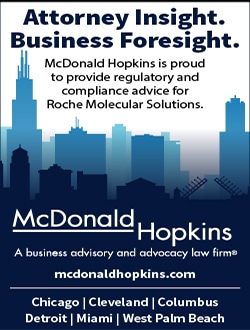 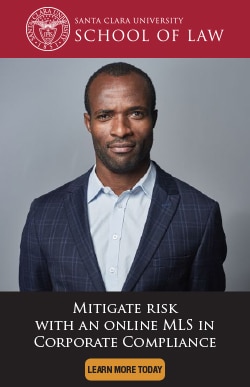