Freeman is all about immersion, designing and delivering live experiences for businesses of all shapes and sizes to evolve their brands, build relationships, and inspire action.

Of equal importance to Repp is who Freeman hires and promotes to make these experiences happen. She was the company’s first general counsel when hired in 2000, and has spent most of the last decade paying her success forward in a program fostering leadership opportunities for women.

See and be seen

Now based in Dallas, Freeman started in Iowa more than 90 years ago as a party rental company, primarily supplying decorations for fraternity parties. The company is still family-owned, but the parties, conventions, events and experiences that Freeman delivers have gotten way bigger, Repp says.

Product launches, fan experiences, employee conferences, and keynote presentations come to life as Freeman’s team of designers draw on data, company experience, and imagination to create impactful experiences for its clients and their audiences.

From Super Bowls to GOP national conventions, Freeman works indoors, outdoors and globally, strategizing on sponsorship, designing exhibits and graphics, and lining up entertainment for trade shows, conferences and conventions, all in a tailored, personalized approach for its clients. The emphasis is on engaging crowds in ways internet marketing can’t– through interactive displays and demonstrations such as immersive game simulations open to fans during large sporting events. The legalities and logistics of such movable festivities fall onto Repp’s plate.

“Human beings are hardwired to take in information through all five senses,” she says. “What you miss online is a shared experience and connecting with people with similar interests.”

For a single event Repp and her team might draft and review contracts, ensure disaster recovery plans are in place and that Freeman is complying with event and local regulations, protecting data for clients, and working with local labor to stage events. Repp says she works with more than 130 unions, and if events are simultaneous, as many as 30,000 union employees may be involved. In the worst-case scenario, she will also deal with any claims made against clients at events.

Jonathan Newton, a partner with Dallas-based Baker McKenzie, says his law firm has worked with Freeman and Repp for at least seven years, largely taking on domestic and international transactional tasks such as acquisitions and mergers.

Freeman, and Repp in particular, impress Newton, he says.

“She really knows her business; Dawnn is very devoted to Freeman and looks for pragmatic business advice,” Newton says. “She is very fair to work with, and from that perspective a real pleasure.”

Newton also praises Repp’s tenacity in getting the answers she needs, tenacity that also plays out as she advocates for diversity in the executive ranks at Freeman and elsewhere.

The roots of Freeman Women’s Development date to a 2011 leadership conference where a former company president went off script in his address and asked all the women attending to stand up. Then he asked all women with more than 15 years’ experience to sit down.

One woman remained standing, Repp recalls, showing a gap in the development of women executives to follow her. In 2012, Repp, and Freeman executives Trisha Frank and Pamela Wills-Ward joined up to create the grassroots Freeman Women’s Development, now known as Freeman Forward.

Repp said she was initially unsure of what she could offer as a mentor in the networking initiative.

“You get a chance to see that leadership is not easy and one size does not fit all,” Repp says. “Sometimes you have to learn to adjust yourself in order to lead.”

While progressing to Freeman Forward, the Freeman Women’s Development program grew into local chapters which are now in place throughout the world with 1,700 members, including many men.

“It is the power of people coming together. It becomes a really awesome training ground for future leaders,” Repp says, adding that Freeman is committed to gender equity in its leadership teams. Led by chair Carrie Freeman Parsons, the 10-member Freeman board of directors is also served by Renée J. Hornbaker, Kelly Zelinsky and Margot Carter.

A graduate of the University of Arizona with a Juris Doctor from the Thomas Jefferson School of Law, Repp is married with three children. Before joining Freeman, she managed litigation for Holmes Murphy & Associates, and was in a private law practice.

She says she found her voice growing up with her father and brothers, but leadership is about more than having a voice.

“I think the best rewards come from being authentic and vulnerable,” she says. “It is much easier to be true to who I am at work and at home.” 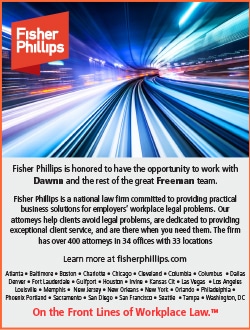 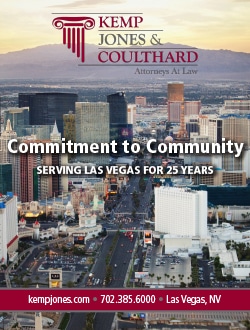 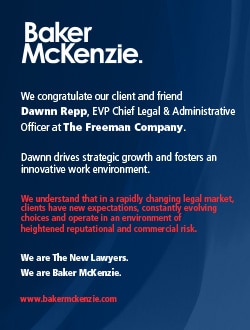