Whole lot of shaking going on here and abroad

Like many young lawyers in firms, Ron Palmese was mindful of his professional growth being limited by having to concentrate on a specific area of practice and thus not being exposed to the big picture for a client.

Much as he enjoyed transactional law, Palmese didn’t feel satisfied enough with his level of involvement in whatever assignment ended up on his desk. Nor might he necessarily come to know the full impact of services he rendered.

So, after toiling for eight years at a couple of blue-chip New York City firms, Mayer Brown and Proskauer Rose, Palmese discretely put out word in late 2010 that he’d entertain in-house possibilities. The more hands on, the better. 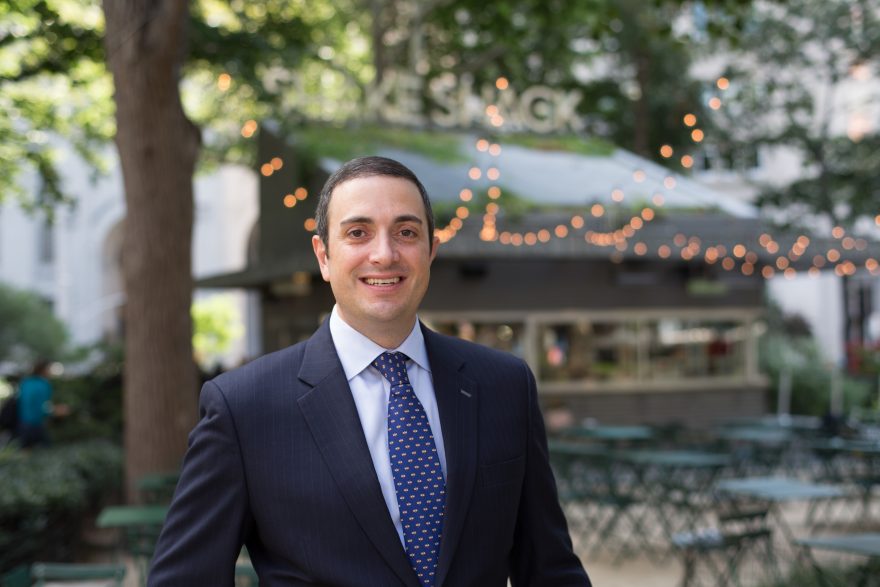 He’s grateful to have received pretty much what he was asking for: The first general counsel position for the Union Square Hospitality Group, which was in the process of founding what’s become a thriving fast casual dining chain.

That’s Shake Shack, which Palmese helped take public in January 2015,  and currently serves as its senior vice president and general counsel. In his role, he oversees and manages all legal affairs for Shake as well as governance, compliance and risk. It’s an operation in which Palmese can keep his hands on—sometimes literally.

“Risk management includes having the highest quality food safety practices, such as ensuring that the hamburgers are cooked at the proper temperature, that we have the appropriate food handling practices and that the Shacks are clean,” Palmese says.

Those humble hands-on duties must be being fulfilled adequately enough, given that Shake Shack has enjoyed three fruitful years on the New York Stock Exchange. The online financial adviser Motley Fool,  even deems it second only to McDonald’s for the best restaurant-chain investment, Shake Shack’s share-value ascending from an IPO price of $21 to as high as $96.75, and recently trading at around $45 per share.

“I got to quarterback the IPO (initial public offering) and it was the most fulfilling professional experience I’ve had and may ever have,” says the energetic Palmese, whose St. John’s University School of Law degree has proved the perfect cap for his undergraduate studies in international business and finance at Georgetown.

“It allowed me to display skills that I ordinarily wouldn’t have the opportunity to do. I managed the IPO timeline and the multiple constituents (banks, lawyers, accountants and tax advisers), led the drafting of the IPO documents, developed policies and guidelines and sought SEC (Securities and Exchange Commission) clearance.”

Palmese’s colleagues at the top of the Shake Shack food chain might voice similar sentiments about their experience in defying the odds to get this far. After all, New York City’s public parks are teeming with hot dog vendors and for one to stand out, it must have been special.

For a few summers in the early 2000s, there was indeed one such vendor at Madison Square Park that regularly drew long lines. It was operated by Danny Meyer, the Union Square Hospitality Group (USHG)  boss who would found what’s now the multinational Shake Shack operation with, at last count, 90 owner-operated U.S. restaurants, as well as 60 foreign outposts stretching from Europe to the Middle East to Asia.  Shake Shack is now run by CEO Randy Garutti who, in the early days, was the director of operations for Meyer’s restaurant group.

Only first its menu would have to expand from hot dogs to burgers, fries and a signature hand-spun shake that gave the operation its name, as it went from vendor cart to a permanent kiosk that drew even more customers. When that operation succeeded, another went up on the Upper West Side followed by one on the Upper East Side. In relatively short order there was one in Miami, and Meyer and Garutti correctly figured that something more than run-of-the-mill fast food seemed at play.

But, whatever it might be, it needed legal and business expertise to sustain its growth. Ideally, some young, enthusiastic, versatile and talented lawyer who could be thrust into any number of roles. All the better if he were part of the target demographic.

The then 32-year-old Palmese, who had found out about the USHG/Shake Shack opportunity through a mentor at Proskauer, seemed to fit the bill. Never mind that he had no in-house experience.

“I’m not a specialist like many of my colleagues were at the firm, with one area of expertise to leverage,” attests Palmese, who likely would have made partner by now had he stayed at Proskauer. “But I’ve got 15 years of experience over varied areas of the law, a tireless work ethic and a love for learning.”

As 2017 neared its end, Shake Shack was in growth mode, with another restaurant planned in St. Louis (Meyer’s hometown) and a careful and evolving strategy to reach most if, not all, major cities and beyond. All that puts a slew of matters on Palmese’s plate.

“One of the main objectives is to sign favorable leases and license agreements,” he explains. “Each lease or license agreement takes time and attention, and requires the right marshalling of resources. And every time another restaurant opens up, the risks we face increase. Is our food being prepared and handled properly? Have we created a safe environment for our employees and guests?  Is the building compliant with the ADA (Americans with Disabilities Act)? Does the team know the relevant laws about serving beer and wine?”

Abroad, Palmese is aware of competitors trying to leverage Shake Shack’s success for their own benefit, opening restaurants with a similar name or logo that doesn’t differ significantly from the one depicting a burger between the words Shake and Shack. Nowadays there’s always something on the intellectual property front burner.

He’s also deeply developing his knowledge of the law.

In December, Palmese and his wife, New York City Law Department Division of Labor trial attorney Jessica Giambrone, were in Washington, where they were being admitted to appear before the U.S. Supreme Court. He acknowledges that the odds of him arguing a matter before the justices are remote. Still it was a thrill to meet seven of the nine: John Roberts, Neil Gorsuch, Ruth Bader Ginsburg, Clarence Thomas, Stephen Breyer, Sonia Sotomayor and Elena Kagan.

“The likelihood of me being there is really low,” says Palmese, who traces some of his legal interest to the long-running “Law & Order” TV show. “Now, I can, and must say I’m admitted to practice in not only New York but also before the U.S. Supreme Court. Even if it never happens, it’s pretty cool.” 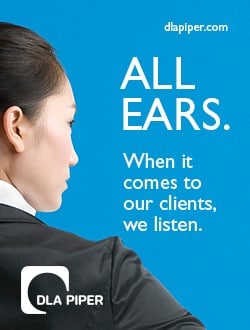 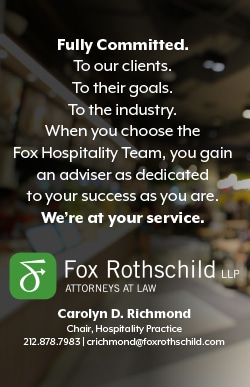 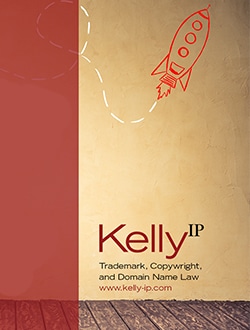 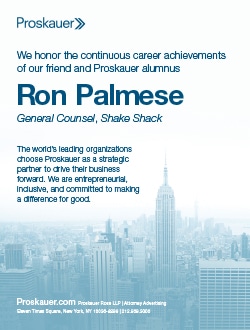