If you were to bet on how many attorneys double as auctioneers, what would be the number? A few dozen? Is it in the hundreds?

As both general counsel and auctioneer for McCurdy Auction LLC of Wichita, Kansas, Ty Patton thinks he may be the only one—at least for a little longer. As he chatted with Vanguard in October, he was preparing for a new opportunity as corporate counsel and director of real estate at Thrive Restaurant Group. 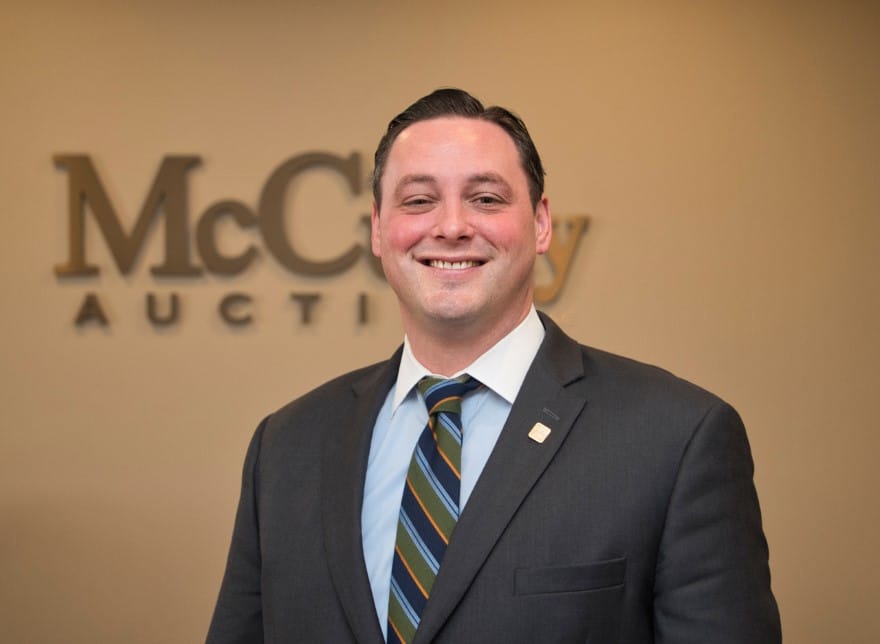 However, he’ll continue as a licensed real estate agent and auctioneer for McCurdy Auction, which gives property sellers an alternative to listing with real estate agents in Kansas, Colorado, Missouri and Oklahoma.

Patton wasn’t an auctioneer when he joined the company in 2015, though. He was hired to build a legal department, to help guide expansion and to help educate sellers and buyers on the advantages of auctions.

Patton graciously avoided using his auctioneering chant while chatting with Vanguard in September, but he can’t hide his passion and enjoyment for it.

“It got me a chance to get out of the office, and that can make you a better general counsel,” Patton says. “Besides, everybody gets a kick out of auctioneers. Once you figure out the chant, it’s kind of infectious. You get the bug.”

Another way to sell

Founded in 1982, McCurdy Auction sells as many as 700 properties annually, according to its website. Founders Lonny and Annette McCurdy began the company in their Wichita home in an area where real estate auctions are more commonplace. 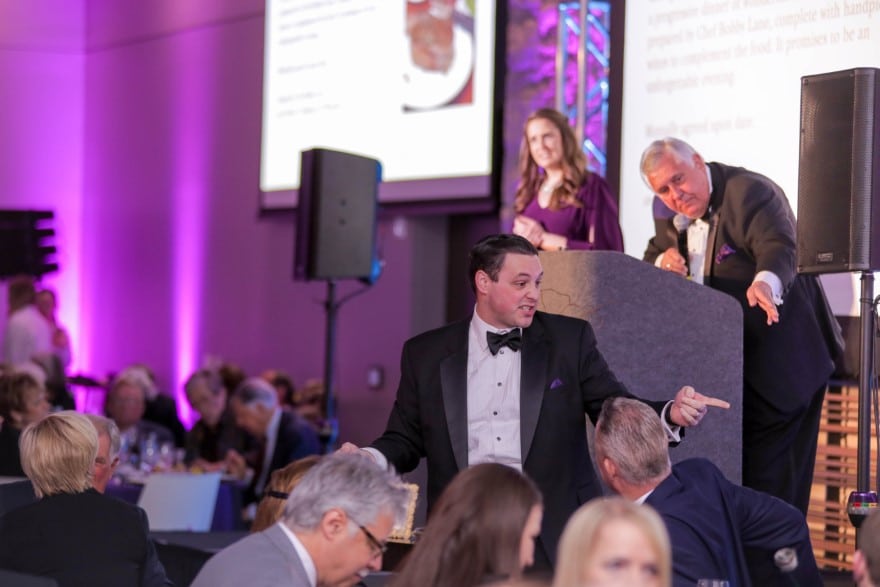 McCurdy Auction isn’t selling foreclosed properties. It’s providing an alternative for willing sellers, especially in a booming market, because it gathers buyers in one place to bid—competition and transparency at its best, because you can see what other people are bidding, Patton says. There’s no waiting to see if a bid is accepted, either, as happens with traditional house buying.

Bidders get due diligence packets that include statements from sellers, as well as appraisals and engineering reports to show the property’s condition. What some bidders don’t realize is they can also inspect properties beforehand and get their own financing for their bids, Patton says.

Though he joined McCurdy Auction to create its legal department and refine sales agreements and operations (including writing an employee handbook), Patton quickly found himself drawn to auctions. He’d seen them when he was younger, mostly for livestock as he grew up in a rural area outside Wichita.

As the company continued to grow, it needed more auctioneers. So, in June 2016, Patton enrolled at the World Wide College of Auctioneering in Mason City, Iowa, in what he calls a 10-day bootcamp.

He developed his auctioneer’s chant by repeating tongue-twisters and other drills while also learning to read a room and see how bidders are reacting. He also learned from the other, experienced auctioneers at McCurdy Auction. 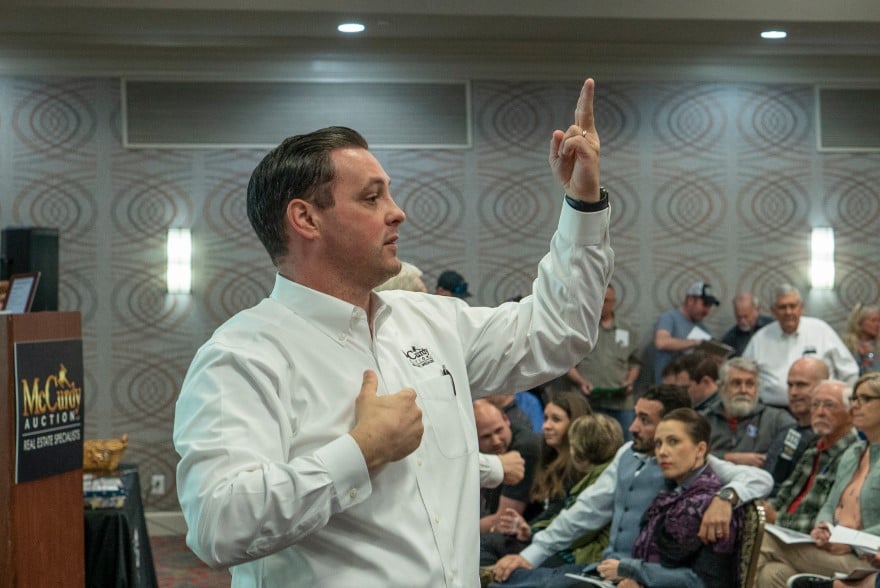 Pre-COVID-19, McCurdy Auction typically auctioned properties in events at hotel meeting rooms, and Patton says he always enjoyed the chance to hit the road and conduct them.

Though the company had begun to simulcast auctions shortly after he arrived and was branching into online auctions, the pandemic forced a virtual change. Patton adjusted terms and conditions for virtual and online auctions, and because the company already had the needed hardware and software in place, it built a basement studio for virtual events.

That trend continues—the only live auctions McCurdy Auction listed on its website in September were in-person charity benefits for Wichita nonprofits. Though the number of auctions continues to grow, Patton says he misses the live events and interactions with bidders.

“It’s an adrenaline shot, but for the right personality, it’s what drives you into becoming an auctioneer,” he says. “In some ways, it’s no different than playing a guitar in front in front of people. You have to get out there … [and] do the thing that’s most advantageous for sellers.”

On the road, on the team

Though Patton has always enjoyed travelling as part of his work, he’s built a career close to home in Wichita.

Growing up, he planned on becoming a teacher and perhaps a football coach. But then, while working toward the bachelor’s degree in history he earned from Emporia State University in 2009, one of his professors urged him to consider a law degree.

Patton earned his J.D. from Washburn University School of Law in 2011 and joined a firm in Topeka, Kansas, which had a focus on community banking and did a lot of work in real estate and bankruptcy law. Just like getting his law degree, he didn’t anticipate this focus, but he says such varied experience is crucial and makes his work more enjoyable. 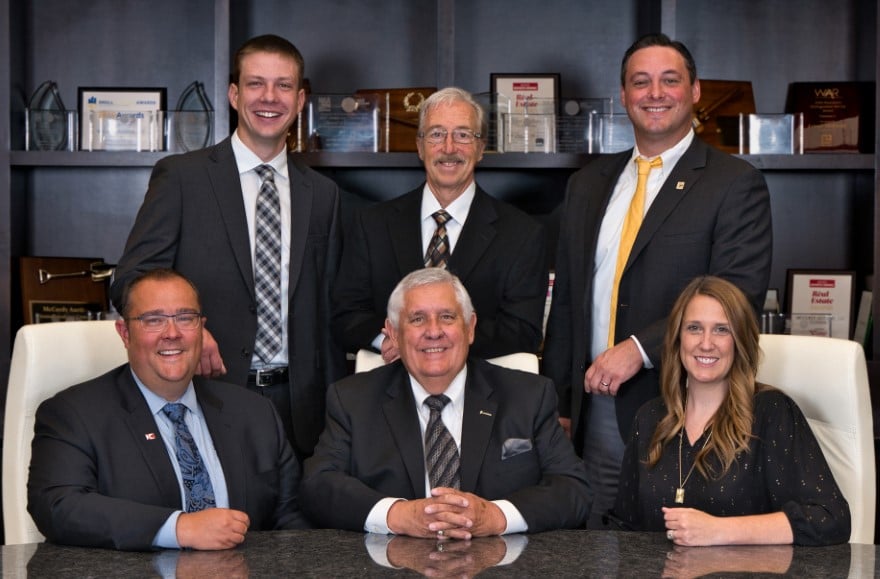 Still, he had a desire to return to the Wichita area where he and his wife grew up and was eager to help McCurdy Auction grow when he joined it in July 2015.

Even with a new opportunity to pursue, Patton says he’s delighted to continue as an auctioneer.

“Going to work for the McCurdys is akin to getting drafted by the Yankees,” Patton says. “You have legends around you and follow their lead.” 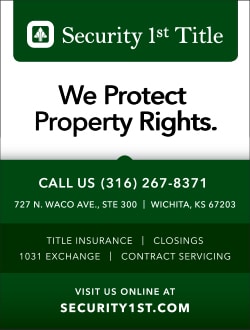