Putting stability back in store

Rumors of the shopping mall’s death may have been exaggerated, Forbes magazine reporting last spring how brick-and-mortar sales have been growing 3 percent each year since 2016, less than e-commerce growth but still above the rate of inflation.

The shrewd mall operators intent on making their premises destination centers, there will be more attractions for the all-important Generation Z. In his long-time role as in-house counsel for Washington Prime Group, Stephen Ifeduba welcomes that trend for the good of his company, as well as its tenants in 102 shopping centers nationwide.

Only now he’s operating on the debtor’s side, WPG having filed for Chapter 11 bankruptcy protection this past June to restructure its corporate debt. It seemed inevitable, Ifeduba explaining that the economic pains of COVID-19 with the pre-existing retail apocalypse have caused many of WPG’s tenants to either reorganize under federal bankruptcy laws or close for good. 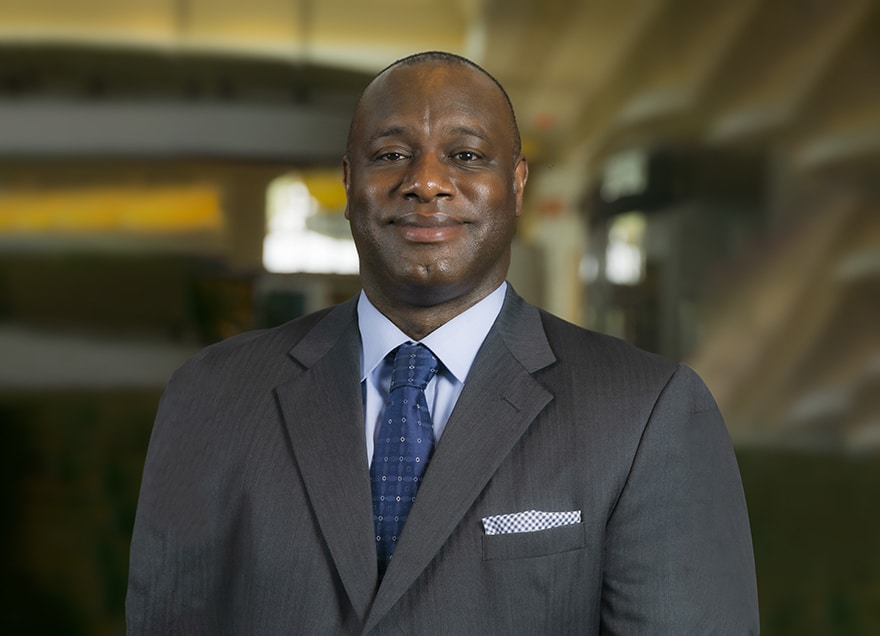 WPG’s interests are best served, he says, by reducing outstanding indebtedness while sustaining business for its tenants. And the company will do what’s practically possible to assist those whose revenues also have been wracked by the double whammy of online shopping and a pandemic.

“It’s kind of ironic,” Ifeduba tells Vanguard in September from WPG’s headquarters in Columbus, Ohio. “Most of my experience was acquired as a creditor dealing with bankrupt tenants and, now, we too are a debtor. I mainly see it from the perspective of troubled tenants navigating their way through difficult times.”

A vice president and corporate and litigation counsel at WPG and its predecessors since 2004, Ifeduba has often honed his skills by dealing with the most difficult situations. The company has had mom-and-pop operations vacating mall space with little or no notice, and now some anchor tenants are following suit.

“We’ll work with them to restructure their lease,” he says. “We understand they’re on the ropes and last year was a record or near-record year for retail bankruptcy filings. It’s a little bit better this year, and the federal money has been the difference in some companies not filing for bankruptcy.”

Not all tenants taking advantage of federal programs, Ifeduba emphasizes how each situation is dealt with subjectively. Tenants who have accessed relief haven’t always survived, and their situations have required daily monitoring. But at least the robust weekly collection and eviction cases have seemingly returned to pre-pandemic levels. The litigation process has eased and, in some cases, streamlined where courts became more accustomed to remote proceedings.

In his bankruptcy docket, Ifeduba has worked with many former retail stalwarts—among them JCPenney, Sears, Ascena and Men’s Wearhouse—in deciding and determining what storefronts to sustain and which to shutter. It might be a years-long process before a tenant stabilizes, and there are times when WPG is at a disadvantage.

“At least when they file Chapter 11, it’s a lifeline to work a deal with our leasing people,” he says. “Otherwise, they might hold the premises hostage. With COVID, the eviction process has been significantly lengthened and delayed due to eviction moratoriums still in place.”

WPG’s footprint stretching coast to coast, Ifeduba oversees outside lawyers handling the company collection docket. His team generally sends a default payment notice. Should there be a bankruptcy filing during the process, he oversees the credit and claims for WPG.

Ifeduba’s responsibilities also include securities and corporate governance matters, such as coordinating board meetings, as well as intellectual property. Prior to its bankruptcy filing and financial restructuring, WPG was a publicly traded company where compliance with the rules and regulations of the Securities and Exchange Commission and New York Stock Exchange was critical. Upon its emergence from Chapter 11 and financial stabilization, WPG will be a privately held company with principal ownership and control held by the investment firm SVP Global.

On the IP side, Ifeduba manages WPG’s intellectual property portfolio, which includes property names and marketing concepts, to ensure that proper federal and state filings are made for trademarks and service marks along with prosecuting infringers.

He’s seen a lot of changes in retail since joining the legal staff of what was known as Glimcher Realty Trust in May 2004. Columbus-based Glimcher was acquired by Washington Prime Group Inc. in January 2015 following its spin-off from Simon Property Group Inc. in May 2014.

“Back then [May 2004], the retailing industry was a mall on plot of real estate anchored by a Macy’s, JCPenney or other department store, and other retailers just came,” he recalls. “You can’t count on that happening anymore. The model has certainly changed.”

But the industry is adapting to new trends and Ifeduba believes brick-and-mortar retail still has relevancy despite recent challenges presented by e-commerce, retail consolidation and the COVID-19 pandemic. He’s also found it fulfilling to have entered the industry 17 years ago despite no direct experience.

A 1994 graduate of the College of Wooster, Ifeduba earned his law degree in 1997 from The Ohio State University and remains a loyal Buckeye. He cut his teeth for nearly four years at the Columbus office of Baker & Hostetler LLP, a Cleveland-based international law firm, before going in-house with Nationwide Insurance from 2001 to 2004.

Just as Nationwide, at the time of Ifeduba’s departure, had more than 200 companies under its umbrella with a publicly traded financial services company, WPG works with hundreds of retailers amongst its town centers and shopping centers in a large corporate structure.

As a direct report to WPG’s Executive Vice President, General Counsel and Corporate Secretary Robert P. Demchak, Ifeduba has the opportunity to see the organization from differing vantage points as opposed to being one of many Nationwide lawyers siloed in one particular practice area. It’s particularly satisfying, Ifeduba says, to resolve an issue to the benefit of Washington Prime Group and one of its tenant partners.

“What I like about my practice is seeing the impact of market forces on the retail and mall industry and affecting it for the better,” he says. “It ties into a nice bow.” 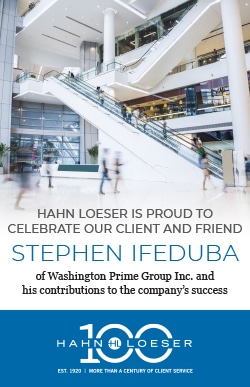