Enlarging a foundation for social and economic progress

Inspiration to pursue a legal career can come from the most unconventional means.

For there was 8-year-old Yasmine S. Murray listening as adults bemoaned how reggae artists in their native St. Lucia were having their music pirated with no recourse.

“That’s when I knew I was going to help people who were being taken advantage of,” the earnest Murray tells Vanguard in January, further explaining that upon moving with her family to the United States in 1992 at the age of 13, how that desire only expanded. 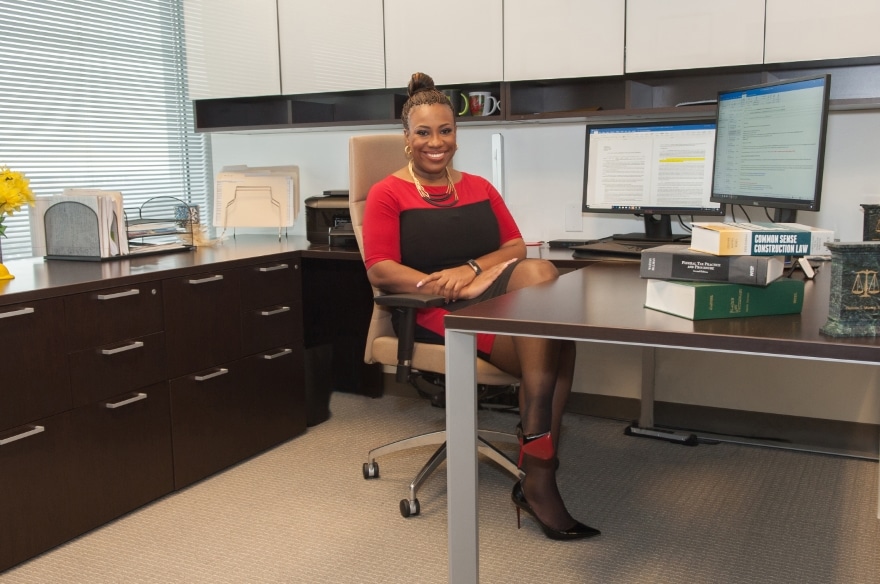 This was music to the ears of her college-educated parents, who had encouraged their precocious daughter to pursue advanced schooling that would culminate with a somewhat belated University of Georgia law degree in 2014. A few months later, she’d settle into an in-house position in Atlanta with H. J. Russell & Company, where she had impressed the crew a few years earlier as a paralegal and assistant corporate secretary.

Since then Murray’s role has expanded to general counsel, executive vice president and corporate secretary, making her a partner to all corporate operations as well as enabling the pursuit of her initial goal to help people—and a community that extends far beyond metro Atlanta.

For her employer, one of the nation’s largest African-American owned construction and property management companies, has long felt a greater obligation than just sustaining a healthy business. It was founded in 1952 by the late Herman J. Russell at the start of the civil rights movement, with affordable housing in Atlanta being its earliest venture.

Hence an ideal home for the very socially conscious Murray.

“To be perfectly honest, my legal responsibilities are actually quite routine,” Murray says. “On a general day-to-day basis, I manage liability and implement policies to do that. But, more importantly, I’m contributing to us being an integral part of our community. Our goal is not just to enter and exit a market anywhere—we want to be part of the fabric.” 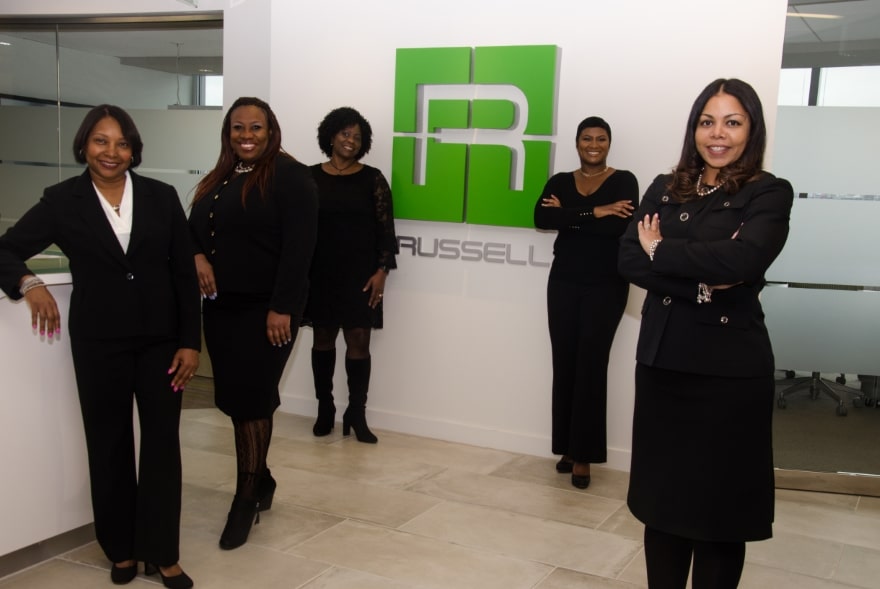 Among the most recent examples, she explains, is Russell’s contribution to significantly increase Atlanta’s water storage by converting the 76-acre Bellwood Quarry site to a reservoir linked by a 1.5-mile tunnel to and from the Hemphill Treatment Plant that draws from the Chattahoochee River. Atlanta now has just a three-day emergency water supply, and this project—anticipated to be complete late this year—should provide a much-needed month’s backup.

As far as Murray’s role is concerned, it might be described as routine enough, the duties involve detail-laden zoning and environmental matters as well as finalizing plans with other contractors. Still, she finds it plenty exciting to participate in and monitor the progress, noting that the city’s water works are long overdue for upgrade, with some systems dating to the late 19th century. This project will surely bring it up to par.

The company’s work can be found all over the so-called Dogwood City, perhaps the most conspicuous being the Atlanta Falcons’ home since 2017, the 75,000-seat Mercedes-Benz Stadium in which Russell provided construction management along with three other contractors in a joint venture partnership—Holder Construction, AECOM Hunt and C.D. Moody Construction. The edge-defying LEED Platinum stadium comprises a retractable roof as well as 360-degree scoreboard and is the most sustainable sports venue in the world.

Prior to Murray’s arrival, H. J. Russell helped build the football team’s previous home, the since-demolished Georgia Dome. The company has also handled some of the renovations of the State Farm Arena, where the Atlanta Hawks play, and had a strong hand in building or upgrading airport and other transit facilities, hospitals, museums, schools and industrial operations not just in Georgia but in other southern states. The company takes special pride in having been among the builders of the Smithsonian Institution’s National Museum of African American History and Culture, and the National Center for Civil and Human Rights.

“We’re as much a part of the community fabric in Dallas, Houston and Washington as we are in Atlanta,” Murray says, adding that Russell has been in numerous joint ventures for public and private projects in Texas’ big urban areas.

With the construction industry booming in the South, Murray says the past year has seen her as more of a business person than general counsel. She now works closely with CEO Michael Russell, the founder’s son, in pursuing initiatives across multiple platforms.

“Michael’s agenda is aggressive and evolving,” Murray says, adding that the son sustains the legacy of the founder, who died in 2014. “He, too, is focused on building communities where people can live, work and play, not just the facilities in which they do it.” 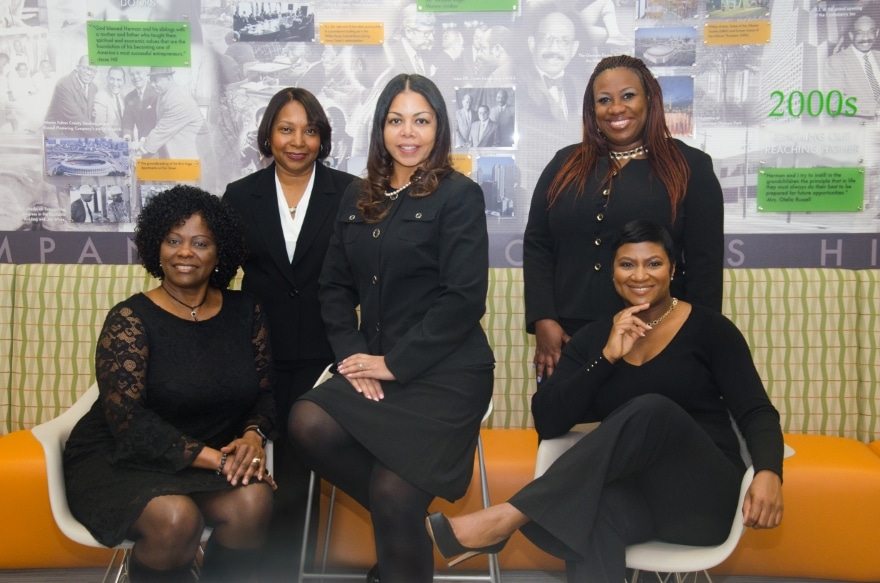 It’s quite rare, she goes on to say, for any company to span generations, and especially so in African-American culture. Successful minority-owned companies usually start from scratch, and that can keep them at a competitive disadvantage. To work at Russell is a badge of honor, Murray believes, and she’s made it a personal cause to empower women and minorities so often absent at executive levels elsewhere.

She and Russell have implemented various initiatives to boost the morale of all hired hands—incentive programs, bonuses, a “Spirit Day” each quarter that might have a seasonal or holiday theme, and the reinstitution of February’s African-American History Month Celebration.

In charge of a team of 10, Murray is proud to not be the only woman in the company brass. Tiffanie Lewis serves as vice president of compliance and information technology, Lonoia Brooks as director of marketing, Delilah Wynn-Brown as director of market-rate real estate, and Elaine Ubakanma as head of human resources. All can serve as role models in an industry that is typically male-dominated.

But flow it did when Murray was in her early 30s. Being at least a few years older than the typical law student may have been extra incentive to excel, and that’s a feeling that hasn’t ebbed.

“I’m constantly growing and learning,” says Murray, now a youthful 40. “With so much going on here, I feel like I’m taking the bar exam every day.” 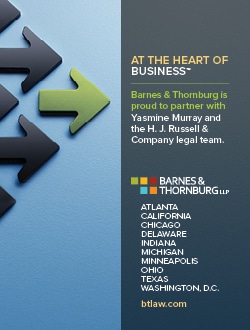