A legacy in every project

It’s all about the fruits of one’s labor outliving the person who created them. So remarks James E. Moye Jr., who has been intent on sustaining multiple legacies since taking over legal responsibilities in 2016 for one of Florida’s construction heavyweights.

There’s the legacy of another family, the extended Murphy clan that’s owned Miami-based Coastal Construction since 1988 and been in the construction industry for over 50 years. As their projects have become more prominent, such as the recently completed Porsche Design Tower and the Four Seasons Hotel at The Surf Club, each stands to be a legacy in the South Florida skyline as well as elsewhere in the Sunshine State.

Just 31, Moye would seem to have his hands full, but says he’s energized for all that legacy sustaining.

“I had quite the head start just growing up around my father,” he tells Vanguard in November. “As I played tennis on the national junior circuit, there were many hours and days of travel time with my father that were filled with construction discussions of all types.”

So much so that construction—not law or tennis—would be Moye’s primary interest upon completion of his undergrad years at Vanderbilt University. There he garnered credentials in engineering science as well as the complementary fields of economics and finance.

But upon graduating in 2010, the stars weren’t quite aligned for opportunities in the big vertical builds that so drew Moye into the profession.

“The market had significantly slowed for condos, hotels and office buildings, so the only real construction opportunities were in heavy civil,” he explains. “Bridges and roadways just didn’t interest me as much.”

But the demand for the other projects would be back, Moye reckoned. So why not go to law school in the interim and pick up skills that would double his marketability at a more opportune time? His father seconding that motion, Moye would earn his law degree in 2014 from the Levin College of Law simultaneously with a Master of Science from the M.E. Rinker, Sr. School of Construction Management, both at the University of Florida.

Having interned in both construction and legal roles as an undergrad and law student further fast-tracked Moye’s career, sparing him what are usually the obligatory years of seasoning at the law firms.

Instead, right after law school he became in-house counsel to the Miami office of Odebrecht USA, an affiliate of a Brazilian conglomerate made up of diversified units in engineering, construction, chemicals and petrochemicals. Two years later, he’d join Coastal Construction as associate general counsel and be mentored by prominent South Florida lawyer Michael E. Utley, who would groom Moye for the top role come 2018.

And high among Utley’s lessons that Moye had heard from his father so many times: The construction industry is precarious, as much high risk as any business sector. In order to be around long enough to build a legacy in construction, one must mitigate the risk with attention to detail and proactive issue resolution. Much of what one does won’t be glamorous, but due diligence keeps one out of court. And that’s most important since, even under the best of conditions, a project can encounter difficulties for reasons beyond anybody’s control.

“Coastal Construction has never been to trial against a client who retained us to build a project,” Moye says. “That’s something not many contractors our size can say. We have a strong desire to keep it this way.”

That too is a legacy which includes minding the details of contracting, meeting and exceeding strict building codes; using new products designed for Florida’s heat, humidity and hurricanes; and navigating the complexities of insurance policies with such trusted strategic partners as the firm of Saxe Doernberger & Vita.

And if there’s an especially tricky matter, the Coastal Construction general counsel can always call upon James E. Moye Sr.

The founder of Moye, O’Brien, Pickert, Dillon & Masterson in the Orlando suburb of Maitland, the senior Moye has been an annual top award recipient since 2004 in Chambers & Partners, The Client’s Guide for construction law. While most of his firm’s clients hail from outside of Florida—some from overseas—it has handled a few matters for Coastal Construction.

The younger Moye could have worked for that firm, but with one of its strong points being construction litigation, he preferred to focus more on the day-to-day of diverse construction issues. There’s certainly a lot of projects pending, and not just on Coastal Construction’s home turf of South Florida.

With the Tampa Bay area becoming one of the hottest markets in Florida, Coastal Construction positioned itself to participate in the Tampa Water Street project, a $3.5 billion development spearheaded by Jeffrey Vinik, owner of the Tampa Bay Lightning hockey team.

In Central Florida, Coastal is also building a Disney hotel in Orlando and a luxury condo on Daytona Beach.

And back home in downtown Miami, this past June nearly 14,000 yards of concrete was poured for another legacy. Sitting atop the foundation will be the Aston Martin Residences. Said to have a “wind sail” design, the hypermodern 817-foot, 66-story luxury high-rise will be the tallest condominium complex south of New York City when completed in 2021.

With 391 units ranging from studios to a three-story 18,800-square-foot-plus penthouse complete with private pool and theater, the project stands to change the Miami skyline. Amenities will include downtown Miami’s only deepwater marina for superyachts. Oh yes, the buyer of the top-of-the-world penthouse will get the last of the 24 Aston Martin Vulcans manufactured—a $3 million vehicle engineered for the racetrack.

Given how legacies appreciate over time, the penthouse and car could be quite a bargain. Same may hold true for the 390 other units, even if they come sans Vulcan.

Also rising high above sea level on Sunny Isles Beach is The Estates at Acqualina, billed as “The World’s Finest Residences,” which will consist of two 50-story luxury condominium towers. Coastal completed the Mansions at Acqualina some years ago, and this is the third project for one of Coastal’s many repeat developer clients.

Just another legacy—and it won’t be the last. 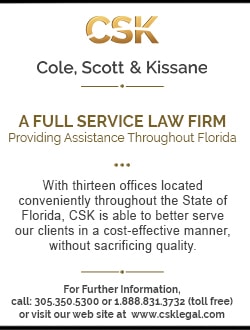 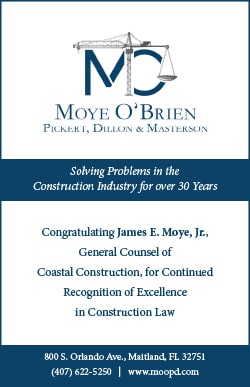 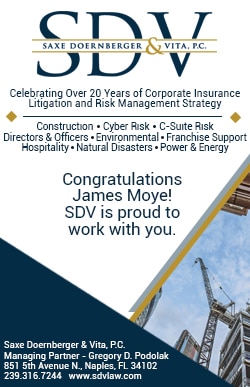