To stabilize an oilfield servicer

He seems prone to understatements mixed with dry humor, “an eventful year” being how Scott C. Weatherholt describes his first anniversary with Weatherford International.

It’s also been a productive year, the Irish-domiciled and Houston-headquartered oilfield servicer having regained stability since emerging from bankruptcy court in December 2019 with $2.7 billion in debt.

That preceded Weatherholt being recruited to join the team in July 2020 as the first executive hired after a management shakeup. As the new executive vice president, general counsel and chief compliance officer, he’d oversee financial restructuring, adhering to rules and regulations at home and abroad, and oversight of a global legal team. 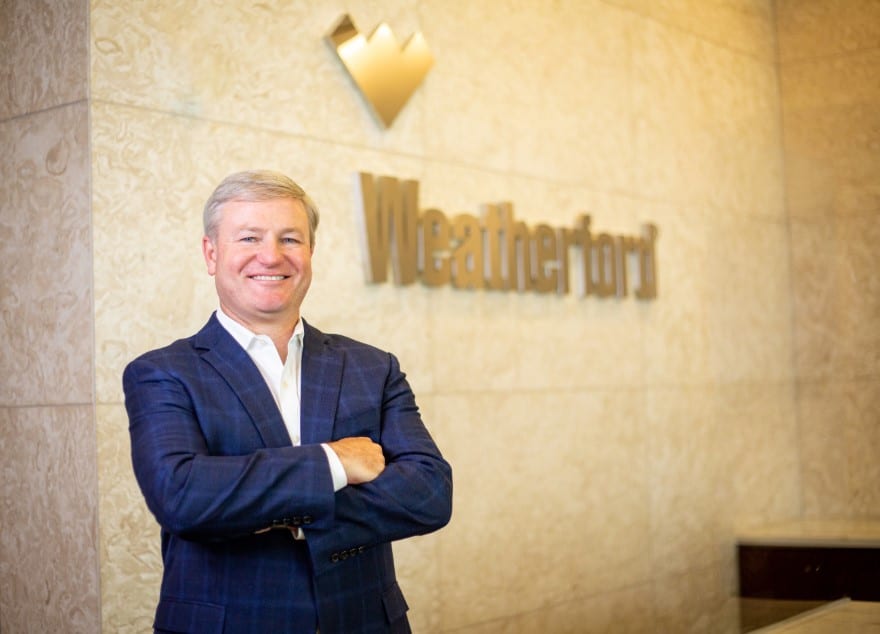 One year later, the veteran energy industry lawyer can point to tangible progress. As he tells Vanguard in July, “we demonstrated the ability to handle complex financial transactions that brought liquidity into the company and let us focus on the business.”

Much credit’s due, he says, to the company’s senior investors who in August 2020 bought $500 million of secured notes that mature on Sept. 1, 2024. Weatherford having the financial flexibility to withstand an unpredictable energy market, according to Weatherholt, it reregistered its stock with the Securities and Exchange Commission and uplisted its shares on the Nasdaq in June. Its recent value of around $16 per share dwarfs its low of $1.70 per share of one year earlier.

“We’re back to running the company in a cost-effective way and delivering proactive solutions to our clients,” says Weatherholt, noting the entire energy industry had been staggered by COVID-19 slashing the demand for gasoline. “Our strategy is paying off.”

On top of everything

Weatherford, noted for assisting the energy industry with exploration and production infrastructure and expertise, maintains operations in 75 countries. Weatherholt oversees around 85 lawyers and support and compliance professionals.

A personable sort, Weatherholt would like to have met at least most of them by now, but the pandemic has limited him to one trip to Dubai. Instead, he’s been hosting global town halls, walking through issues unique to the legal staff and making time for one-on-ones.

“Managing operational risk and ensuring compliance during a pandemic and shutdown required a very nimble legal group,” he says. “But we’ve demonstrated the ability to do that too.” 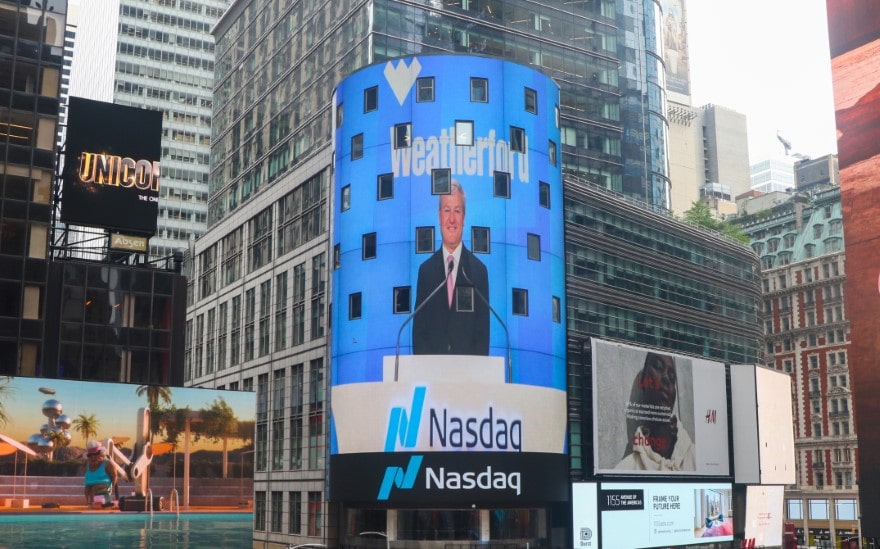 Compliance had become a bigger corporate focus even before his arrival, Weatherford having had issues in its international operations. He says the company’s made strides in this area with its Ethics Ambassador Network which places an observer in each country. Weatherholt, who helps oversee the network, finds such an arrangement preferable to having U.S.-based personnel barking out orders to employees and vendors in foreign lands.

“We’ve put in a robust compliance system and, as we hire new people, we want to make sure that culture of compliance stays at the forefront,” he says, explaining that the ambassadors are often mid-level employees vetted for integrity and industry knowledge. “This ensures people are aware of the policies and procedures, so we don’t run afoul of regimes.”

Shareholder value, he reminds, has increased more than eightfold in the past year and, with the demand and price of oil rising, Weatherholt can take credit for helping to right another distressed energy company.

Energized from the start

Prior to Weatherford, Weatherholt helped navigate three other companies through difficult times. Interestingly enough, it was a contentious case he handled as a young associate at a private firm that put him on the one-way path in-house.

A University of Oklahoma finance major and Class of 2003 law graduate, he logged just a couple years with Tulsa-based Pray Walker, but how pivotal that stint proved in shaping his career.

As Weatherholt explains, he was pursuing a royalty dispute against Samson Resources, a local private oil and natural gas company. The adversarial nature of litigation notwithstanding, Samson’s in-house lawyer—apparently impressed with Weatherholt’s ability to make a case—advised him that the company needed another lawyer, and he should submit a resume.

Weatherholt would spend the next decade there, rising to the role of assistant general counsel responsible for operational, legal, land and regulatory issues across the entire organization, including the petroleum-rich Permian Basin, which covers much of West Texas and Southeast New Mexico. 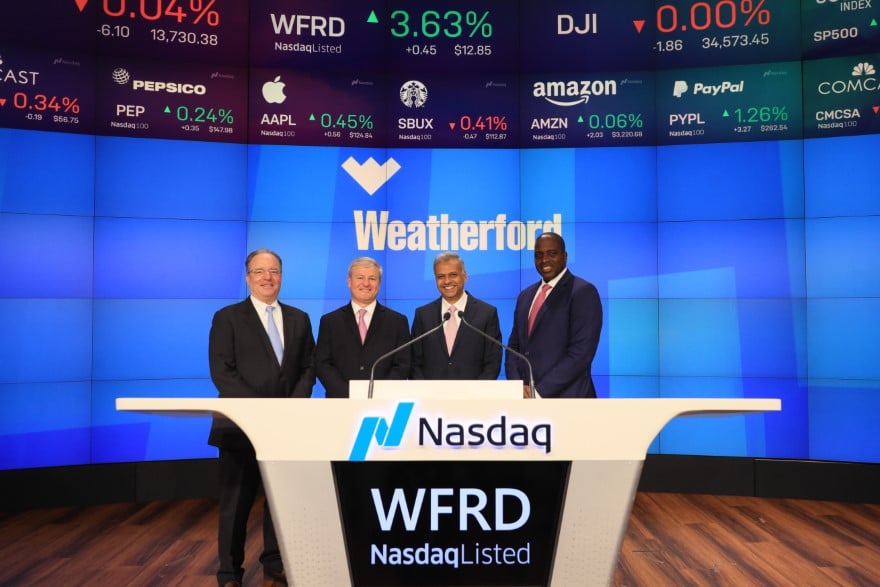 “In the energy industry there’s such a wide variety of work,” Weatherholt says. “Regulatory compliance, litigation, employment law, general corporate—you really experience the broad spectrum of how a company operates.”

In early 2015 he took his skills to another Tulsa operation, Midstates Petroleum Co., for nearly five years, managing legal affairs and providing counsel to the board and senior management. He’d also put his financial creds to oversee a large debt-for-debt recapitalization, a Chapter 11 restructuring and a public-public merger with Amplify Energy.

Weatherholt then moved his family to The Woodlands, Texas, where he was senior vice president and general counsel of Arena Energy, which drills for oil in the Gulf of Mexico. All those roles prepped him for the multinational whose name, save for a few letters, would be identical to Weatherholt’s.

Quite the precarious position, others may have thought when Weatherford was recruiting a new legal boss last year. Only it didn’t seem that way to Weatherholt, who figured that with a new braintrust, the company could overcome its financial issues. The subsequent hirings of President and CEO Girish K. Saligram and Executive Vice President and Chief Financial Officer H. Keith Jennings has added further stability to the company.

And, as Weatherholt notes, there’s something else that never really waned at Weatherford.

“Anyone in the energy industry knows of Weatherford,” he says. “We were struggling with the same problems of other companies, but we’ve since overcome bankruptcy, have a solid management team in place and again are delivering value. Our employees also take pride in working here, and that’s not something a company can buy.” 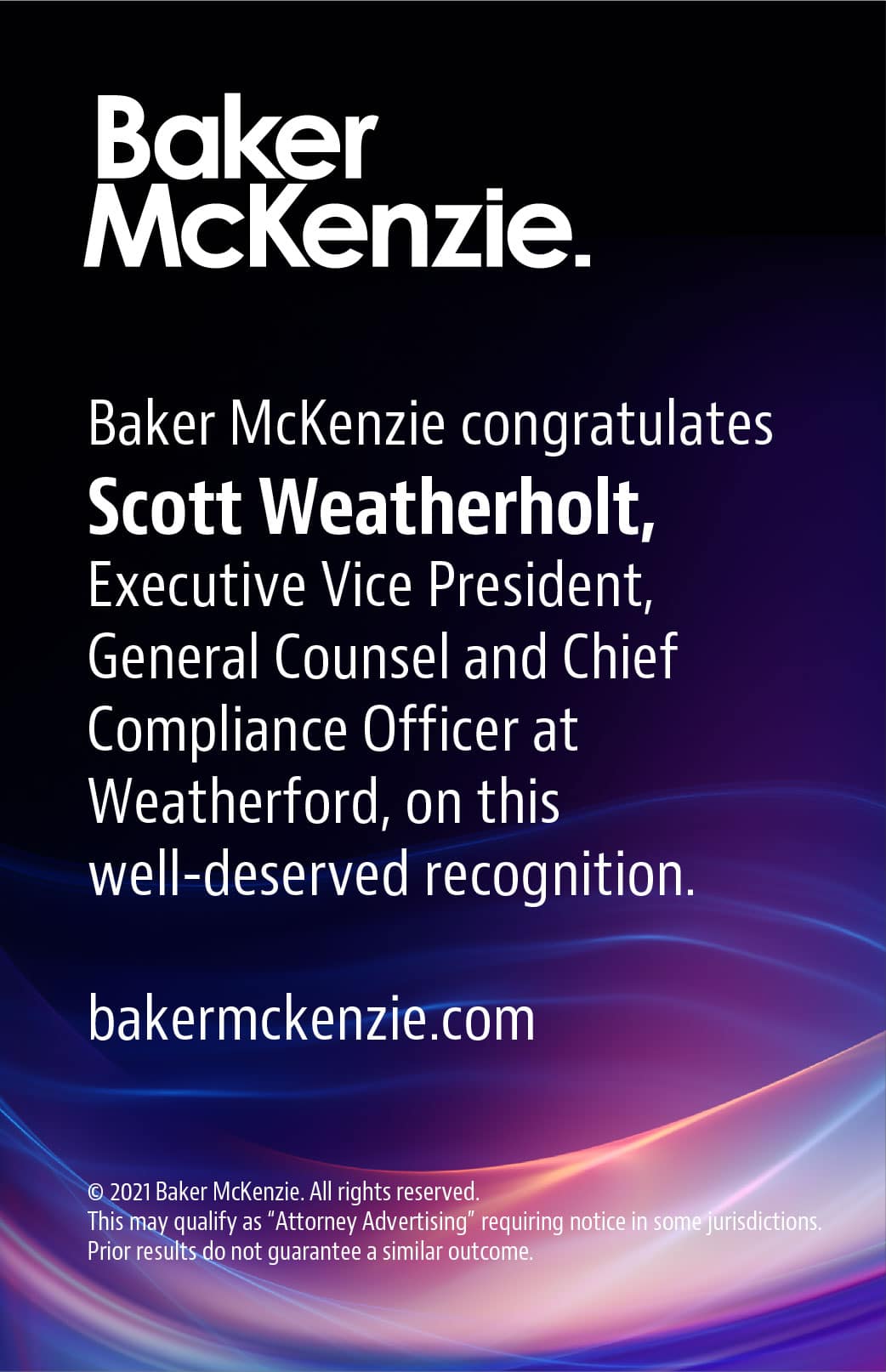 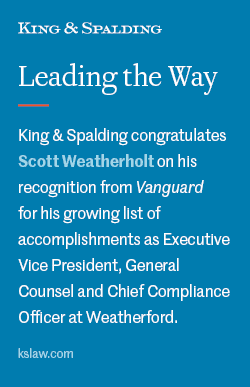