It’s a long way from Alberta’s oil sands-rich prairie to the Texas Gulf Coast refineries and terminals most capable of handling the heavy crude from the north.

Pipelines and railroad are the primary connectors, but both entail risk. Pipelines can burst or spring leaks, and freight trains may derail.

At least the risks are being lowered on the rails since a Houston company, U.S. Development Group LLC, partnered with a bigger Canadian entity to transform heavy crude into a non-flammable and non-hazardous substance called DRUbit™. It’s been produced since late last year at a massive new facility in remote Hardisty, Alberta, and loaded onto railcars for the 2,100-plus mile odyssey to a new receiving terminal in Port Arthur, Texas. 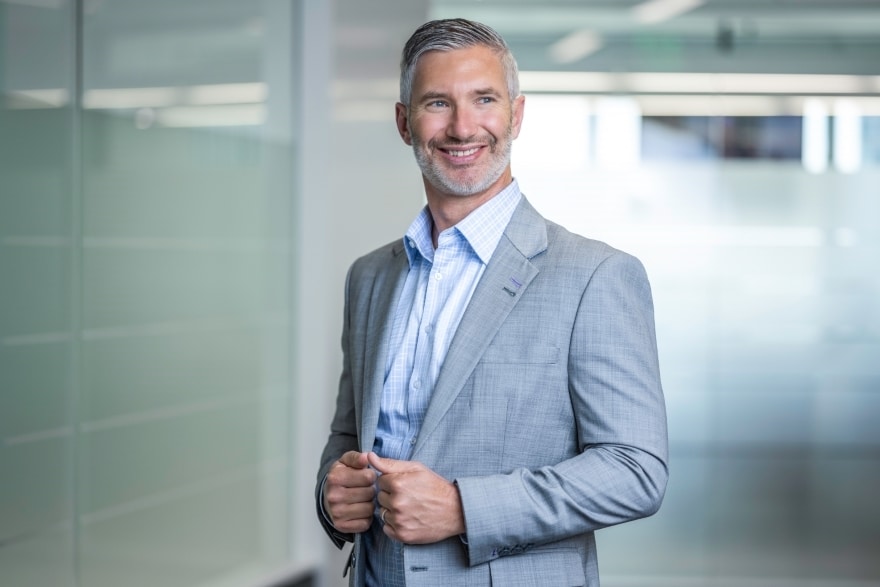 The creation of DRUbit™ is relatively simple in concept but novel in execution. Heavy crude, or bitumen, is extracted from oil sands and blended with lighter petroleum products—diluents—to allow easier flow through pipelines. To create DRUbit™, diluent is removed from the blended bitumen to produce an asphalt-like substance with a safer and higher ignition point. Should there be derailment or spill, the expectation is that DRUbit™ won’t ignite and can be recovered with little or no environmental damage.

More complex were the details that went into USD arranging for this project. First there was a joint venture deal with Calgary-headquartered Gibson Energy Inc., and then underpinning the first phase of the DRUbit network through a decade-long commercial contract with the primary customer, ConocoPhillips Canada.

“A lot of first-of-its-kind concepts for our company went into our partnership with Gibson,” says USD General Counsel Keith Benson, who was deeply involved in negotiating and fine-tuning of conditions on behalf of his employer. “Any 50-50 joint venture is challenging, especially with a larger company like Gibson, but the fact that it’s working is a testament to all the time and effort that went into getting the relationship right.”

Going with the flow

As a midstream company in the energy chain, USD moves oil from production centers to storage terminals and refineries on behalf of ConocoPhillips Canada and other energy industry participants.

Through its partnership with Gibson, Benson says USD has provided a safer, cost-competitive and more environmentally friendly alternative to traditional pipelines and even conventional crude by rail. This is thanks in large part to DRUbit™ not being subject to any of the defined categories of hazardous or flammable materials by U.S. and Canadian transportation regulatory agencies.

The Hardisty Energy Terminal that grew from the USD-Gibson joint venture is adjacent to USD’s rail terminal, where DRUbit™ is loaded onto its customers’ railcars and sent southward to Port Arthur and potentially other destinations at a cost that Benson says is competitive with pipelines while not being subject to the same costs and challenges as building or expanding infrastructure. 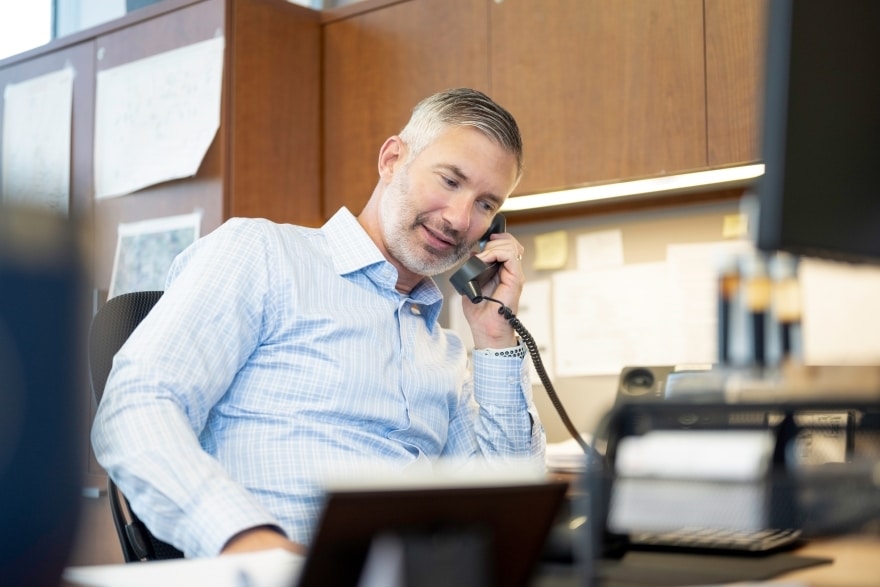 “Shipping costs by rail can be reduced when a hazardous substance is made more benign,” he explains. “The lower environmental and safety risks mean lower insurance and safety costs, and the railroads can dedicate longer-term resources to the operations and charge less to move the same quantity. In addition, our customers are willing to commit to longer-term contracts given its cost and safety advantages.  We’re really excited about DRUbit™ and are focused on growing this business as Canadian energy production increases.”

It’s just the latest of many projects Benson has supported even before joining the USD legal team in March 2015. He had spent the preceding 15 years as associate and then partner in the San Francisco and Houston offices of Latham & Watkins where he served USD from the outside and helped take a subsidiary of the company public in 2014.

“I was deep in the trenches with the management team as they went through the IPO process,” he recalls. “I got to know the company well and fell in love with them. Luckily for me, it was a mutual thing.”

For the past seven years he’s been at the executive roundtable, sleeves rolled up and advising the company as it further explores clean biofuels and other possibilities in the energy space.

“My role is to act as the legal lens needed to keep our company innovative and efficient in providing solutions to our industry,” he says.

Some challenging times accompanied Benson going in-house, including the bottom falling out of the commodities market during the mid-2010s with midstream companies becoming indirectly exposed to price fluctuations as the upstream companies struggled. Such market conditions come and go, he explains, but by partnering with high-quality customers such as ConocoPhillips, USD betters the odds for enduring future uncertainties.

And with environmental concerns seeming to weigh heavy on everyone’s mind, Benson says USD reduces carbon emissions by up to 30 percent by moving DRUbit™ via rail instead of pipeline. The diluent separated from the bitumen is returned to ConocoPhillips for reuse in Western Canada. Alberta Premier Jason Kenney also has weighed in, lauding USD, Gibson Energy, ConocoPhillips and Canadian Pacific Railway for pooling their resources on a project certain to bolster the provincial economy. 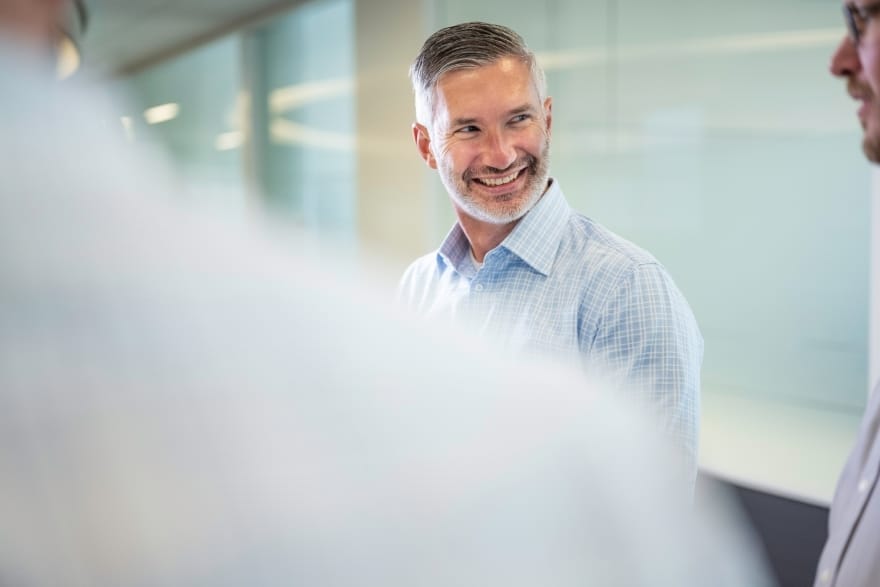 The pending merger of the Canadian Pacific Railway with Kansas City Southern, which currently handles the southern portion of the DRUbit™ journey to Texas, may have some effects on the arrangements, though Benson reserves comment until that deal is consummated. It’s all part of being legal boss in the energy industry that’s become such second nature.

“These seven years have passed so quickly,” says Benson, who oversees two other in-house lawyers and a paralegal. “When you’re happy at work, time really flies. While I was at Latham, I was hyper-focused on a few areas like capital markets and now I’m responsible for all legal aspects.”

A College of New Jersey undergrad, Benson graduated Rutgers Law School in 1998 and logged a couple years with New York based Cahill, Gordon & Reindel before the long stretch with Latham & Watkins. New Jersey raised and having lived in the San Francisco Bay Area, he’s taken well to the Houston area where, as an L&W junior partner, Benson helped grow the newly opened regional office.

Home life also is good with Benson and his wife raising their five children and him coaching his son’s baseball team. He also stays busy with hobbies that include racing half-marathons, brewing his own craft beer, compiling an ever-expanding comic book collection and owning and playing pinball machines. With the worst of COVID-19 hopefully over, he’s hoping he and his wife can resume traveling, though time to do so can be limited.

“So many different things are thrown at you when you’re general counsel,” he says. “Never the same thing twice. It’s a learning curve that I’ll be climbing the rest of my life.” 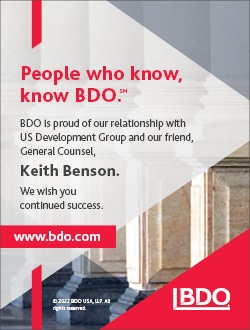 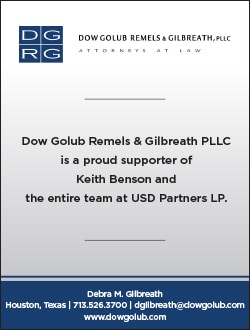 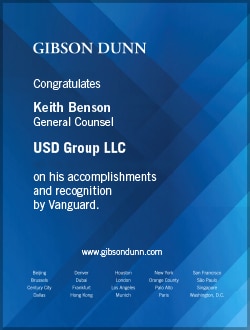 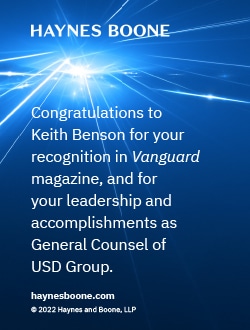